Now, even your furniture can be custom-made | Inquirer Lifestyle ❮ ❯ 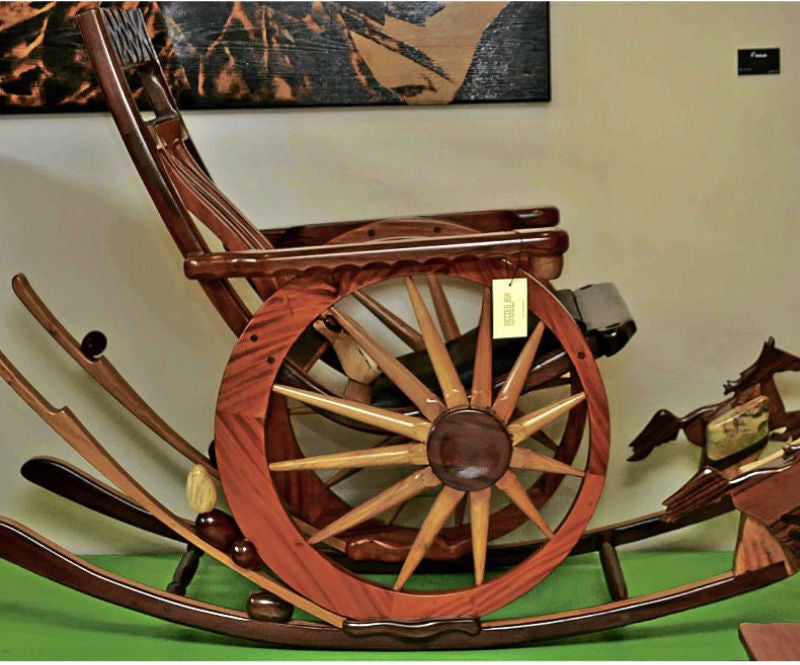 Now, even your furniture can be custom-made

Two years after establishing his “design furniture” company, and a year after featuring his one-of-a-kind furniture pieces of recycled Philippine hardwood in a gallery in Makati, artist and furniture designer Niccolo Jose has expanded his art by offering the public designer doors, handrails and even waterproof wooden sinks.

“Over the past year, I’ve realized that there’s a clientele for customized interiors,” said the US-educated Jose. “We’re adopting to it in a big way by giving people what they want. We’ve started with doors this year. There are door makers out there, but they don’t use solid hardwood.”

Dubbed as Studio 10.10 (short for October 10, which also happens to be Jose’s birthday), the family-owned gallery located at LRI Design Plaza on N. Garcia Street (formerly Reposo) opened a little over a year ago. Jose’s younger brother Jose Jose is his business manager.

Jose, who just turned 26, still continues to make unique furniture pieces, especially statement chairs, even while he expands the company’s menu of services.

Like his earlier pieces, Jose’s latest offerings are fashioned from various pieces of hardwood. But they’re not rigid, one-size-fits-all reclining chairs. On the contrary, each piece conforms to a particular client’s measurements and movements.

“Like, that chair is too small for you,” he said, as this reporter tried one of his reclining creations on for size. “That one over there is more apt for your height.”

Since they’re made-to-measure pieces, not a few people may find them uncomfortable to use. Well, you don’t wear a suit or gown that’s one or two sizes smaller, so why would you sit or lie on a chair built for a smaller (or bigger) person?

By also giving his designer chairs made of various wooden components some wiggle room, the artist also has his client’s comfort in mind.

Since they follow your body’s movements, these chairs aren’t just meant to be sat on. They also double as day beds for those afternoon siestas during weekends.

And since they’re far from cheap, Jose’s pieces appeal to more mature and established clients. His “Contrapposto” collection, for instance, could set you back by as much as P100,000-P170,000 apiece.

“This new collection is inspired by a person’s posture even if that person moves around,” Jose said. “Every piece is inclined because we want people to fall asleep in the furniture.”

Surreal and whimsical touches are still evident in his latest creations. Some pieces reminded us of the human skeleton; a particular rocking chair is adorned with a pair of wheels inspired by the calesa, and even comes with two horse figures that adorn the chair’s front base.

“I want to do something that will challenge me,” said Jose. “For instance, I’m open to doing something that’s feng shui. If you’re born in the year of the Dragon, I can make you a chair with dragon figures. We can customize the chair to suit not only the person’s size, but also his or her personality and background.”

Jose also gives his doors the same thought and attention to detail. Everything about it is also handcrafted and partly based on the client’s specs and inputs. In fact, in feng shui, “25 percent of your house is the door,” he said.

“A door is responsible for the flow of energy in your home. It’s something you open and close every day. It’s all about security and protection. You would always need a door more than you would need a chair,” Jose added.

To date, he has done four doors since he and his team started offering the service in June. The first one, a huge double door for a house in one of Manila’s exclusive villages, became the talk of the entire neighborhood.

“It’s very rare nowadays to find a door made of real and old hardwood,” said Jose. “Although it’s made from recycled wood, I try to make it look like a solid piece based on the design. Like my chairs, my doors look new, smooth, fluid, curved and without sharp edges.”

After finishing environmental studies and studio art at Lewis & Clark College in Portland, Oregon, Jose returned home in 2010 to establish his design company with a huge workshop in Lipa, Batangas. He has more than a dozen people, many of them budding artists, training under him to help realize his vision.

Most of the rare Philippine hardwood he uses comes from his father’s personal collection. His dad, a carpenter and mechanical engineer, built his collection of rare and previously used wood such as narra, kamagong, makaasim and molave over the decades.

Jose imbibed his old man’s passion for these materials, and later took this fascination to the next level by learning how to design and refashion them into functional works of art.

While studying in the US, he worked as a stage carpenter doing sets for theater productions. He also pruned gardens on the side.

“There’s enough hardwood to go by,” Jose said. “We don’t stop sourcing. Some clients would even offer their wood after seeing my work. I appreciate the gesture, but I have to see the wood first. It has to be hardwood and recycled.”

And even if the hardwood was harvested a long time ago, it’s illegal to keep a solid slab. Jose would rather steer clear of such wood and make do with what’s available.

“My philosophy in designing as well as everything I do in life has always been the same,” he said. “Don’t lose what you need chasing after what you want.”