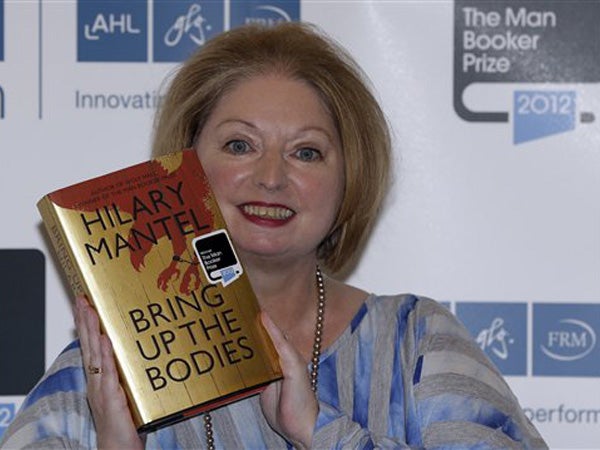 Hilary Mantel, winner of the Man Booker Prize for Fiction, poses for the photographers with a copy of her book 'Bring up the Bodies,' shortly after the award ceremony in central London, Tuesday, Oct. 16, 2012. AP PHOTO/LEFTERIS PITARAKIS

LONDON—British novelist Hilary Mantel on Tuesday made literary history by becoming the first woman and the first British author to become a two-time winner of the Man Booker Prize for fiction.

Mantel picked up the prize, one of the highest profile awards in English-language literature, for part two of her Thomas Cromwell trilogy, “Bring up the Bodies,” at a ceremony at London’s Guildhall.

The 60-year-old won in 2009 with “Wolf Hall,” the first of the historical fiction saga with King Henry VIII’s chief minister as the protagonist.

Accepting her prize, the winner said: “Well, I don’t know, you wait 20 years for a Booker Prize and two come along at once.”

She called the award an “act of faith and a vote of confidence.”

“I know how lucky and privileged I am to be standing here tonight,” she told the audience.

“Now I have to do something very difficult, I have to go away and write the third part of the trilogy,” she joked.

“I assure you that I have no expectations I will be standing here again.”

“This double accolade is uniquely deserved,” he said.

“Hilary Mantel has rewritten the rules for historical fiction. In ‘Bring up the Bodies,’ our greatest modern writer retells the origins of modern England.

The prize is awarded to a specific book, rather than an author, and is evaluated by a group of judges who compile a long list of novels, followed by a shortlist and then select the final winner.

Bookmakers installed Mantel and radical British writer Will Self as favorites when the six-person shortlist, which included authors from India and Malaysia, was announced last month.

Indian writer Jeet Thayil was selected for his work “Narcopolis,” which explores heroin addiction in Mumbai.

Tan Twan Eng’s novel “The Garden of Evening Mists,” which tells the story of a Malaysian former Supreme Court judge who retires from public service in Kuala Lumpur to return to the Cameron Highlands, was also recognized.

Self, a controversial and high-profile British literary figure, was nominated for the first time for his experimental modernist work “Umbrella.”

The list was completed by British authors Deborah Levy and Alison Moore.