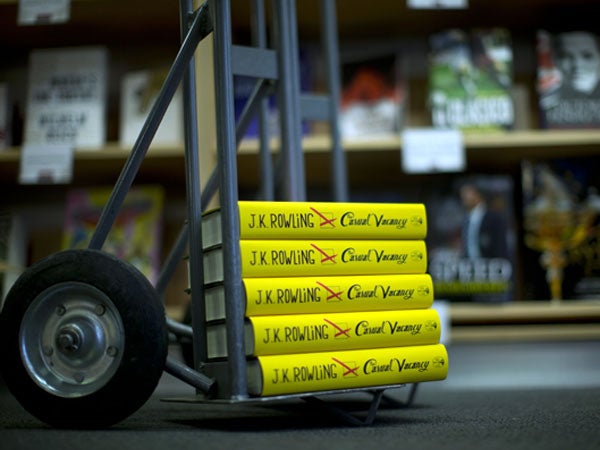 Copies of the "The Casual Vacancy" by author J.K. Rowling stand on a trolley ready to go on the shelves at a book store in London, Thursday, Sept. 27, 2012. British bookshops are opening their doors early as Harry Potter author J.K. Rowling launches her long anticipated first book for adults. Publishers have tried to keep details of the book under wraps ahead of its launch Thursday, but "The Casual Vacancy" has gotten early buzz about references

NEW YORK— Just the mention of her name, J.K. Rowling, had the audience screaming and on its feet.

The “Harry Potter” author spoke before a capacity crowd Tuesday night at Manhattan’s Lincoln Center in her sole U.S. public appearance to promote her first novel for grownups, “The Casual Vacancy.”

Dressed in a dark skirt and dark sweater blouse, Rowling chatted with fellow author Ann Patchett, read briefly from her new book and also responded to pre-selected questions from fans. Rowling spoke before some 2,500 people, mostly women, gathered under the high, golden ceiling of the David H. Koch Auditorium.

The conversation was for adults — Rowling even used an obscenity — but she is returning to children’s stories. Just don’t expect any board books for toddlers — or a new Potter book