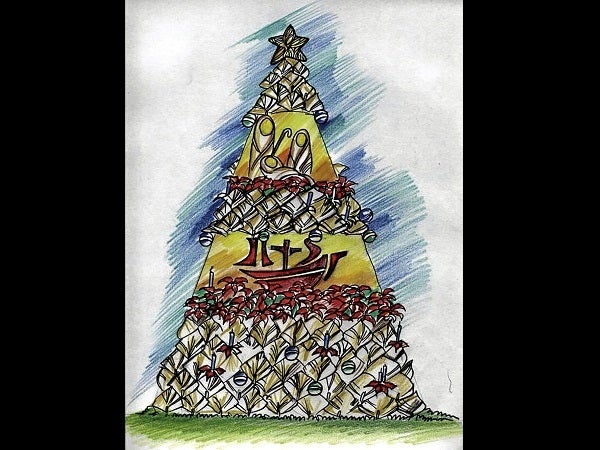 Schoolchildren create Christmas trees for a cause

Participating schools are: De La Salle Santiago Zobel, its “Tree of Hope,” to be made of used books and plywood scraps; Everest School Manila, which will use newspapers to create a tree titled “Have Yourself an Everest Christmas”; German European School Manila and its tree called “Our Christmas Story,” to be built out of toilet paper tubes; Mahatma Gandhi International School, which will recycle shoe boxes covered in green and red wrappers to form “The Giving Tree.” Other participants include MGC New Life Christian Academy, with its “3T: Tree, Technology and Truth” tree, to be built using old CDs and other electronic waste; Miriam College Grade School, which will use corn husks for its “Peaceful Christmas Tree”; Paref Southridge School and its “Tree of Faith,” to be created using plastic spoons; Singapore School Manila and its tree titled “With Love and Light,” featuring scrap bamboo; and Divine Healer Academy in Cabid-an, Sorsogon, the only provincial institution, which will build its “Puno ng Pangarap” also out of bamboo.

The schools, represented by faculty members and two or three students, discussed their tree concepts at a recent press conference in Dusit’s Tosca restaurant.

The use of recycled materials for the trees is the hotel’s way of educating children on the importance of being environment-friendly. It’s also a symbolic gesture for some of the schools.

Old newspapers on Everest School’s tree represent the good news of Christ’s birth, while the rationale behind German European School Manila’s use of toilet paper tubes is that “as the world moves forward, traditions are being flushed away.”

Other trees will be more than ornamental. De La Salle Zobel’s tree, designed like a tapering bookshelf, will contain used books to be donated to one of their adopted schools, Calambuyan Elementary School in Calatagan, Batangas.

Mahatma Gandhi International School’s used shoe boxes for “The Giving Tree” will each contain one gift from the school’s pupils, to be given to their chosen recipients. The tree’s round base will be converted into a table for a daycare center, while the aluminum cans and tabs to be used as decor will be donated to Tahanang Walang Hagdan as materials for canes and wheelchairs.

The trees will be displayed in Dusit’s lobby from Nov. 15 to Dec. 28. This year’s top three winners will be determined solely by votes. One can vote online through Facebook by liking the Dusit Thani Manila fan page, then liking their chosen photo. Or, one can go to the hotel to cast his/her vote (one ballot form for every P500 worth of purchase in the hotel).

This is the third year Dusit Thani is holding its Christmas Tree Project.

The contest opens with a tree-lighting ceremony on Nov. 15. The top three winners will each receive cash prizes, to be donated to their chosen charities.

“The first year, we had 12 individuals [create the trees], and we called the project ‘Unity in Diversity.’ Last year we had families, and so from just one person [per tree], we had six or seven people working on their Christmas trees,” said Dusit Thani Manila general manager Prateek Kumar. “For this year, we took it to the next level by involving children.”

“The Christmas spirit we felt in our first Christmas Tree Project [with 12 individuals] felt so magical, and we just want that magic to grow,” he added.

Ten Christmas trees will be on display—nine from the schools, and one from Dusit.

“Christmas is about hope, the future, giving—all these things are about children, more than anybody else,” said Kumar. “And building a Christmas tree will be like a fairy tale for these children.”