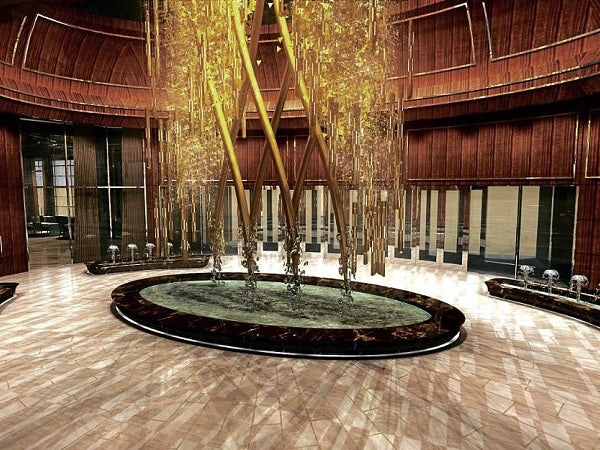 “With $40 (P1,652) in you pocket, you can get a wonderful life experience. You’ll see a beautiful place, be in a waterfall environment, get good service and enjoy great games. Our air-conditioning is very sensitive; you get clean air. Even if you’re not playing, you’ll like the place because it’s smoke-free, tidy, and there are friendly people to take care of you.”

That was the pitch of Bradley Stone, president of Global Gaming Assets Management (GGAM) for Solaire Resort & Casino, which will open in March 2013 at the Pilipino Entertainment City in Parañaque. In a bid to make Manila at par with luxury casino resorts in Las Vegas and Macau, Bloomberry Resorts Corp. (BRC), the parent company, hired the veterans from the gaming and hospitality industries worldwide.

Enrique Razon Jr., one of the country’s richest men and owner of BRC, tapped Michael French as COO to hire the best talents and Stone to manage Solaire, which will consist of the casino and the lifestyle components.

“He didn’t want to do something cheap. His voice was to build a quality, lasting product,” said Stone. Designed by architect Paul Steelman, who has done luxury casinos such as MGM, Solaire is arguably the country’s first well-planned, integrated resort development.

Catering to the mass and premium markets, the first phase of development includes 18,500 sq m of games and slot machines, entertainment areas, international restaurants and 500 hotel rooms. Three-quarters of the area is dedicated to the public and mass customer, another section to VIPs.

Stone explained that unlike other casino-resorts where amenities are spread out, Solaire’s layout makes the casino and gaming area accessible to the parking, the noodle bar, food court and the bars. The VIP enjoys the privacy from the entrance to the lounge.

“You put all the amenities of one market together and the amenities of the other market in another area to make everything convenient for them. I can control the guest experience and not send them all over the place,” said Stone. “Many buildings are haphazard or they add stuff. This is a master-planned building, sensitive to the market segments we are going after. We have a lot of foreign-speaking hosts to look after the guests and have their little world.”

Asked how a luxury brand like Solaire would cater to the masses, Stone explained: “The general public wants good parking that’s accessible to casino floor, have the right slot product—ticket in, ticket out; cash out—which is very convenient. They want quick fast food as they are in for a couple of hours. There’s the noodle bar and the buffet which can compete with the Shang.”

Solaire will dangle incentives to “very good mass-market customers” such as having their own casino and amenities.

One of its special features is Club Solaire, which, said Stone, follows the management rule of 80-20. “Twenty percent of the people, who are really important, make up 80 percent of the revenue. We have a special place to attract that valuable market. The $5,000-customer isn’t going to be in the junket room upstairs. We have to create an environment for them where they get special treatment. They don’t have to stand in line with the $10-customer. If I want to get a snack or dim sum, it’s sitting there for me for free. I don’t have to go to a restaurant or drink at the bar. If I want to go to the restroom, I will have my own.”

There are the VIP rooms which are furnished with private offices, accounting areas and unique mix of games. “With the VIP market, it’s important to build relationships. You get the gaming people who are used to dealing with the high-end clientele and how certain transactions work.”

Stone pointed out that the Philippines has an edge over its Asian neighbors aside from the people’s friendliness and the various tourist spots.

During the press launch, he said with favorable tax regimes, junket representatives (liaisons who organize the trips of players to casinos) and premium customers can get higher commissions.

Donato Alemeda, board director, said Razon envisioned Solaire to be in the league of Wynn or Encore Las Vegas. “The overall experience has to be on the level that nobody has ever seen anything yet in the Philippines.”

With Razon’s investment, BRC became a publicly listed company last summer. Almeda said, “Many foreigners have been buying to Bloomberg. There’s confidence from the foreign market in this project and in the country.”

While the gaming division is headed by another veteran, Dennis Andreaci, hotelier Adrian Ort will manage the non-gaming side which includes the hotels, restaurants and other amenities.

“We would like a customer to come to us for multifaceted opportunities—gamble a bit, drink in a bar, dinner with a friend or loved ones. They can come for special occasions—wonderful private dining rooms for families, wedding anniversaries, entertainment with friends at the lounge. The ante for VIP service is about personalization. Depending on the level of the VIP, there is a helipad and a host who speaks the guest’s language to answer any whim. If the VIPs fly on their ticket, we fetch them on a limousine. The host will be with them all the time. We take care of what they like to have.”

Ort said as a resort-hotel, Solaire provides a casual ambiance. However, the rooms are bigger than the industry standard, 43 sq m. The chairman’s suite is 600 sq m, which is as big as a house. “We want to be lavish with our high rollers,” said the hotelier.

“My first interview with Mr. Razon was straightforward. He said, ‘I want to have the best restaurant in the Philippines,’” recalled Ort.

Wolfgang Fischer left his executive chef post at the Emirates Palace, the world’s most expensive hotel for heads of state, to be Solaire’s culinary director. “The environment of the restaurants alone will be world-class. It’s up to us to deliver the software,” he said. He is batting for Michelin standards which no restaurant in the Philippines has achieved yet.

“My philosophy is simple: Make sure the chef will have all he needs to do the best possible job,” said Fischer. “If you want to run a restaurant, you need support from management.” Best foreign chefs have been hired to oversee the international restaurants although there’s a contingent of Filipino chefs with overseas and local experience.

“Even the baker is world-class to ensure the best bread possible,” he said. Fresh graduates from the top culinary schools can also join the team.

“Chefs must respect the food. If somebody doesn’t have the passion to treat the product right, that person has no space in my team,” said Fischer.

Plans are afoot to work with farmers and agricultural suppliers to customize their food supply for the hotel, given the large volume. With steaks, the hotel isn’t just looking at Australia, the US and Japan but even other parts of the world such as Spain. The public will also enjoy the high standards of the food. For instance, noodles will be freshly made daily for the noodle bar.

On the pricing, Ort explained, “We will provide value for money. It doesn’t mean it’s cheap. You pay for what you get. There are different pricing strategies—from food court, buffet to specialty restaurant.”

Karsten Roettger, Solaire’s food-and-beverage director, added that the experienced managers and chefs who worked in deluxe hotels from oil-rich countries will train the local staff to keep improving the standards.

“The service in the Philippines is very good but what is missing is finesse,” said Fischer.

Although the restaurants will have their own high-tech kitchen, the biggest commissary is dedicated to Solaire’s 4,500 employees, who will be producing thousands of meals daily.

“In the end, you want to wow the customer with fantastic rooms, restaurants and service,” said Ort.