What ‘Portrait of the Artist’ is all about | Inquirer Lifestyle ❮ ❯ 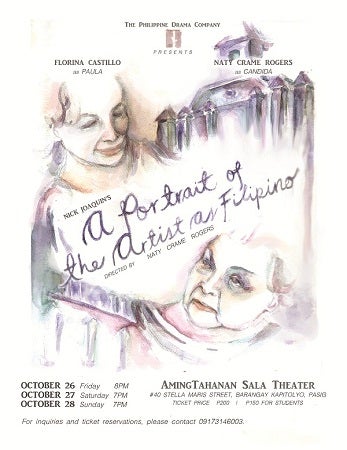 What ‘Portrait of the Artist’ is all about 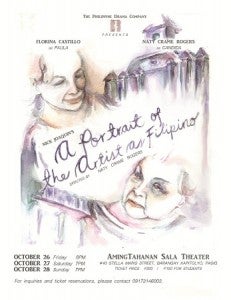 MANILA, Philippines—National Artist Nick Joaquin’s “Portrait of the Artist as Filipino” occupies an unparalleled place of honor in the history, not only of Philippine dramatic literature but in all of Philippine literature as well.

Perhaps it is the poetry in it, the subtle, unspoken pain of the genteel poor of Old Manila struggling to survive in a world their genteel past never anticipated. It is pre-war Manila, just before the bombs fell in 1944.

In Bitoy’s words “while the world was hurrying gaily towards destruction…there was one house that never became a slum.”

What happens in that house is what “Portrait of the Artist as Filipino” is all about.  It is about a great but impoverished painter slowly dying along with the Old Manila.  It is about his daughters Candida and Paula, two women in whom youth and dreams have died but not dignity and gentility, trying to survive the ravages of poverty in an old paternal home which their brother and sister, Manolo and Pepang want to sell.

It is about the young go-getter of a jazz pianist Tony Javier, wanting to make an extra buck out of this situation of desperate poverty getting caught in his own trap.  It is about Don Perico, the Senator who stopped writing poetry so he could earn a living for his family.  It is about Bitoy, the young journalist, trying to interpret for himself and for us, the paradoxes of his times and who takes upon himself the poet’s mandate “to remember and to sing.”  It is about all of them, their choices showing us as the Senator says, that “Life is not as simple as it is in art.”

There are probably countless literary accounts of how Filipinos coped with life in those pre-war years, but not with the exquisite grandeur of Nick Joaquin’s prose and his prophetic interpretation of the human condition.  Something proudly Filipino has become universal.  Something elegantly Hispano-Filipino now belongs to the world.

Nick Joaquin’s “Portrait of the Artist as Filipino” was first discovered by National Artist Daisy Hontiveros Avellana in the Women’s Weekly Magazine in 1952.

She and her husband, another National Artist, Lamberto Avellana, aired a 45-minute adaptation of “Portrait of the Artist as Filipino” over DZPI, with a cast composed of members of the prestigious Barangay Theater Guild performing to a live audience.  Daisy H. Avellana functioned as script editor and played the lead role of Candida.

The play was first staged in a makeshift open air theater at the Aurora Gardens in Intramuros in 1955.

After a two-year run, it was produced as a film by Manny de Leon as a Diadem production opening at the Rizal Theater on August 25, 1965.

It was in this production that Naty Crame- Rogers, then of the Arena Theater of the Philippine Normal College, made her debut as a film actress, playing the role of Paula, Candida’s younger sister.  For her performance in this film, she was nominated for a FAMAS Award as Best Supporting Actress.

From then on, the public image of the sisters Candida and Paula had always been the faces these two great actresses of Philippine theater: Daisy Hontiveros Avellana and Naty Crame-Rogers.

In 1976, Portrait was staged at the CCP and its power and beauty inspired many theater groups, producers and directors to attempt to mount Portrait onstage.

In October 1994, Naty Crame-Rogers, after having seen one director’s interpretation of Portrait, decided to stage her own version of Portrait using the script adapted for film by Daisy Avellana. Somehow, she told us, the play (that particular version) did not quite catch the spirit of the age. And she felt that as someone who had lived through the prewar and the war years, and who had played in the movie version with no less than Daisy Avellana herself, it was her responsibility to pass the Portrait experience on to a new generation.

And so, taking a handful of teachers and a handful of old friends under her wing, she got them ready for a performance, not at the CCP or some other auditorium but right in her own home. This was her “Portrait Odyssey,” perhaps, not knowing then that that odyssey would last for almost 2 decades, and would extend beyond the walls of The Amingtahanan Sala Theater in Bo. Kapitolyo in Pasig out to the University of Santo Tomas, to the CCP, to St. Scholastica’s College and to the School for the Deaf and Blind on Harrison Street, and a Drama Festival in Korea and a US tour in 2006.

Since its opening night in her Amingtahanan Sala Theater to this very day, there has never been a year that did not see a Naty Crame-Rogers production of Portrait of the Artist as Filipino, often in her home more than anywhere else.  Sometimes it was just a reading of the script with a small group of people but Tita Naty never let a year pass her by without paying homage to the Virgin of La Naval through Nick Joaquin’s Portrait of the Artist as Filipino. In her own words, “It is my way of honoring the Virgin of La Naval.”

That, perhaps, is the uniqueness of Naty Crame-Rogers’ October productions of Nick Joaquin’s “Portrait of the Artist as Filipino,” and her uniqueness as an artist and as a teacher as well. To this wonderful woman in whose expert hands many aspiring non-professional actors and actresses realized their dreams, her October production of Portrait is both a prayer and a work of art.

Her mentorship of the young has shown them how life and art and religion can all find unity in a disciplined and well-crafted production of the whole or even of a small part of a great play.  When you step into her sala with its circular ceiling over a round stage, you step into a temple where truth and goodness and beauty are expressions of the greatness of God.

When asked about the genius behind her work, she answers with a smile, “It is not me. It is God working through me.”

And so, what makes this forthcoming October production of Portrait different from all her other productions of the same play? Naty Crame-Rogers who has dedicated her lifetime to the cause of Philippine theater is turning 90 this year. And she has announced that she will be playing Candida for the last time at this production.

And where will she hold this October’s production of Nick Joaquin’s Portrait of the Artist as Filipino? She will hold it where it began.  In the place where her version of Portrait is most loved and appreciated: in her home.

In this setting, Don Lorenzo’s room is the room once shared with Joe Rogers or Daddy Joe, the man Naty Crame-Rogers married. And the rat that Candida so skillfully puts to death is indeed in the kitchen. And the confrontation between the Marasigan siblings happens in the sala and the fiesta scene happens around a beautifully inlaid table covered with a quaint crocheted table cloth. And the few invited guests shall sit quietly within the proverbial fourth wall, sometimes watching the play, sometimes being almost part of it.

Amingtahanan is old, having been built in the late fifties. Tita Naty calls it “the past in the present and the present in the past.” To those of her company who grew up in the theater within its walls, it does not matter that the house has grown older along with them. It is just right for Portrait with its seashells along the stairway and the paintings of a well-beloved son on its walls. And even if someday it is sold to become one of the many urban condominiums that now line Stella Maris Street, it will always be “the house that never became a slum” to the patrons and friends of the Amngtahanan Sala Theater. It will always be a monument to the brave Candidas and Paulas of the world; a symbol of their valiant struggle to hold back the ravages of poverty and age.

The cast is a combination of different casts of years gone by, with younger members of the Naty Crame-Rogers Philippine Drama Company filling in for older ones who could not make it to this year’s production. Tita Naty says it is her swan song. Her motley group of actors holds their breaths and wish she would live forever “to remember and to sing.”

“A Portrait of the Artist as Filipino” will run from October 26, 8 PM and October 27-28 at 7 PM, at the Philippine Drama Company’s Amingtahanan Sala Theater located at #40 Stella Maris St., Bo. Kapitolyo, Pasig. Cocktails will be served after the show.

The play is directed by the PDC Sala Theater founder and directress, Prof. Crame Rogers. She also plays the role of Candida, along with Prof. Lala Castillo who now takes on the role of Paula.