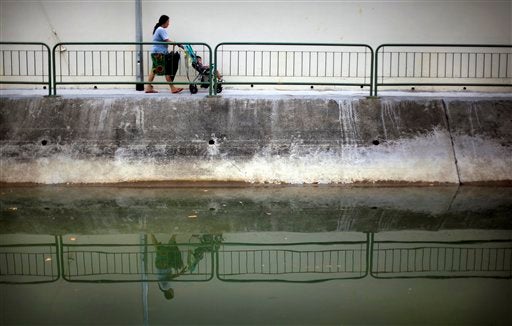 A woman pushing a baby buggy is reflected in a monsoon drain, one of the many which help prevent flooding during rainy seasons in the city-state on Friday Oct. 12, 2012 in Singapore. Singapore has come first among expats for economic considerations, according to a survey by HSBC bank. AP PHOTO/WONG MAYE-E

PARIS—Asia is fast becoming a top destination for professional people and executives who go abroad for their companies, their careers and their bank accounts: the expatriates.

And Europe is largely a place for retirement in the sun, in France and Spain, although Britain and India came top as ideal choices for retirement, a recent survey shows.

An exception in Europe is Germany, which draws in young people boosting their careers notably in technology industries, and Britain, which ranks highly for culture and entertainment.

These are among the main findings of a vast annual survey of so-called “expats” by HSBC bank, published in October. Finance companies managing personal wealth take a close interest in expats who have high earnings and savings and need advice on investment and tax.

The survey draws a global expat landscape in which the so-called “soft” but critical resource of brainpower and special skills is being drawn increasingly to emerging economies.

The expat sun seems to be rising in the east and retiring in the west.

But expats in general are feeling the chill of the cold winds of economic downturn, particularly in Spain.

Five Asian countries ranked in the top countries for economic attractiveness, and four in the top 12 for the overall experience of being an expat.

“Asia is increasingly coming to the fore as a top destination for both financial opportunity and life experiences,” said the head of HSBC Expat, Dean Blackburn.

Singapore is now a top destination, and China is moving rapidly upwards as an attractive place to live and work.

China had leapt up to seventh place this year from 19th in 2011, the survey said. Two thirds of expats in China reported a “marked improvement” in their financial situations.

But to raise families in the great outdoor life, Canada and Australia score strongly; for safety for the children Hong Kong ranks most highly; and for culture London remains attractive particularly with a boost from the royal wedding and Olympic Games.

For easy living, and also in view of retirement, France and Spain offer above all sunshine.

The Middle East is high on the list for young people seeking high earnings, but families have difficulty in integrating, children spend much of their time on computer games, and expats who go there retain strong links with home.

However, the Middle East “is continually improving as a place to live and work,” Blackburn said.

Germany attracts young people keen to develop their careers, with a strong accent on the technology sector, but it is not a popular place for retirement.

But in terms of economic prospects, expats in Germany are “more positive than expats across the rest of Europe” and have “a very positive outlook.”

Expats in Britain were affected by economic uncertainty but the country “ranks much higher for expat experience than we have seen in previous years,” the survey said.

“It seems the cultural events taking place in the country over the past year have helped to boost expats’ views of the country as top destination for entertainment and culture.”

Conversely, there was a tendency for the British to wait until retirement loomed to move to an expat lifestyle.

Many expats in Europe are likely to stay where they are despite economic uncertainty. In particular a high number stay to retire, notably in France and Spain.

“Of the expats we spoke to, over a third living in these countries are retirees, compared to an average of only one in 10 globally,” the report said.

“With great weather and an increased quality of life among the key drivers for expats when choosing their retirement location, it seems that these countries provide the optimal benefits for those looking to retire away from home.”

Uncertainty about economic prospects had caused expats to switch their savings more heavily into long-term investments and property.

The survey came up with two lists of 30 countries ranked according to the overall expat experience and to the overall economic situation for expatriates. These threw up some strong contrasts.

Next to last equal came France, Kuwait and Britain, and last of all Italy.

The survey, the fifth of its type, is described by HSBC as the biggest in the world of expats. It was carried out by the British YouGov market research organisation on the basis of questions put to 5,339 expatriates.