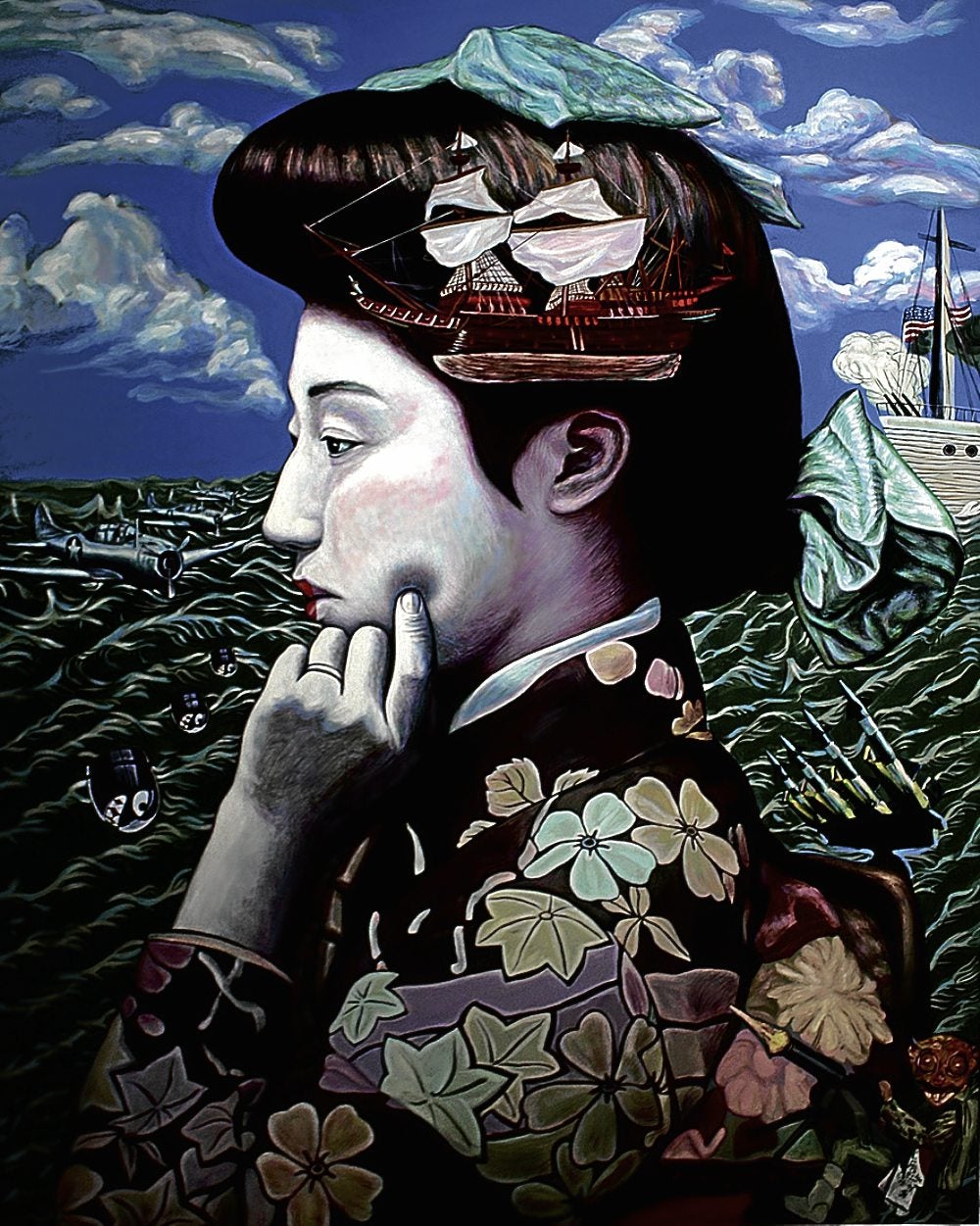 At first glance, one would think that the exhibit “Banzai,” at Galerie Joaquin in San Juan,  is by a Japanese artist evidently because of the dominant geisha images and Nippongo figures depicted in every painting.

But artist Vincent de Pio says he may look Japanese but the paintings are by a Filipino; they’re interpretations of Japanese motifs.

Aside from flaunting the beauty and elegance of geishas, De Pio cast on them a provocative spotlight. The works also make allusions to the Second World War.

“Code of Bushido” depicts a woman dressed in black kimono facing sideways. She envisions an upcoming war as prefigured by Japanese aggressors with their weapons and horses in the background.

The hands of geishas are usually seen occupied with teacups and fans. But De Pio replaces these fancy items with violent firearms, a critique of the patriarchal bases of wars.

In “Banzai,” a geisha with an elaborate origami on her head holds a machine gun.

“Bandits” showcases two women in traditional Japanese attires to which are attached revolvers on one woman and an anchor (to connote naval warfare) on the other.

De Pio says “Sayonara, Kiss your Ass Goodbye” is his favorite. It shows a laughing geisha holding a nuclear weapon. In the background are Japanese martial weapons from the traditional to the most advanced—samurai, guns and tanks.

De Pio says he was inspired by the works of National Artist for Visual Arts BenCab.

“I think this concept came up by accident, I was thinking of something [that would tackle] the past, present and future with the element of war but with a playful [manner],” De Pio says. “I [have been] using the geisha [motif] since 2002, but my approach is not realistic but more on the expressionist side.”

From a distance, the beauty of the Japanese characters is, indeed, very evident. But a closer look gives deeper meanings of the conflicts and tensions that may continue to bedevil relations between Japan and the Philippines as a result of the last war.

De Pio is son of veteran artist Gig de Pio and  a product of the University of the Philippines. This is his third one-man show. Some of the works displayed had been showcased in the recently concluded ManilArt 2012.