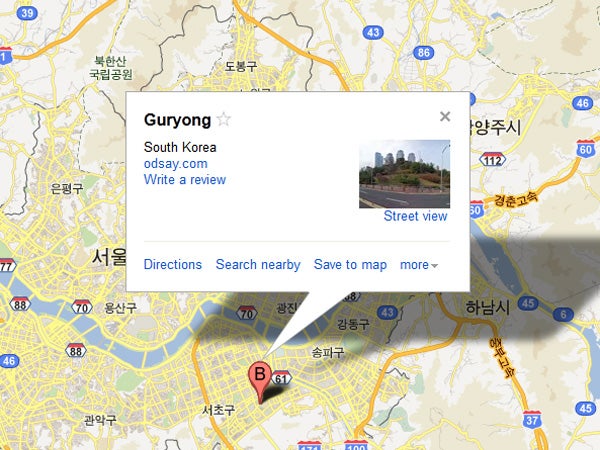 Seoul slum life in the shadow of ‘Gangnam Style’ SEOUL – Shadowed by the high-rises of Seoul’s wealthiest Gangnam district, Kim Bok-Ja, 75, pulls her trolley of folded cardboard through a shanty town that sits uncomfortably in one of Asia’s most developed cities.

At a local recycling yard, Kim smiles thinly as she counts out the meagre cash return she gets for the load of boxes and packaging she spent all day collecting.

“This is all I can do to survive, probably up until I die, because I live alone with no proper income,” she said.

Kim’s home is Guryong – a squalid, sprawling slum of plywood and tarpaulin shacks settled in 1988 by squatters evicted from other areas in a push to beautify Seoul as it prepared to host the Olympic Games.

Nearly 25 years later, Guryong (which translates as “Nine Dragons”) has more than 2,000 residents scrabbling out a subsistence living with Third World poverty levels and little or no proper sanitation.

It’s about as far removed as possible from the opulent, glitzy world of neighboring Gangnam – an upscale district of luxury boutiques and night clubs made famous by South Korean rapper Psy’s global hit, “Gangnam Style”.

Taxi drivers have difficulty locating Guryong, although it is only separated from Gangnam by a six-lane highway and covers an area of 70 acres (30 hectares).

“Our village is Seoul’s biggest slum settlement but it will not appear on any maps,” said Lee In, the 59-year-old deputy head of the Guryong residents’ council.

A significant portion of residents are in their 70s or 80s and live alone, most of them without any sort of state assistance.

“Many are engaged in rough work or odd jobs to earn their daily living,” Lee said. “The fact they don’t starve is largely down to help from volunteers and religious groups.”

One of the many notable aspects of Guryong is the number of wooden crosses visible on the low-rise roofline, marking dozens of ramshackle churches that cater to the community.
Another is that every inch of available land has been turned into small plots where residents grow vegetables to supplement their diet.

A fire in January spread through the flimsy plywood shacks in a matter of minutes, gutting scores of homes, while floods triggered by heavy rains in July last year destroyed a large section of the village.

The only advantage of living in such crude housing is that it can easily be replaced.

“What comes down during the day, we can erect again at night,” said 54-year-old resident Kim Mi-Ran.

The irony of Guryong’s squalor – and the factor most likely to lead to its eventual disappearance – is that it sits on an area of prime real estate which developers have long coveted.

The land is privately owned, but the squatters have been there so long that they have acquired a quasi-legal status buttressed by the municipal government’s decision to grant them temporary residency cards last year.

Earlier this year, a private developer came up with a plan to build low-rent accommodation to house Guryong residents and redevelop the land they vacate.

The Seoul authorities have since proposed a similar plan of their own, and the two proposals have split the community down the middle with a heated debate over which would be more beneficial.

Forcible eviction is an obvious alternative, but the authorities are particularly wary of taking extreme action.

An effort to force illegal tenants out of a building slated for redevelopment in another Seoul district in 2009 triggered clashes that left five people and a police officer dead.

Park Won-Soon, a long-time liberal activist who was elected Seoul mayor last October, has made it clear that any solution in Guryong must reflect the opinions and interests of its residents.

“Under the current mayor, there is no question of using coercion,” a municipal government official told AFP.

For Kim Kyo-Seong, a professor at Chung-Ang University’s graduate school of social welfare, Guryong is a concentrated embodiment of everything that is wrong with South Korea’s rapid economic development.

“It’s a powerful symbol of inequality in our society,” Kim said, citing widening income gaps, the lack of support for a rapidly ageing population and the marginalisation of those left behind by the country’s industrial drive.