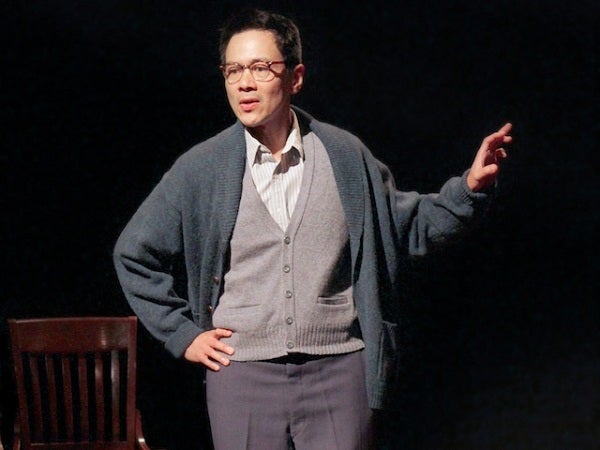 NEW YORK — In the opening moments of “Hold These Truths,” Jeanne Sakata’s eloquent one-man drama about civil rights giant Gordon Hirabayashi, the reflective protagonist recites a Japanese proverb he learned from his father while growing up on a farm in Washington state during the Great Depression: “Deru kugi wa utareru,” or, “The nail that sticks up gets hammered down.”

The saying, meant to impart the importance of conformity in avoiding danger, is a reminder of both the personal and political conflict that plagues Sakata’s Hirabayashi, an unrelenting idealist who struggles with conventional expectations of family and culture nearly as much as he does in his legendary opposition to the U.S. government’s internment of more than 100,000 Japanese-Americans during World War II.

Like any historical play, “Hold These Truths,” which opened Monday at the Theater at the 14th Street Y, presents facts through a prism of literary and theatrical embellishment. The hero in Sakata’s play is framed as a bright-eyed romantic who is coming of age in a world full of injustice and hypocrisy.

Joel de la Fuente plays Hirabayashi with buoyant, magnetic enthusiasm, under the direction of Lisa Rothe, and seamlessly steps in and out of several other roles. The most compelling of the secondary characters are Gordon’s mother and father, whom de la Fuente portrays with impressive definition and amusing cheer.

Hirabayashi remains positive and utterly undeterred by prejudice and a string of bitterly distressing outcomes. He good-naturedly presses on against all odds, ruminates on his love of country and even finds humor in his unenviable predicament.

The Seattle-born son of Japanese immigrants was a student at the University of Washington in 1942 when President Franklin D. Roosevelt signed Executive Order 9066, which authorized the U.S. military to exclude people from designated areas. The order was used to relocate and intern American residents of Japanese ancestry, a majority of whom were native-born U.S. citizens.

Months after the Japanese attack on Pearl Harbor, and amid widespread backlash against Japanese-Americans, Hirabayashi was one of the first to refuse the “exclusion order,” and became the face of the resistance as he fought the order in closely watched court battles. He was convicted and sentenced to 90 days in prison, a verdict that was upheld by the U.S. Supreme Court.

It wasn’t until four decades later that Hirabayashi was vindicated, when a U.S. court in 1987 overturned his conviction and concluded that the government’s internment policies had been based on political expediency, not on any risk to national security.

Hirabayashi died in January at the age of 93. In May, he was honored at the White House when President Barack Obama posthumously presented him with the Medal of Freedom, the nation’s highest civilian honor.

“Hold These Truths,” formerly known as “Dawn’s Light: The Journey of Gordon Hirabayashi,” had its premiere in 2007 and has received stagings around the country, including theaters in California, Chicago and now New York.

The show is one of two plays in Epic Theatre Ensemble’s election-season series that takes a sociopolitical look at what it means to be American. The other play is “Dispatches from (A)mended America,” a documentary theater piece about the 2008 presidential election by Brandt Adams and Godfrey L. Simmons Jr.

Performed in one act and about 90 minutes, “Hold These Truths” provides a concise examination of a fascinating chapter in American history, but also presents Hirabayashi in a more intimate light, revealing internal pressure he faced from family and friends who pleaded with him to put his principals aside in the name of personal safety.

Sakata’s Hirabayashi also struggles to resolve conflicts arising from his strong ties to Japanese culture and his romanticism of American life, a society that often confounded him with a frustrating mix of possibility and limitations.

His Supreme Court defeat leaves him disenchanted with the body, which he had previously regarded as being “above ordinary weaknesses.”

“In my emerging understanding,” he explains, “they became a group of mere people, endowed with all the noble and ignoble qualities of other human beings.”

Despite the shift in his outlook, he remains steadfast in his devotion to the Constitution. “Most importantly, I begin to distinguish between the Constitution and the people entrusted to uphold it.”