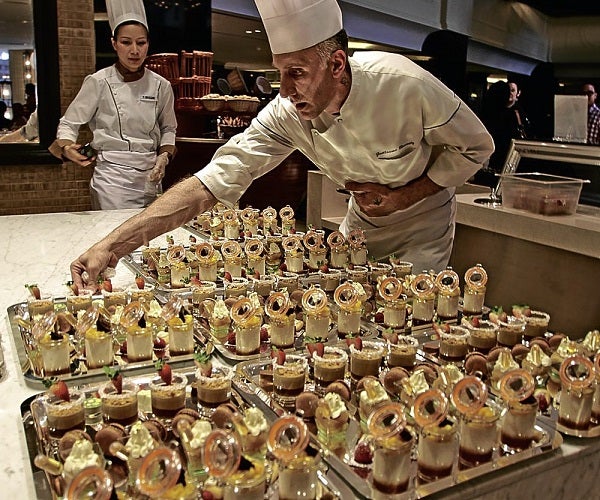 After over a year of restoration work, the Spiral, which has been damaged by Typhoon “Pedring,” is finally reopening on Nov. 8.

The flagship restaurant of Sofitel Philippine Plaza Manila is not taking any chances as far as disaster-preparedness is concerned. Measures have been mapped out to prevent a repeat of the Sept. 26, 2011, incident when a storm surge off Manila Bay flooded the restaurant.

“As you all know, we faced our adversity in September 2011,” said Chanelle Garvey, Sofitel’s director for sales and marketing, during a sneak preview-cum-press conference last week for Spiral. “But, as the saying goes, with adversity comes great opportunity. And the opportunity that we’ve had is to recreate the most awe-inspiring dining destination not just in Manila but in Asia-Pacific and eventually in the world.”

Since the luxurious bay front spot has been Sofitel’s most priceless feature, it must stand strong against the harsh elements. The hotel management has contracted foreign engineering experts to reinforce its climate-change defenses and prevent another flooding.

“We’ve put up additional walls around the area to protect the property perimeter,” said Goran Aleks, Sofitel’s general manager. “We’ve also ensured the drainage is open and clear.  We constructed a trench canal to enable the water coming in the hotel to be diverted back to Manila Bay. What happened last time was that the water that got in had nowhere to escape.”

Now, in case of strong typhoons, 10 submersible pumps are ready to redirect overflowing water to Manila Bay. An onsite weather station has also been set up to measure wind speed, direction and rainfall intensity, which provides hotel management sufficient information to determine the necessary level of action during bad weather.

A sneak peek into the new Spiral showed us a brighter, fresher dining experience. The refurbished Spiral, of course, still has the magnificent Manila Bay as backdrop.

The renovated look also has Spiral drawing attention to its grand spiral staircase leading to the vast dining area that seats up to 452 people, including those in private dining rooms.

There are a lot to take in visually: the marvelous 21-ft high metal sculpture, “Rhythmic Movements,” by Ed Castrillo, is still there, behind the iconic Spiral staircase; and two more 7-ft high brass sculptures of the sculptor at La Veranda; the four giant capiz chandeliers that illuminate the entire space; the lustrous white marbles as buffet tables, glowing glass counters, frosted glass doors; and the stylish men and women servers whose beige-black-and-white tinted uniforms were designed by Rajo Laurel.

The new design was conceived by Spin Design Studio of Japan, the team responsible for the original Spiral and other world-class projects, such as the new restaurants of Ritz Carlton Hong Kong.

Highlight of the new Spiral is La Veranda, an indoor trendy lounge that opens to an outdoor terrace with four gazebos leading to the iconic lagoon-shaped pool the hotel is famous for. One can unwind, sit back and literally watch the sky from the comfort of a glass-enclosed lounge while sitting in the Parisian-style bar.

“To create the new Spiral, we felt we needed an inspiration,” said Aleks, who also revealed the P500-million budget for the renovation. “So, the team traveled around Asia and Europe in search of the best dining concepts and came up with 21 different dining ateliers. The idea was to bring the authenticity and warmth of the traditional French markets and Asian hawker stalls into a five-star hotel setting.”

He added: “We also like to bring the back of the kitchen in front of the restaurant. We bring the chocolate room in the midst of the dining area, including the ham and cheese room and baking room to show how croissants are actually prepared. It’s a fun open area, much like a bistro in Paris in the 1930s.”

The new concept presents more elaborate open kitchens and cooking stations that treat diners to actual food preparation. Spiral brings the kitchen to the forefront where guests can witness the chefs in action.  This encourages interaction between diners and chefs.

Diners can interact with the friendly staff behind the buffet counters and actually ask them how they want their food done. After cooking, the food goes straight to the diners’ plates.

Yes, you won’t see any chafing dishes in the room anymore.

The new Spiral is divided into 21 dining ateliers. In France, an atelier is an artist’s special workshop, and in Spiral it is where secret recipes are masterfully prepared right before diners’ eyes. The range of cuisines is expansive and the attention to detail for each dish is like the focus of an artisan on his craft.

The Atelier is headed by executive chef Eric Costille, who will work alongside other award-winning chefs from all over the world, some of them with over 20 years of culinary experience and who have won medals in different competitions around the world. These chefs include executive sous chef Arnold Guevarra, executive pastry chef Guillaume Bonnety, executive Chinese chef Chee Wah Mok, Western chef de cuisine Anne Cecile Melle Degenne (the only woman in a brigade of six male chefs), Indian chef  Halim Ali Khan, Thai chef Romeo Malate, Japanese chef de cuisine Hiroaki Yamaguchi and Korean chef Kyeongho Lee.

The 21 Ateliers are within the buffet lineup. They include Salad and Appetizer (fresh locally grown produce and organic veggies will be tossed for you by the chefs with your choice of home-made salad dressings); L’Écailler (fresh seafood sourced from all over the world); L’Epicerie (a variety of premium aged hams, smoked fish and artisanal cheese from France, Spain, Italy, Germany and Switzerland); Hot Japanese (traditional grilled seafood, meat and vegetables cooked at the robata or at the teppanyaki); French Stove (homemade seared foie gras, roasted meat and carving); Rotisserie (roasted meats); Wood-Fired Oven (freshly cooked pizzas); Churrasco (skewered steaks and seafood); North Indian (fiery and spicy treats of northern and southern India); Asian Noodles (hand-pulled Asian noodles).