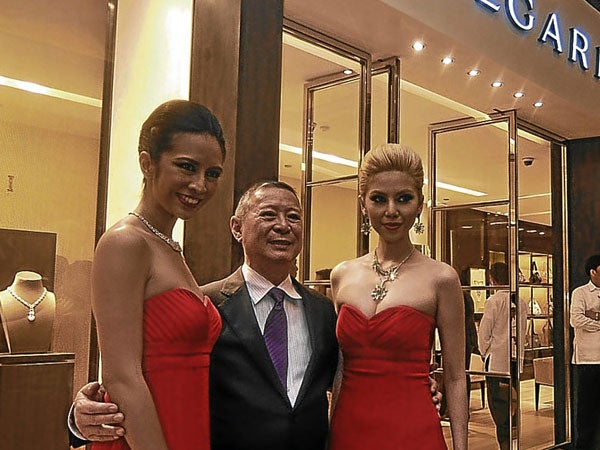 Bulgari now has five stores in the Philippines with the recent opening of its newest branch at Resorts World’s Newport City mall in Pasay City. With a floor space of 81-sq.m (compared to Bulgari’s 124-sq.m flagship store at Greenbelt), it’s the jewelry brand’s third largest store in the country catering to a considerable number of gamers, tourists and retirees.

The move was expected, as Bulgari is present in all Resorts World casinos in Asia. Resorts World Manila is a joint project of Andrew Tan of Megaworld and Malaysia’s Genting Group.

There was no need for a marketing study, said Katigbak, since Bulgari has a captive market in all Resorts World properties.

“That’s why they gave us a prime spot right beside the casino entrance,” he added. “We cater mostly to casino goers, both Filipinos and foreigners. In fact, a good number of our customers are rich Filipino retirees with plenty of time to spare. Once they’re done playing at the casino, they go around the mall and shop.”

Gamers can be a superstitious lot, Katigbak said. Not a few of them have this strange ritual of initially going around the mall, including the Bulgari store, to look for items that catch their fancy. Then they would go to the casino to try their luck.

“Once they win, no matter the amount, they would usually go back to the store where they saw the item they like and buy it,” Katigbak said. “More than anything else, they consider the item lucky.”

Aside from rich Filipinos, the mall also attracts a considerable foreign clientele, particularly Chinese and Korean gamers. Several factors are working in Bulgari’s favor with its decision to open at Newport: the casino’s proximity to Manila’s three international airports and the fact that Resorts World markets its Manila property internationally.

“Some tourists go here straight from the airport and gamble all day,” said Katigbak. “They don’t go out anymore. And this mall isn’t that far from Makati. It’s just a 15-minute drive from Makati if you take the Skyway.”

“We just have more product lines, which more people can appreciate,” said Katigbak. “The same quality and attention to detail Bulgari gives its jewelry can be seen and experienced in its other product lines—from the watches down to the accessories. Only the finest materials are used.”

Bulgari’s global thrust of strengthening the position of its accessories and other non-jewelry offerings is reflected in the look and feel of its newest branch. Unlike, say, its Greenbelt store, the one in Newport has less marble and more metal components with a more textured, uneven and bronzy hue.

“Before it was more of marble and wood,” said Katigbak. “This new, brighter look is more customer-friendly and less intimidating. We’re following Bulgari’s direction of attracting more customers by making the store more accessible.”