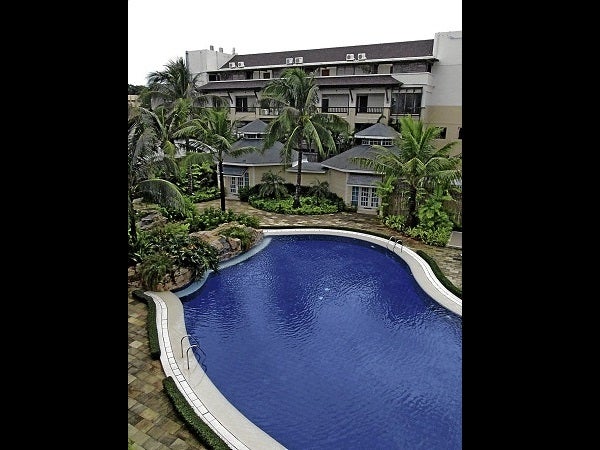 For students on a budget, going to Boracay means waiting for “piso” fares with friends and scrounging for the cheapest beachfront accommodations. But  for those who have grown older and started working for a living, it’s now less about the action and more about rest and recreation, even if it means spending a little more than usual.

Naturally, the idea of an open-space resort a couple of minutes’ walk from the Station 2 stretch of sand is appealing; it is far enough from the nightlife noise, but close enough to the beach and the many establishments along its stretch.

A sprawling, 2-hectare resort with more than 200 rooms, two giant swimming pools with bridges and gazebos, beautifully tended gardens, and a koi pond, Boracay Garden Resort is akin to a hidden oasis nestled just behind the busiest parts of the island. It also houses its own fitness center, business hub and al fresco restaurant called the Garden Café, which offers a sumptuous themed buffet on a daily basis.

Even during the off-peak season, the resort is almost fully occupied, mostly by Korean nationals. It may be somewhat of a coincidence to learn that it was formerly a Korean-owned place called Hotel Seraph, which was bought by the Henann Resorts Group in 2009. The group also operates Boracay Regency Resort and Spa and Regency Lagoon Resort.

“I got the resort by accident. I was not really looking for any new property to develop in the island at that time,” said Henry O. Chusuey, chairman of Henann Resorts Group. “I was surprised when the owner came to see me and offered to sell Hotel Seraph.”

Rhe resort has been enjoying a healthy occupancy rate all year round since its rebirth. A new wing housing a total of 54 rooms is currently underway, which will be open to the public early next year. As of this writing, eight new rooms—one Executive Suite and 7 Grand Rooms—have been unveiled.

Designed by Chusuey himself, the rooms boast of tasteful, contemporary Asian interiors in subtle earth tones against a stark white background. The Grand Room has two beds (one queen-size and one single), a sitting area, a 32-inch LED TV, and a private balcony overlooking the resort grounds, among other amenities.

Meanwhile, the Executive Suite has a king-size bed and a living room, two 40-inch LCD TVs, a spacious marble-and-granite bathroom with a separate bathtub and shower area, and its own corner balcony offering a prime view of the grounds.

With other facilities like the gym and café within easy reach, how about an in-house spa? As it turns out, there appears to be no need for it; the Garden’s sister hotel, Boracay Regency Resort, has its own world-class spa, Kai Spa, which is located just a stone’s throw away. 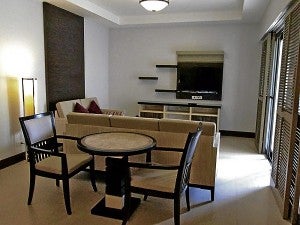 Sure, you can always get a dime-a-dozen massage on the beach, but not if you’re an overworked yuppie who’s willing to shell out at least a couple thousand bucks for some intensive mind-and-body pampering.

For us, the latter meant an hour and a half of lounging in a sauna or jacuzzi followed by expert spa treatments in artfully decorated massage chambers, not to mention relishing the unique ritual performed by the masseuses before and after the treatment. Much like the resort, you really do get what you pay for.

“Reasonable rates, excellent food, quality service from caring employees, prime location and satisfied guests make a successful hotel business,” said Chusuey. Actually, that about sums up the plus points we’ve picked up from our stay. It was like a private luxury getaway in the midst of a public vacation hotspot; it’s perfect for people who want to experience the famed Boracay scene but need a little room to breathe, literally and figuratively.

It seems hard to imagine how this kind of open space still exists in the middle of all that commercialized hustle and bustle; even more so when it’s actually in the process of expanding. Of course, that extra space comes at a small price. It may not come as cheap as the ones we were used to as students on a budget, but in a crowded place like Boracay, you know it’ll be well worth it.