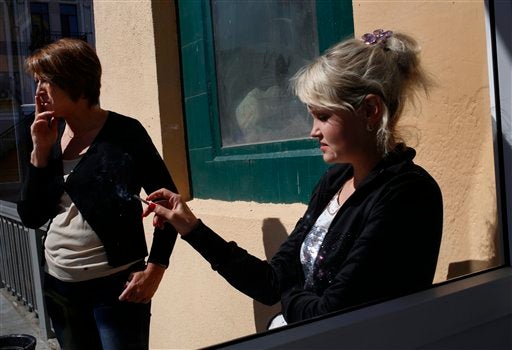 Women smokers who quit before 40 gain nine years in lifespan

PARIS – Women can add nine years to their lives by quitting smoking before the age of 40 but still face a 20-percent higher death rate than those who never smoked, a study said Saturday.

Published in The Lancet, a survey of nearly 1.2 million women in Britain showed that smoking throughout adulthood chopped on average 11 years off lifespan.

These results echoed the findings of earlier research conducted on men.

Among women who kicked the habit before the age of 40, the researchers measured an average lifespan gain of more than nine years compared with those who never stopped.

For those who quit before 30 the gains were even bigger — about 10 years.

“Whether they are men or women, smokers who stop before reaching middle age will on average gain about an extra 10 years of life,” study co-author Richard Peto of the University of Oxford said.

But the paper warned this did not mean that it was safe to continue smoking until 40 before quitting.

“Women who do so have throughout the next few decades [of their lives] a mortality rate 1.2 times that of never-smokers. This is a substantial excess risk, causing one in six of the deaths among these ex-smokers.”

In Europe and the United States, the popularity of smoking reached its peak among women in the 1960s, decades later than for men.

The Lancet study is one of the most extensive probes into the impacts of smoking on this generation of women, the first likely to have smoked substantially throughout their adult lives.

The research is part of a vast survey that enrolled 1.2 million women in the UK between 1996 and 2001. The volunteers were asked to detail their smoking history, and were followed for an average of 12 years.

The women were on average 55 years old when they signed up. Twenty percent of them were smokers, 28 percent ex-smokers, while 52 percent had never smoked.

The researchers found that the group of women who continued smoking had three times the overall mortality rate of never-smokers.

While the risks increased with the amount smoked, “Even those smoking fewer than 10 cigarettes per day… had double the overall mortality rate than never-smokers,” warned the study.

It also cautioned against so-called “light” cigarettes, smoked by most of the women in the study.

“Low-tar cigarettes are not low-risk cigarettes and… more than half of those who smoke them will eventually be killed by them,” the authors warned.