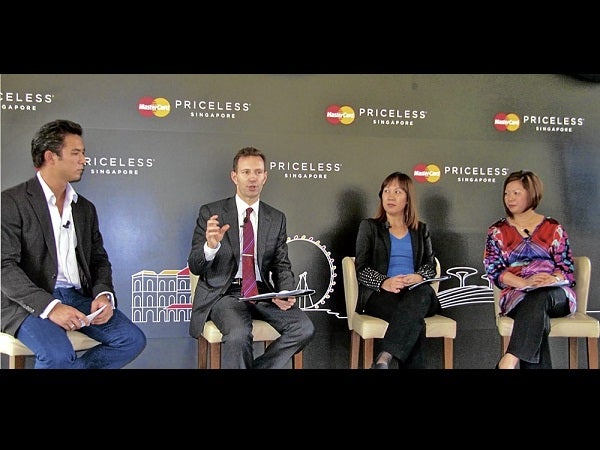 You may have deep pockets, but as they say, there are certain things money can’t buy.

For one, access to certain events here and abroad may be by invitation only. It’s this exclusivity, especially if shared with friends and loved ones, which makes such experiences priceless.

MasterCard has launched Priceless Singapore, a campaign that offers locals and visitors to the bustling city-state a selection of “curated” experiences in shopping, dining, entertainment, travel, art and culture, sports, and other family-oriented activities.

When Lady Gaga, for instance, blew into town for a three-night concert a few months ago, a select group of MasterCard credit, debit and prepaid cardholders were invited to MasterCard’s VIP suite at the Singapore Indoor Stadium, dancing, jamming and having a good time as the pop star sang  one hit after another.

“Unlike most everybody else, they had such a unique perspective that they could almost count Lady Gaga’s false eyelashes,” said TV personality Dominic Lau, host of MasterCard’s afternoon press conference at Equarius Hotel in Sentosa.

That happened months before the launch of Priceless.

Before the exclusive invitation to the Lady Gaga concert, some cardholders used their MasterCard to buy Lady Gaga tickets. As a treat, MasterCard gave them either free access or upgraded their seats to the VIP suite.

People behind Marina Bay Cruise Center, which was days away from formal opening, made an exception for MasterCard.

Launched in 1997, Priceless has morphed into Priceless Cities, a global program unique to each participating city and its denizens and visitors. Apart from Singapore, New York, Chicago, London, Sydney and Beijing have their Priceless offerings.

These cities, according to one of the company’s news releases, now offer MasterCard holders “a program that takes the long-running and iconic Priceless brand from one that celebrates Priceless moments to one that enables and brings these Priceless experiences to life.”

Although the mechanics are similar the world over, each city has offerings unique to the place and “passions” of its cardholders.

The campaign is not to be confused with discount offers and loyalty points earned on purchases on MasterCard. There would be no discounts, actually.

“We want to add to our clients’ experiences beyond what they normally derive from their purchases,” said Filipino Maripi Jalandoni, MasterCard group head, regional marketing Asia-Pacific, Middle East and Africa. “We have an existing understanding with merchants on what they can deliver in terms of surprises and experiences rather than just plain discounts.”

Mounting it in each city isn’t as easy as it seems. In Singapore, for instance, MasterCard combed the city-state, based on its so-called passion pillars, to find the right merchants which would satisfy a greater number of cardholders.

“After selecting these merchants, we asked those willing to participate to come up with their unique and creative offers that could satisfy residents and visitors,” said Jalandoni.

There are exclusive offers for MasterCard elite or gold cardholders, but there are also offers available to those holding silver cards. According to Jalandoni, a cardholder need not log on to www.priceless.com to enjoy certain offers. Some, like the 24-percent discount to entrance tickets to Universal Studios Singapore, can be enjoyed in the ticket counter.

“Registration online allows us to send you invites,” said Jalandoni. “It also allows you access to some of the more exclusive offers, but there are offers that are available even when you show up at the merchant. At Universal Studios, for example, you can go to the counter and before buying tickets (using your MasterCard) say that you’d like to enjoy the MasterCard promotions.”

Regular MasterCard users and frequent travelers can log on and register to get free and regular updates. Being in the know would help them maximize MasterCard’s growing list of priceless experiences.

According to the latest MasterCard Index of Global Destination Cities released in June 2012, Singapore placed fourth among 132 cities, where international visitor arrival was concerned, and fifth in visitor-spend category.

Priceless Singapore benefits not only MasterCard cardholders based in Singapore, but also as many as 13.2 million inbound visitors to the city. A little over 41 percent of inbound visitors from Singapore come from Southeast Asia, including the Philippines.

“In Singapore, our biggest obsession is food, and shopping is our national pastime,” said Singapore-based New Zealand national Matthew Driver, president, Southeast Asia MasterCard Worldwide, in a press statement. “We have great attractions that have reignited our love for our city, and world-class entertainment, arts and culture gravitate here.”

Sophia Ng, Singapore Tourism Board’s assistant chief executive for marketing, said in a press statement: “Consumers today are well-traveled and discerning. They seek exclusive offers and experiences that cater to specific interests and needs. We feel privileged that MasterCard has selected Singapore as the first Southeast Asia city in their Priceless Cities campaign.”

“There are plenty of global cities that we want to connect. I must be honest that Manila is not part of the first wave. But clearly, it is also emerging as a destination,” Jalandoni said.

One thing is definite. Even though offers from MasterCard’s list of participating merchants change, as long as the Priceless campaign remains sustainable, it’s here to stay.