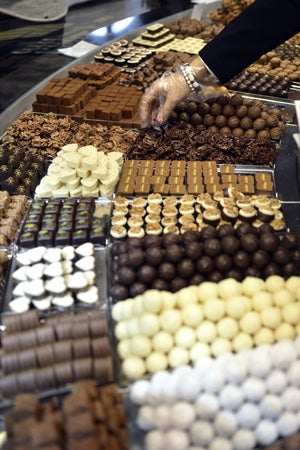 PARIS – History is coming full circle: borrowed from the Aztecs four centuries ago, perfected for the palate by the Europeans, chocolate is conquering new worlds, with sales booming from Asia to Brazil.

Every second, 95 tons of chocolate are wolfed down around the world, or three million tons a year, according to figures supplied by the annual Salon du Chocolat fair, which kicks off Wednesday in Paris.

The globalization of chocolate is most striking in Japan, where annual sales are soaring by 25 percent and French chocolatiers are feted like stars while their Japanese counterparts now rank among the world’s best.

“Japan has converted en masse to chocolate in the past decade, with chocolate Salons in seven different cities,” said Francois Jeantet, co-founder of the Paris fair, which has spawned 21 sister events from New York to Shanghai.

For the Salon’s annual fashion show featuring life-sized chocolate dresses, this year’s model is a kimono-inspired number created by French chocolatier Frederic Cassel – who has three stores in Japan.

“We wanted to express Japanese tradition, cherry blossom in the wind,” in the long sleeves with chocolate flowers, said Cassel, who worked to a design by a young fashion student, Audrey Lempeseur.

The 15-kilo edible dress – a month in the making –will be slipped on just moments before the show, lest it should melt under the spotlights.

Afterwards, it will be shipped straight to Japan.

According to Jacques Pessis, president of the highly serious Chocolate Crunchers’ Club which each year rewards the best world chocolates, France and Japan are the current masters of the game.

“Thirty years ago Belgian and Swiss chocolate ruled the world. These days French chocolate is known the world over. And more and more Japanese chocolatiers, taking their inspiration from the French, are truly excellent.”

Japan aside, chocolate sales are also growing 30 percent year on year in China, while in India — even though one in two Indians have never tasted chocolate — growth is 20 percent, for a treat taken ultra sweet and milky.

“Nearly every country in the world is now part of the chocolate trade, including Asian countries and their colossal potential markets,” said Jeantet and his fellow founder Sylvie Douce.

Producer countries like Brazil have turned into major consumers, while others like Vietnam or Indonesia are moving into cocoa growing.

“In Brazil, the market is going through the roof,” said the master chocolate maker Stephane Bonnat.

“Production-side, the country has shifted these past six years towards fine, high quality cocoa. On the consumer side, I had sold my whole stock of chocolate bars within half an hour at the first fair in Salvador de Bahia in July.”

Bonnat works with 42 small-scale farms around the world. Like him, many chocolatiers now foster direct ties with cocoa-growers, who also take part in fairs, Douce explained.

“Different worlds have come together, and it has helped to vastly improve the quality of both cocoa and chocolate,” she said.

Some 200 chefs from around the world are set to converge on Paris for the 18th edition of the fair, which draws some 100,000 visitors each year.