In her landmark book “The Struggle for Philippine Art” (1974), Purita Kalaw-Ledesma, founder of the Art Association of the Philippines, devoted a chapter to the National Artist Carlos V. Francisco, better known by his nickname Botong: “Botong Francisco and the Search for National Identity.”

She wrote: “His greatest preoccupation was that his art should serve the people [thus anticipating the rallying cries of a younger generation]… Aware that the artist of his time had alienated himself from the people, Botong immersed himself in his beloved hometown [Angono, Rizal].”

Thus, “he painted the everyday happenings in the life of the people, he painted them at work, at play, in the kaingin and rice fields, and in the town fiestas and fluvial parades. He recorded the customs of the times.”

Ill with consumption and refusing to see doctors, he died on March 31, 1969, after complaining of dizziness and coughing up blood. He was buried a few days later, and all of Angono turned out to bid goodbye to  the great artist who had immortalized the town.

It is Botong’s birth centennial this year, and the art community is celebrating with a year-long calendar of events which started Sept. 18 at the Museum of Arts and Sciences of University of Santo Tomas (where Botong taught with fellow National Artists Victorio Edades and Vicente Manansala), and will end with a program at University of the Philippines Vargas Museum in November 2013.

Angono was represented by Mayor Gerardo Calderon; Carlos “Totong” Francisco II, Botong’s grandson and an abstract painter; and students from the Blanco Family Academy, who did on-the-spot paintings during the occasion. A film highlighted the life and works of Botong.

Program host was actress Cherie Gil, who interviewed Francisco II; Ino Manalo, executive director of the National Archives; and Tingting Cojuangco, socialite-art buff who has a doctorate in History from UST.

Francisco II said “the pressure was always there to be like my grandfather, and that is why my art veered toward abstraction.”

Manalo, author of a book on the National Artist, said that, “In addition to his works, he did work for the community, helped in the fiesta, did backdrops for plays in school, and restored artworks used in the procession.” 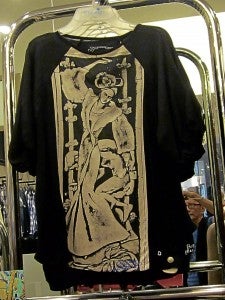 He added: “He was close to his community, and that is what was universal about him.”

Cojuangco said: “You can do an amazing job by teaching through fashion. The colors, the combinations, they all come together. You can see in the paintings of Botong a history of the Philippines. It is important to know your history… Through fashion, you can introduce art and be proud you’re Filipino.”

The highlight of the program was the fashion show. Not being a fashionista, in fact, bored to death by any fashion show, I wondered what the unassuming Botong would have thought of all those foreign and foreign-looking mannequins sashaying around with blank, expressionless faces. (Don’t they enjoy what they’re doing?)

On the other hand, Botong was a romantic who idealized his women on canvas. And so he might have been amused by it all.