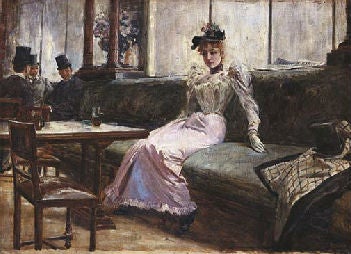 MANILA, Philippines—The Government Service Insurance System and the National Museum has kicked off implementation of a partnership formalized in February and meant to make the GSIS’ historical as well as high-value paintings more accessible to the public.

On Monday, the GSIS and the museum highlighted their team-up with the transfer to the latter of Juan Luna’s “Parisian Life.”

Also under the partnership, the museum has named an area within its National Gallery as the Government Service Insurance Wing, which covered three large galleries on the third floor and which was opened on Monday.

GSIS president and general manager Robert G. Vergara said in a statement that through an agreement with the museum, the state pension fund would transfer the management of its art collection to the latter.

Vergara said the arrangement meant “to preserve, maintain, secure and promote the collection” and also to extend to GSIS members the privileges and benefits on the use of museum facilities that its other sponsors, donors and benefactors enjoy.

“We are happy to partner with the National Museum, the institution tasked to preserve and promote the country’s cultural and artistic heritage,” he said. “Exhibiting our collection in the museum makes it accessible to a wider public.”

Other art works in the GSIS collection include those by Juvenal Sanso, Jose Blanco, Manuel Rodriguez Sr. and Romulo Galicano.

Vergara said the transfer of the GSIS art works to the museum was an offshoot of the continuing review of policies by its board of trustees.

He also said that the GSIS made this decision because “preserving and maintaining an art collection is beyond the mandate of the GSIS as a social insurance institution and insurer of government properties.”

For its part, the museum is said to be working on the declaration of the “Parisian Life” as a National Cultural Treasure through a duly designated panel of experts.

The GSIS’ purchase of Luna’s masterpiece for over P46 million in 2002 raised a controversy over whether government workers’ money was being used properly. By 2010, the painting is estimated to be worth P200 million.