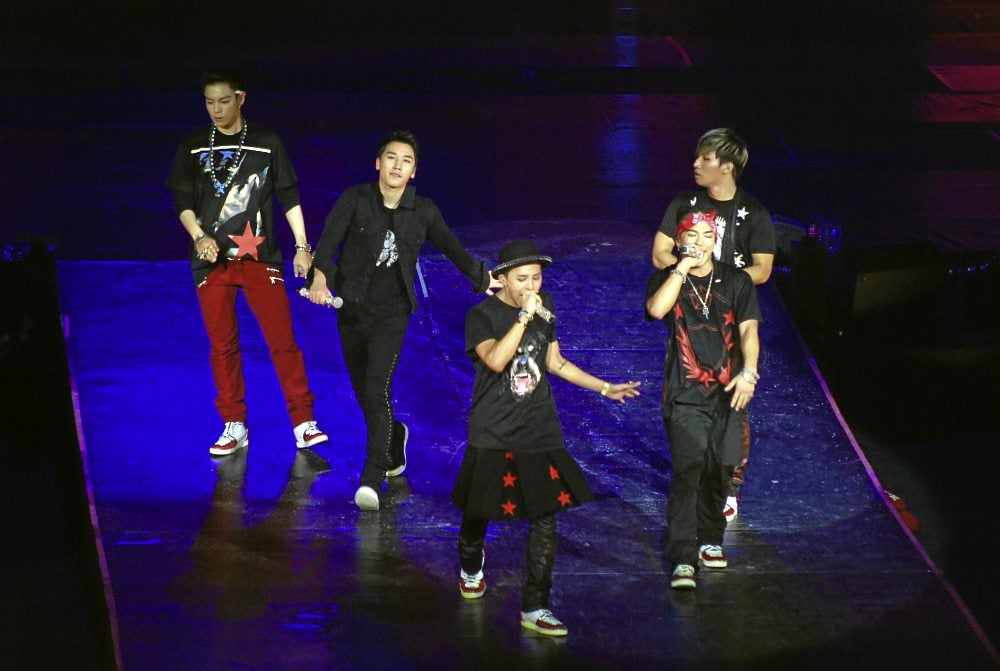 It’s four o’clock on a rainy October day in Metro Manila, but it’s evident that the rain won’t keep the hundreds of people patiently waiting outside the Mall of Asia (MOA) Arena from enjoying the evening’s event.

Some of these people clutch small banners and wear matching T-shirts to show their support for the performers that night. Others have dyed their hair in extraordinary colors such as electric blue and bright pink. They smile and chat happily, all sharing their excitement about one topic—the long-awaited concert that is mere hours away.

Inside the arena, a different scene is unfolding. Five men stand on the stage, testing their microphones and walking around, greeting the few fans that have been invited to watch their rehearsal viewing. G-Dragon, the leader of this group, stands coolly on a golden Segway in vintage shades, quietly eyeing the fans that have come to show their appreciation before the show.

Taeyang, another member of this group, walks around and dances a mere two feet away from the fans, touching their hands and singing happily for them.

It’s the day of Big Bang’s Alive Concert Tour in Manila, and everyone is brimming with anticipation for the concert. Big Bang is a five-member Korean boy group known for their unique hip-hop and pop music and for their exceptional sense of style. They have garnered a large fan base in the Philippines since their debut in 2006, but it is their first time to hold a concert in the country. Hundreds of VIPs flocked to the MOA Arena on Oct. 24 to show their support for their idols.

Upon being seated in the arena, fans began chanting the names of the members and screaming as their favorites were shown on the screens, where Big Bang’s music videos were being played. These screams doubled in volume as the opening video of the concert began to play and the big cloth covering the stage dropped, revealing the five members in separate capsules, all clutching air masks and singing their album’s intro song, “Alive.”

The group launched into several songs, beginning with their 2011 comeback hit “Tonight.” Big Bang’s dynamic start pumped up the energy of the audience and immediately enraptured the crowd. The sea of yellow—the yellow color emanating from Big Bang’s official crown-shaped light sticks—swayed to the rhythm of the music and sang all of Big Bang’s songs, despite the language barrier.

Communicating with the audience

In between songs, the members of Big Bang took the time to communicate with their audience, speaking to them in English despite their difficulty with the language. The group was quick to compliment the Philippines, commending the beauty of the country and praising the crowd for singing the chorus of “Day by Day,” one of their older hit singles, well.

What made this concert stand out among the other Alive concerts was the presence of a special guest in the audience, Sandara Park. Sandara, who was formerly a member of Star Magic in the Philippines, moved to Korea in 2007 and joined the girl group 2NE1 under YG Entertainment, the same entertainment company as Big Bang’s. The boys also playfully talked about how Sandara toured them around the Philippines, with Seungri even saying, “Sinigang is sarap! Dara gave it!”

In addition to this, the boys weren’t afraid to show their playful side to the audience, especially during the encore, which was the longest among all of the Alive concerts so far. Seungri walked around onstage, filming the other members’ crazy antics. This included TOP drowning Daesung with an entire bottle of water, Taeyang and G-Dragon dancing around onstage, and himself playing with a toy panda and blow-up crayons.

The whole time, the group never stopped interacting with the crowd, including them in their water battle by showering them with water and by throwing their jackets to some members of the audience.

The show ended with the members of Big Bang each giving a personal message to the audience and thanking them for coming. G-Dragon interacted with the audience by trying to speak in Filipino, saying “Paalam! Salamat! Gandang gab-i! Mahal ko kayo!” with a slight Korean accent. The members then walked off the stage one by one, but not before Taeyang grabbed TOP and asked him to dance one last time for the crowd. TOP’s brief dancing act was the icing on the cake, as Big Bang fans know that TOP normally doesn’t dance.

The entire event was a treat for fans in the Philippines, and it was well worth the six-year wait. Each member of the audience left the arena feeling much closer to Big Bang and without a doubt, Big Bang’s Alive Concert Tour in Manila is sure to remain a special night in everyone’s hearts forever.