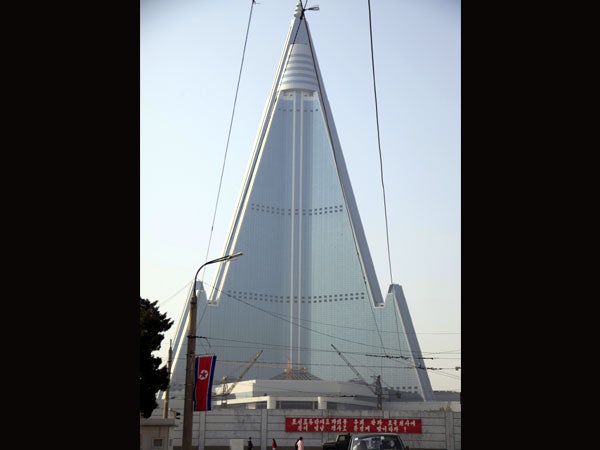 In this April 9, 2012 file photo, a new banner which calls on Worker Party delegates to lead the country to a better future is seen near the semi-completed 105-story Ryugyong Hotel in Pyongyang, North Korea. International hotel operator Kempinski AG said Thursday, Nov. 1, 2012 it will manage the pyramid-shaped hotel that is expected to open next year with shops, offices, ball rooms and restaurants and 150 rooms. AP

SEOUL — An enormous pyramid-shaped hotel which has stood half-built for decades in North Korea’s capital is on track to open its doors next year, a luxury international hotel chain said according to reports Friday.

Pyongyang’s 105-story Ryugyong Hotel, a monolithic concrete shell dubbed the “Hotel of Doom” by international media, has been repeatedly delayed and stands as a symbol of the economic problems plaguing the impoverished country.

Despite doubts that it would ever be completed, the head of Geneva-based hotel group Kempinski AG has said it plans a partial launch next year, South Korean media said.

Seoul’s Korea JoongAng Daily quoted Kempinski chief executive Reto Wittwer as saying the group would open the hotel in July or August 2013, offering 150 rooms on the top floors of the building.

“It will become a multipurpose complex, with the three lowest floors used for the lobby, restaurants and a shopping centre, and the rest of the upper floors will be mostly used for offices,” he said.

South Korean daily Chosun Ilbo also quoted Wittwer as saying the Kempinski group planned to open the hotel in the first half of next year.

Former North Korean leader Kim Jong-Il, who died last December, reportedly ordered construction of the hotel in 1987, with skills and capital from a French company.

In 2008 the project was named the ‘Worst Building in the History of Mankind’ by US men’s lifestyle magazine Esquire.

Wittwer said that Cairo-based Orascom Telecom, which launched a mobile network in North Korea in 2008, has invested $180 million in the building’s exterior, which has now been completed.

Orascom is now working on the interior, he added.

In September this year, Beijing-based company Koryo Tours, which organizes trips to North Korea, was granted a rare glimpse inside the hotel.

Photos taken by the company and provided to Agence France-Presse show a vast glass-covered lobby and atrium with tiers of bare concrete at its base, resembling a multi-storey car park.

The visit also revealed that the building features a ninety-fifth-floor viewing platform and plans for a banqueting hall.