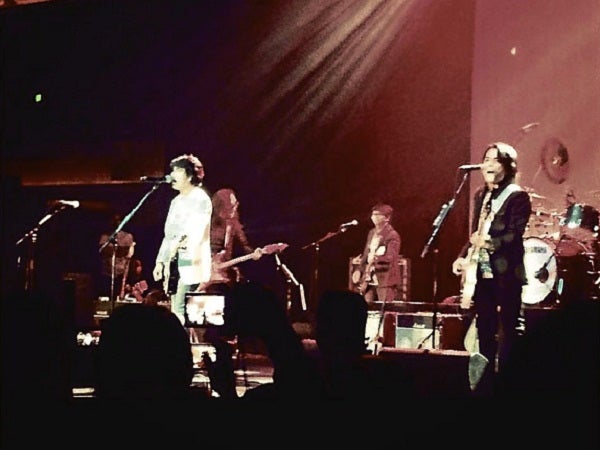 Once again, we were young and carefree

I was 15 years old when I moved from the Philippines to the US.

I was already an Eraserheads fan back then. I grew up watching them on TV, hearing them on the radio and listening to their cassette tapes.

Everyone could relate to their music—their lyrics stirred our emotions. They were sharp, fun, somewhat cynical and, most importantly, real. Sadly, I never got the chance to see them perform live in the Philippines.

Fast forward 17 years later. On the eve of my 32nd birthday, I found myself lining up outside Hollywood Palladium with my friends for the Los Angeles stop of the Eraserheads’ North American Tour. We were very ready and so excited to relive our childhood memories. We didn’t mind standing in the long line for three hours. No fuss, no drama—everyone was simply elated to get their rock on.

When we were finally inside the venue, the countdown began on the big screen on stage. It didn’t matter where we were, we were five minutes away from hearing Ely, Raimund, Marcus and Buddy play together again.

When they finally came out, it was nothing short of amazing. Seeing them together again and performing live was surreal. Song after song, the crowd never tired of chanting their names, screaming out the lyrics, bouncing up and down and documenting the experience with their smart phones. For almost two-and-a-half hours, we were transported to true OPM rock blissville. Once again, we were young and carefree, all worries and problems nonexistent.

Seeing them finish singing the last song “Alapaap” during the encore was a bittersweet moment. Reality was slowly creeping back. Driving away from this once-in-a-lifetime event, we were happy, content and nostalgic about this band that helped shape our lives one way or another.

I will never stop hoping that someday they would reunite permanently and give us something that would take us back to the days of wishing wells and magic spells once again.  Angela Aveo Noriega, Contributor, Philippine Daily Inquirer

Truth be told, I felt like a poser. There I stood in the chilly autumn evening air, VIP ticket in hand, outside the Jersey City Armory, an imposing red brick building in a nondescript part of town. Just a few hours earlier, I flew in from my home in Atlanta, Georgia, just to watch the show. My friends remarked, “Ginawa mong parang Cubao lang ang New Jersey para manood ng concert.” (You made a trip to New Jersey seem like you were just going to Cubao to watch a concert.)

While waiting in line to enter the venue, filmmaker and friend of the band Quark Henares stopped by our group for a spot interview. He asked who the biggest fan among us was. My friends all pointed to me.

What was my Eraserheads favorite song and what was my fondest memory of the band, he wanted to know. The song was easy. I went with the poignantly popular “With a Smile.” But I had no fondest memory to speak of, since this was my first time to watch an Eraserheads gig ever. I followed their music on the radio but never got around to getting a cassette tape or CD of my own. I have always been a Side A kind of girl (don’t judge). But while I may not have an arsenal of anecdotes or recollections about the band, I had my reasons why, despite not being a rabid worshipper of the music churned out by Ely, Raimund, Buddy, and Marcus, I was there that evening.

Because I am of the generation that grew up and went through that turbulent and bittersweet phase of transitioning from high school to college to young adulthood, with their songs blasting from the jeepney and FX’s speakers in the background.

Because I am from the University of the Philippines (fine, UP Manila and not Diliman, but hey, it’s still UP, so cut me some slack) and I feel a responsibility, no, a duty to see my schoolmates, who made the Kalayaan Freshman Dormitory a hip joint on campus, perform. Because I missed seeing the 2008 Reunion Concert and the Final Set in 2009, and I was not about to pass up on the chance to see what is arguably one of the Philippines’ most iconic band back together again. I just had to.

So I did. I sang, danced, jumped around, and reminisced. By the end of the night, I didn’t feel like a poser anymore. At 35 years old and halfway across the world from where I first heard them, I became a fan of the Eraserheads.

The show started almost two hours late and the crowd was getting restless. At around 8:45 pm, the band came up and started to stoke the fire to the chords to “Walang Nagbago.”

The set began on shaky ground, with Ely’s mic down for the first two minutes. When his voice finally came through, the falsetto part of the song sounded feeble and tentative. But the crowd held on and gave Ely and the guys the chance to get their bearings. By the time they played “Pare Ko,” they were in business. Through the next 25 songs, the band transported the audience through space and time back to whenever and wherever it was that they first enjoyed the music of their youth.

Head-bobbing and bouncing around to the likes of “Kama Supra” and “Torpedo” and partaking in communal singing of anthems like “Fruitcake,” “Ang Huling El Bimbo” and “Toyang,” the crowd was no longer standing in a gym in Jersey City. They were back in Club Dredd, Mayric’s or their school’s fairgrounds. They were pining about their “Ligaya” and pleading “Huwag Mo Nang Itanong.”

As Ely introduced the band and Raymund introduced Ely, the audience howled with appreciation and adoration for what seemed like long-lost friends. Friends with an irreverent sense of humor and devil-may-care attitude, blurting things like “Wala pa kaming tulog so pasensyahan na lang” (We haven’t slept so just deal with it) and “Di naman kayo nag-More kaya bumalik na lang kami” (You didn’t shout “More” so we just came back out) after returning to the stage for the encore.

Friends who sang truthfully and eloquently about the highs and lows of one’s young life. Friends who drifted apart just like many of us are wont to do as we go through life.

As the last strains of “Alapaap” faded and the cheers died down, the crowd poured out into the cold, dimly lit streets of a land not their own. As they walked away, they were warmed by the fire reignited that night by four guys who came together once more, bringing the sounds of home and youth to them. Tessa Mendoza Cruz, Contributor, Philippine Daily Inquirer