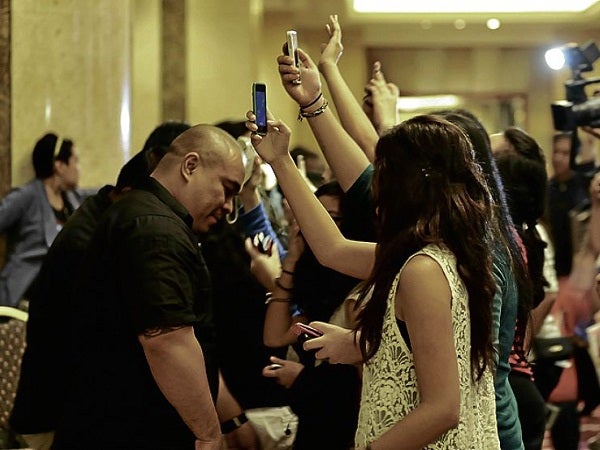 ‘I never thought they would come here’

“I never thought they would come here,” said Niki Jalandoni, a 15-year-old who says she’s been watching the show “Keeping Up With The Kardashians” since season one.

She’s not the only one. Mariel Litan is a fan of the show, too. “Seeing them is like a dream come true. My old Twitter account was even @karielkardash because I would pretend to be their sister.”

The girls were standing outside Shangri-La’s Makati B ballroom, while Rob Kardashian and Kylie Jenner were inside for a series of one-on-one interviews about their Human endorsement. Even the slightest sign of the door opening sent the girls into a frenzy, tiptoeing to see the siblings, holding up cameras, waving and shouting their names in hopes of getting their attention.

“Kylie is so pretty. Oh my god, I’m gonna cry,” said Dane Mateo, 14. She said she follows Kylie on Tumblr, Twitter and Instagram.

Michi Tañada, 13, said, “Kylie is an inspiration and a role model.”

“She’s such a good sport when it comes to Kendall’s fame. She’s so lovable,” said Aimee Tamayo, 14.

Kylie wasn’t the only one who got a lot of love. Bea Cruz, 14, said, “I’m here for Robert, I love him so much. He’s so hot. He’s a really awesome older brother to Kylie and Kendall. He’s a good person, I love that about him.”

As Kylie and Rob prepared for the press conference, the girls stayed outside, patiently waiting, huddling in a tight group. “Have you guys been friends for a long time?” we asked.

“No, we just met now,” was the quick answer.

“They build bridges,” another girl added.