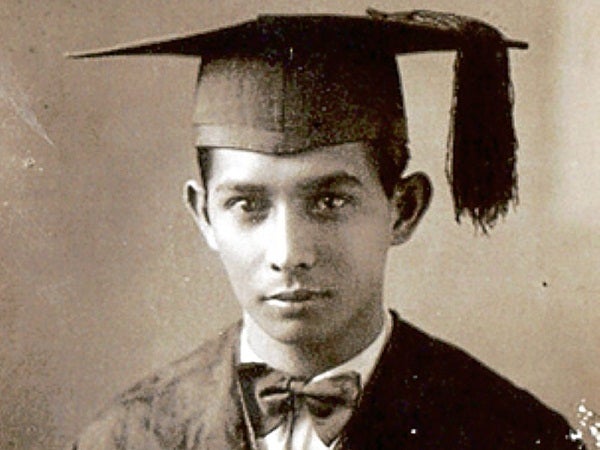 I dug up the bones of my father, Godofredo “Tatay Godong” Ordoñez, in 1998. Tatay Godong died in 1937, when I was still an infant, barely a year old. After 60 years, his grave was in a sorry, decrepit state and I decided to transfer his remains to a newly built mausoleum where my mother was buried.

Tatay Godong died when he was only 31 years old. When I was a little boy, my mother always showed me my father’s picture, and I’ve grown accustomed to his face forever.

My father was handsome in a finely chiseled way, with neat and lush eyebrows, dark, sincere eyes, a high nose, and well-defined lips. His ears were somewhat large and spread, hair neatly combed, parted on the left side and shiny with pomade. Part of my father’s appeal was a shy expression, a sign of politeness and good breeding common in good families in Laguna during the prewar days.

When I was growing up, my mother never failed to introduce me to friends of my late father. I’d always hear them say that my father was genuinely a lalaking disente. Kung kumilos, pulido.

When I was 10, my mother gave me a shoe box full of my father’s love letters to her. She told me to read them. And from those letters, I learned how patiently my father courted Inay. His gentle yet persistent thoughtfulness and affection were the best reasons for winning Inay’s love.

Tatay Godong was buried near the ancient cemetery gate. The sepulturero didn’t have a hard time cracking the worn-out grave for it had been battered by storms and rains for 60 years. When the rubble cleared, inside were the bones of a man probably 5 feet 5 inches tall, crumbling in little brittle pieces mixed with earth. But the skull and a piece of jaw with teeth were still intact. We scooped everything and arranged them neatly on a plastic sheet. He was my father all right. I knew the shape and size of the forehead from his photograph.

Suddenly, I felt an urge to hug that skull, for all the years of his absence, for all the times when I felt I needed a father and there was none around to take to PTA meetings and I came alone, wandering in the gathering, feeling out of place, envious of the other boys who came with their fathers.

For the first time in my life, I touched my father. I touched his skull tenderly, wiping away with care the dusty earth, letting my fingers glide over his forehead several times, gently. Unconsciously, I uttered the word: Itay! I felt a vivid warmth in touching a piece of his rib, a piece of his hip bone, a piece of his shoulder bone. I felt my father was actually present, loving my touch and extremely grateful that I was there holding him for the first time.

Among the bones, I found a small medal of the Blessed Virgin Mary and another medallion commemorating the Eucharistic Congress in the ’30s. My mother must have pinned them to his clothes. Inay Aurea made sure Tatay Godong went to confession on his deathbed.

I felt sorry for my father. He missed a lot of things—my grade school and high school graduations, my winning a Palanca Award for short story in 1961, my wedding in 1967 (and another in 1991) and giving him his apo, or my receiving the 1995 Lifetime Achievement Award given by the Creative Guild of the Philippines.

I’ve spent more than 45 years in advertising, a profession that’s extremely enjoyable because our product was creativity in sales communications. To create fantastic advertising, I used the “think Filipino, feel Filipino and talk Filipino” strategy. It always worked like a charm.

In 1979, “Lalaking Disente” was the catchphrase of a TV commercial we did for Three Flowers pomade for men. At that time it was a dying brand, because long and uncombed hair became the fad. The TV commercial had a typical syrupy theme song, which went this way:

Eva Eugenio, jukebox queen of the ’70s, sang it in her alluring, sultry style, dedicating it to all masa men and adult probinsyano who were not affected by hair fads. “Lalaking Disente” was a big hit, and Three Flowers pomade enjoyed a surge in sales. The brand was saved from being thrown to the morgue.

My inspiration for the idea for “Lalaking Disente” in selling pomade came from the memory and images of Tatay Godong I’ve kept in my mind. He fit the idea of lalaking disente, a concept rich with meaning in the cultural milieu of an idealized male in hometown societies during the prewar period (circa 1910-1940).

Although long dead, my father was a big help in creating advertising with a Filipino soul.

Every All Soul’s Day, it has been my duty to light a candle at my father’s grave. Inay Aurea taught me to do that when I was a three-year-old boy.

As the candles burn bright through the night, I can feel the togetherness of the living and the dead. I become fully aware of my immortality. I know my soul has a place in Heaven, where all people who died in the grace and friendship with Jesus Christ dwell in the full enjoyment of what St. Thomas Aquinas calls “beatific vision.”

Up there, I’m sure there’s a lalaking disente in the midst of God, His angels and His saints.