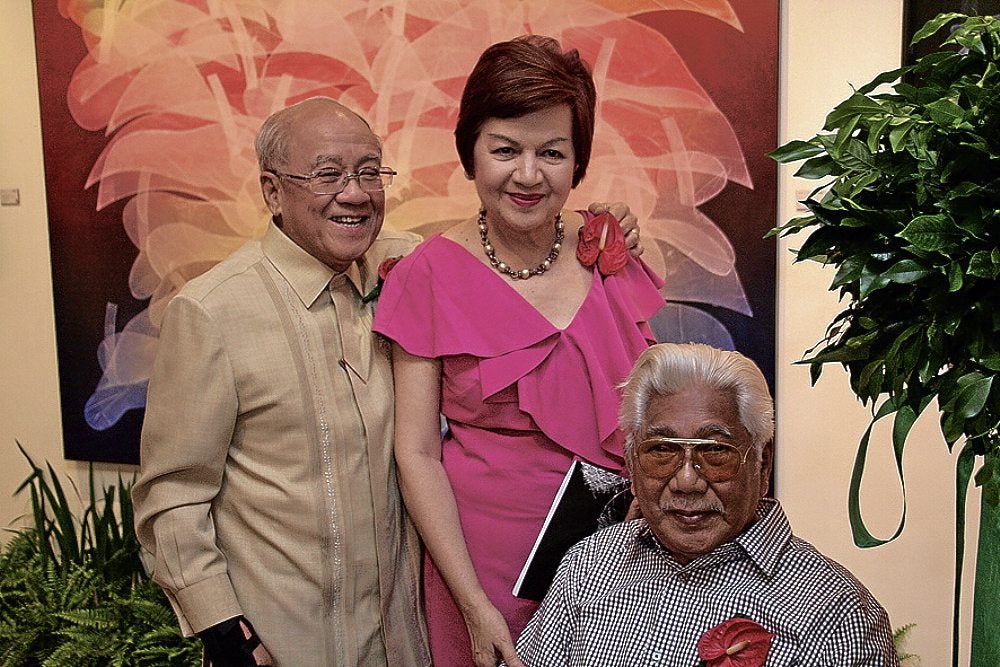 Great painters were enamored with flowers, which they depicted with ardor and affection and in a multiplicity of variations.

Van Gogh is practically associated with sunflowers although he painted several irises, too.

Claude Monet’s obsession with flowers can be seen in his gardens in Giverny, located  just outside of Paris, where he resided with his family. In Monet’s garden are to be found dahlias, geraniums, roses and gladioli, which all appeared in profusion in his floral still lifes.

Monet lamented his “poor palettes” which could not capture the full chromatic radiance of the real flowers. He is, of course, most famous for his painting of water lilies, which he also grew in his garden pond.

Henri Matisse, the Fauvist artist, always included flowers in his paintings. He said: “There are always flowers for those who want to see them.”

Filipino artists are, of course, not immune to the seduction of flowers. Whether as still lifes or as decorative elements in domestic interiors, flowers bloom on the brilliantly painted canvases of representational or figurative artists.

To be sure, flowers are the last thing one would find in the works of abstract artists. How then did an abstractionist maestro such as Romulo Olazo fall in love with the subject of flowers?

At one time, Olazo, having arrived from a Saturday Group painting session at the Flower Farm in Tagaytay, brought to his wife Patricia an armful of flowers. In this case, not hyacinths but anthuriums.

As it turned out for the Olazo couple, more anthuriums arrived at their residence a few days later, compliments of the Flower Farm. It was as if the Flower Farm had intuited Olazo’s attraction to anthuriums, thereby accidentally, if indirectly, paving the way for another theme in the art of Olazo.

Previously, Olazo, had painted a series of works on the subject of kasuy (cashew). Essentially an abstract artist, Olazo had made a name for himself with his long-running “Diaphanous” series.

It is an art of luminosity, achieved through the application of several layers of geometric “stenciled” shapes. While the “kasuy” paintings were a departure from his abstraction, Olazo nonetheless treated the shape with his signature “diaphanous” technique.

So, too, with the “Anthurium” paintings. At first, the subject was executed realistically as a floral still life. Soon the anthuriums were rendered as a “Diaphanous,” flattened but still retaining its distinctly recognizable heart shape.

Was it by serendipity that Olazo chanced upon the shape—the heart—that enticed and thrilled him? Dispensing with the geometrical shapes of circle, square, and triangle, the most vividly recognizable shape is that of the heart.

It is the most evocatively emotional shape with the singular power to suggest, evoke and symbolize the universal emotion of love. (Indeed,  the heart shape has become the graphic emblem of the greatest city in the world, New York. Paris, on the other hand, has to content itself with the label City of Love.)

The assigned color for the anthurium is, of course, blood-red, for that fluid of life coursing through the veins. Olazo’s aesthetic, however, disregards  this chromatic convention. The artist animates the shapes with a variety of colors, such as pink, turquoise, leafy green.

In the instance of the present suite of works, the artist opted to use white. The base or background colors, such as tan, sienna, sky-blue, mossy green, are not a passive field but involved in intensifying the contours of the anthurium form.

In all the works, the spikes are unfailingly defined in seething red and deployed by the artist as an activating agent. Like a spangle of accents, the spikes, which, in fact, differentiate the anthurium from other flowering plants, teasingly swim into view, seemingly dispersed at random, but in an order that cumulatively inflects the stun of heart shapes.

Altogether, this recent collection of anthurium paintings derives from the compositional format enforced in the “Kasuy” series. Based on an internal radiation of light that emanates from the first layer of anthurium “screen,” each painting then is an expressive nuance, in organic form, of the classic “Diaphanous” paintings.

The conflation of a representational theme and a deeply entrenched and perfected abstract style is what lends a refreshing thrill to Olazo’s continually evolving art. It is worth recalling that way back in the ’70s Olazo did some graphic works that used the image of the heart. Appropriately he gave them the evocative title “Corazon.”

As with the kasuy, Olazo realized the potency of the anthurium as pure form. Its providential heart shape is itself a valentine that was proffered to him on that Saturday Group painting session at the Flower Farm.

When the artist brought home an armful of anthurium and presented them to his wife Patricia, the correspondence between love and art acquired a dimension that needed a manifest expression.

These anthurium paintings are the progeny of that felicitous moment.