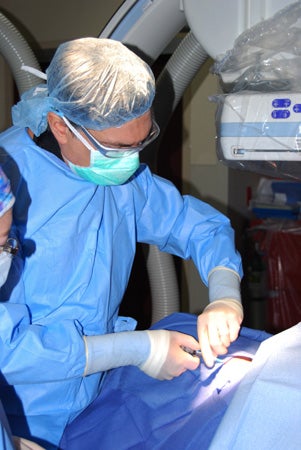 In this Wednesday, Oct. 31, 2012 photo provided by the University of Miami, Dr. Joshua M. Hare, director of the Interdisciplinary Stem Cell Institute, performs a heart biopsy, a preliminary step in one of several cardiac stem cell trials at the University of Miami Miller School of Medicine. Researchers are reporting key advances using stem cells to fix weakened, damaged hearts. In one study, bone marrow cells donated by unrelated strangers helped repair hearts, suggesting that cells could be banked for off-the-shelf use in patients after heart attacks the way blood is banked now. AP FILE PHOTO

LOS ANGELES – Researchers are reporting a key advance in using stem cells to repair hearts damaged by heart attacks. In a study, stem cells donated by strangers proved as safe and effective as patients’ own cells for helping restore heart tissue.

The work involved just 30 patients in Miami and Balitmore, but proves the concept that anyone’s cells can be used to treat such cases. Doctors are excited because this suggests that stem cells could be banked for off-the-shelf use after heart attacks, just as blood is kept on hand now.

Results were discussed Monday at an American Heart Association conference in California and published in the Journal of the American Medical Association.

The study used a specific type of stem cells from bone marrow that researchers believed would not be rejected by recipients. Unlike other cells, these lack a key feature on their surface that makes the immune system see them as foreign tissue and attacks them, explained the study’s leader, Dr. Joshua Hare of the University of Miami.

The patients in the study had suffered heart attacks years earlier, some as long as 30 years ago.

All had developed heart failure because the scar tissue from the heart attack had weakened their hearts so much that they grew large and flabby, unable to pump blood effectively.

Researchers advertised for people to supply marrow. The cells were removed from the marrow using a needle into the hip and then amplified for about a month in a lab at Baltimore’s Johns Hopkins University, then returned to Miami to be used for treatment, which did not involve surgery.

The cells were delivered through a tube pushed through a groin artery into the heart near the scarred area. Fifteen patients were given cells from their own marrow and 15 others, cells from strangers.

About a year later, scar tissue had been reduced by about one-third. Both groups had improvements in how far they could walk and in quality of life. There was no significant difference in one measure of how well their hearts were able to pump blood, but doctors hope these patients will continue to improve over time, or that refinements in treatment will lead to better results.

The big attraction is being able to use cells supplied by others, with no blood or tissue matching needed.

“You could have the cells ready to go in the blood bank so when the patient comes in for a therapy — there’s no delay,” Hare said. “It’s also cheaper to make the donor cells,” and a single marrow donor can supply enough cells to treat as many as 10 people.

Dr. Elliott Antman of Harvard-affiliated Brigham and Women’s Hospital in Boston who heads the heart conference, praised the work.

“That opens up an entire new avenue for stem cell therapy, like a sophisticated version of a blood bank,” he said. There’s an advantage in not having to create a cell therapy for each patient, and it could spare them the pain and wait of having their own marrow harvested, he said.

The study was sponsored by the National Institutes of Health. Hare owns stock in a biotech company working on a treatment using a mixture of cells.

Juan Lopez received his own cells in the study, and said it improved his symptoms so much that at age 70, he was able to return to his job as an engineer and sales manager for a roofing manufacturer and ride an exercise bike.

“It has been a life-changing experience,” said Lopez, who lives in Miami. “I can feel day by day, week by week, month by month, my improvement. I don’t have any shortness of breath and my energy level is way up there. I don’t have any fluid in my lungs.”

And, he said happily, “my sex drive has improved!”