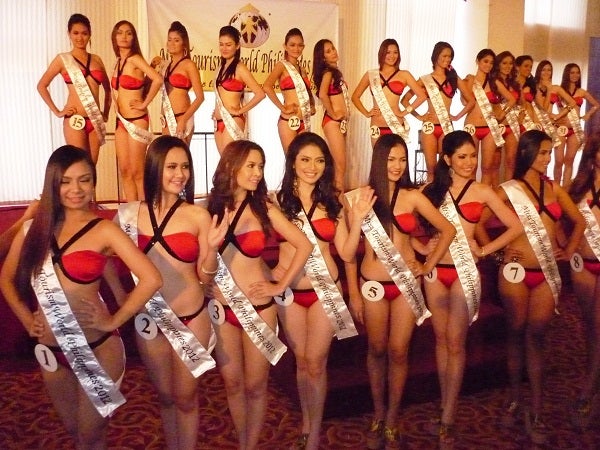 Contestants of the the 2012 Miss Tourism World Philippines pageant. PHOTO BY ARMIN ADINA

One more beauty pageant for tourism

MANILA, Philippines—Another national beauty competition is set to conquer the Philippine pageant scene, hoping to promote tourism and send the message to the world that the Philippines is a safe and wonderful place to visit.

But if the Philippine franchise had a changing of the guards, the global pageant’s organization also transferred bases. The London-based Tourism World Organization bought the international pageant from previous owner John Singh of Singapore in 2008.

For the national search’s maiden edition, 30 aspirants from all over the country were selected.

Among the more interesting hopefuls is Joy Marie Gangan from Ilagan City. The 5-foot-8 farm worker hopes to emulate her idol Venus Raj’s pageant career and eventually rise from the corn fields and give honor to the country in an international stage.

Gabrielle Cabrera, meanwhile, hopes to continue her family’s legacy of championing Philippine pride through pageants. Her elder sister Gionna Cabrera made waves in the 2005 Miss Universe pageant in Thailand where she bagged several recognitions including the Miss Photogenic award.

Other notable contenders are Margaret May Llavor, who has a striking resemblance to Filipino top model and former Miss Global Beauty winner JP Abinuman; and Stephanie Winski, one of the youngest contestants at age 18.

The winner will be sent to the 2012 Miss Tourism World pageant in Thailand on December 15.

The 2012 Miss Tourism World Philippines coronation night will take place at the AFP Theater in Camp Aguinaldo, Quezon City, on November 11. GMA News TV will air the ceremonies on November 24 at 9 p.m.