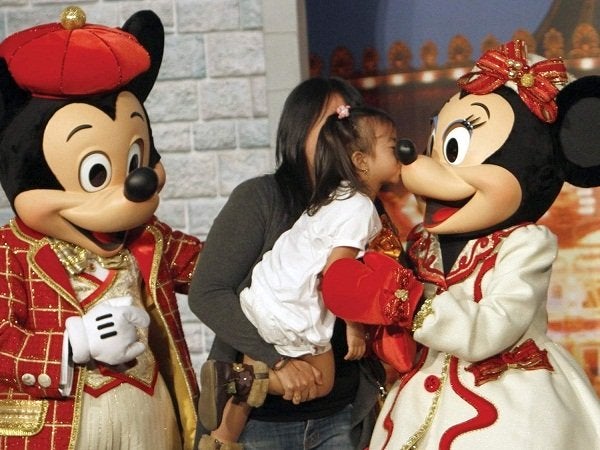 Disney’s favorite characters Mickey and Minnie Mouse treat kids to a meet-and-greet during the opening of the “Mega Magical Christmas with Hong Kong Disneyland” at SM Megamall, which runs until Nov. 11. Minnie gets a kiss from a kid as Mickey looks on. RAFFY LERMA

MANILA, Philippines—For parents running out of ideas on where to bring the kids during the weekend, here’s another reason to drop by SM Megamall for some holiday cheer straight out of Hong Kong Disneyland.

From November 9 to 11, the popular shopping destination will be filled with exclusive performances, interactive activities and will even feature Hong Kong Disneyland vacation packages as part of its Mega Magical Christmas.

Hong Kong Disneyland Resort managing director Andrew Kam was present during Friday’s launch of what would be a three-day event and said that the Philippines was one of their top three international markets, which is why they have brought the Disney experience much closer to Filipinos.

Kam said this was the very first time they have embarked on such an event in the Philippines, an event “exclusively developed” by Disney for the country.

During this weekend the mall will boast not only of its usual holiday decor but will also house a snowy castle at the middle of its Event Center—the perfect setting to watch Mickey Mouse and Minnie Mouse perform “Snow Time”, the latest in the duo’s entertainment shows.

A behemoth Christmas tree, exactly 30 feet tall, has meanwhile been placed at the Mega Magical Christmas Kids Zone at the Mega Atrium—festooned with Mickey and Minnie plush toys.

Toy Story fanatics will also be thrilled upon seeing the Toy Story Land-themed photo corner at the upper ground floor of Building B which will quench families’ thirst for holiday snapshots until January 6.

The event seeks roll into one experience “all things that make Christmas merry: music, laughter, indulgence, gift giving and the spirit of sharing,” said Annie Garcia, president of SM Supermalls.

“We’re thrilled to host Hong Kong Disneyland in their first foray to the Philippines. It represents joy, wonder, inspiration and magic,” she said.

First to get the spectacular Hong Kong Disneyland experience were 50 children from the Nayon ng Kabataan Center in Mandaluyong City who got to meet and greet Mickey Mouse and Minnie Mouse during the launch.

Mickey Mouse and Minnie Mouse appeared for the children dressed in their Christmas finery, followed by the premiere of “Snow Time”.

Kam said that Christmas was meant to be most enjoyable for children, which was why they would donate 800 Mickey Mouse and Minnie Mouse plush toys to a number of centers under the Department of Social Welfare and Development. With this, he expressed hopes that Hong Kong Disneyland will also be able to “extend the joy and happiness across the communities in need in the Philippines.”

Aside from immersing children in exciting activities, the three-day event will also feature exclusive vacation packages through eight travel agencies. They offer free upgrades to the Hong Kong Disneyland 2-Day Ticket as well as the Magic 2-in-1 Coupons and premium gifts.

From November 15 this year to January 1 in 2013, Disney’s Sparkling Christmas will have two added theme lands: Grizzly Gulch and Toy Story Land. Kam said nearly 100 percent of their Filipino guests “intend to visit the park again after Toy Story Land is opened.”

“We are sure guests will enjoy the one-of-a-kind Wild West experience in Grizzly Gulch and the Christmas festivities of Disney’s Sparkling Christmas,” he said.

Tour packages purchased with Visa cards will also entitle guests to join a contest for an upgraded hotel and tour experience. This promo runs from November 9 to 11 at SM Megamall’s Event Center and will continue from November 12 to 18 at the participating travel agents’ sales booths.