How Majayjay’s ‘Buttocks Bridge’ came to be | Lifestyle.INQ ❮ ❯ 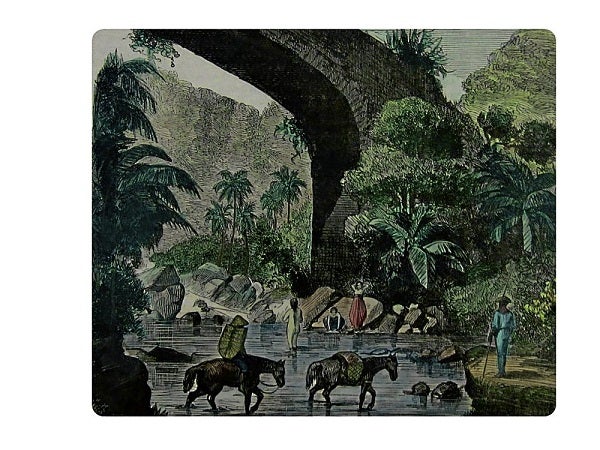 How Majayjay’s ‘Buttocks Bridge’ came to be

The thing is an ancient ruin of a weird, huge arch. It stands forlorn at the base of a steep ravine walled in by a thick jungle and the Olya River in Majayjay. It’s a tall arch, moss-covered, with wild ferns and creeping vines growing in its cracks and crevices. Below is a dark green lagoon where we swam and frolicked naked when we were young boys many moons ago.

Villagers made a makeshift bamboo footbridge attached to the abandoned arch. It is used as a shortcut by village people going on foot to the town of Majayjay.

Old folks say the construction of the arch stopped abruptly in 1852. It was part of a three-arch bridge that would have shortened the route to Majayjay.

Tales of political and clerical intrigues spun wildly, involving civil engineers under Governor General Urbiztondo and the hierarchy of the Franciscan religious order in Intramuros.

The dual rule of the Spanish colonial government of civil administration and Christian evangelization of the archipelago sometimes overlapped, resulting in the confusion of accountability as exemplified by the scandalous and aborted bridge in Majayjay.

At the center of the controversy was Fray Victorino del Moral, cura paroco of Majayjay, who supervised the construction of the bridge in the early part of 1852. Fray Del Moral, a Franciscan priest, was a strong presence in town. Young, energetic, outspoken and a disciplinarian, he was an old-world missionary evangelizer whose gospel oratory and administrative skill played important roles in the progress of his parish and the whole community.

The Franciscan order, to which Fray Del Moral belonged, was the second biggest group of friars who arrived in 1578. They took over the evangelization of the towns around Manila and Laguna de Bay all the way to south Luzon, including the Bicol region.

The Franciscans built many beautiful churches, bridges, roads and dams. Many are still existing, such as the churches of Majayjay, Paete, Pakil, Lucban and Tayabas. In the Bicol region, they built Naga Cathedral and many others in Sorsogon. They also established charitable houses and hospitals such as San Juan de Dios and San Lazaro hospitals.

The aborted bridge that Fray Del Moral supervised in the ravines of the Olya River acquired two descriptive tags, which became famous. To my ancestors and the people of Majayjay, the bridge was called “Tulay ng Pigi” (buttocks bridge), to honor our ancestors who worked on the bridge—and got whacked on their buttocks. Latecomers for the job were given a dozen whacks with a paddle. There’s a strong suspicion that the work stoppage was a boycott, in protest against the physical punishment endured by laborers who reported late for work.

Government representatives sent by Governor General Urbiztondo filed a report which devastated the pride and honor of Fray Del Moral. The report cited ignorance of scientific studies and engineering principles in the construction. The report strongly recommended the demolition of the bridge and construction of a new one based on proper project studies with engineering and architectural planning.

As an insult to Fray Del Moral, the report further said the bridge building should not have been placed under the management of persons who do not have the engineering know-how and scientific knowledge. The Manila authorities gave the bridge a mocking title: Puente del Capricho, “bridge of whim.”

Puente del Capricho became such a buzzword in the social circles in Manila. In the early chapters of José Rizal’s novel, “El Filibusterismo,” the bridge was derisively mentioned by Fray Camorra to journalist Ben Zayb while traveling on a boat on Laguna de Bay.

The subject became more topical because modern bridge engineering was the biggest sensation in Manila. In 1852, the Puente Colgante (a hanging bridge like San Francisco’s Golden Gate Bridge), crossing the Pasig River, was finished and inaugurated.

The lone defender of Fray Del Moral was his friend Don José Ramirez Dampierre, alcalde mayor of Bulacan, who, in 1853, wrote a letter to the gobernadorcillo expressing his confidence on the durability of the arch. He recommended the completion of the bridge by constructing the two other planned arches.

By that time, however, Fray Del Moral was a changed man. The energy, passion and enthusiasm of the young cura paroco had been diminished. He became quiet, reticent, and focused only on his priestly duties, such as saying Masses and administering the sacraments.

He wrote a letter to Don José Ramirez filled with gratitude and highly emotional apologies. To the point of extreme humility, he accepted all the mockeries and insults heaped upon his bridge by the bureaucrats from Intramuros.

He mentioned other causes of sorrows during his tenure in Majayjay: the separation of Luisiana to become an independent township, and the poor implementation of the government ordinance on the inhabitants’ name change from ethnic to Christian names.

Fray Del Moral, however, reassured his friend Don José Ramirez that despite his travails and hurt feelings, he remained a religious and a parish priest in character, whose existence was meant for peace, never to act in the heat of passion.

In 1854, Fray Victorino del Moral was transferred to Lucban, where he died at a young age. The bridge he left unfinished still exists in the jungles of Majayjay, where it will always be called by us natives as Tulay ng Pigi.