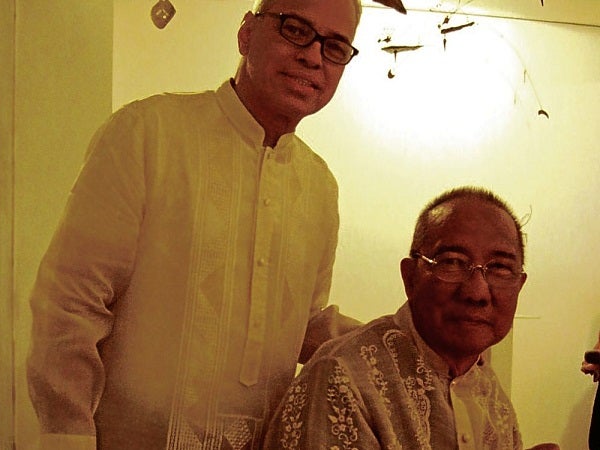 In 2008, we interviewed sculptor Jerry Araos in his campus house at the University of the Philippines for a term paper requirement. Already in his 60s, he still brimmed with his distinctive brio and bluster, traits that turned on or turned off those who’ve encountered him. He has always drawn out that sort of reaction from others—love him or hate him. Not that he cares.

This was before a stroke set him back physically. He eventually recovered from that to mount solo shows, but three years later, he survived a bad fall just as the building of his more permanent home in Antipolo was about to end.

Again the many weeks in the hospital and the rehabilitation kept him away from his shop and tool shed. The years and the diabetes may have taken their toll on the heart and kidneys of this lion in his winter, but at 68, Araos is not about to go down without a roar.

In the ’08 interview, I asked him what he could advice aspiring visual artists on how they could navigate the vicious art scene, especially in Metro Manila.

His answer was forthright—“The art scene is an arena of war composed of many battles. To win it you must win more battles than your competitors. The most important battle is the battle for space. For beginning practitioners, my advice is for them to promote alternative spaces into viable art venues. If they succeed in this endeavor, they likewise promote themselves into viable exhibitors. Then galleries would take notice of them. There is a shortcut to what seems to be success. This is by making a monkey out of yourself. Many galleries develop their own monkeys and include them in their stables.

“When gallery owners talk to each other, they refer to these art practitioners as monkeys. Galleries do not disrespect the rights of other galleries over their stables of monkeys. Unggoy ko ’yan, unggoy mo ’yan (That’s my monkey, that’s your monkey).”

He continued, “What is a monkey? A monkey is a practitioner who is recruited by a gallery owner to paint or sculpt like a well-known artist, but a monkey signs his name. This is tantamount to art imitation, a gray area in artistic legalese. There are many successful monkeys in the art scene. Many would like to rid themselves of their ‘monkeyness.’ Very few have succeeded. Monkeys may make their mark and money in their own time. But art history will never forgive them.”

He made toys, playful chairs and torsos. He is testing gallery rules by exhibiting three torsos, which he began in ’08 but set aside as he recovered and pondered their execution, in the back room instead of out front. These pieces are his homage to the gay community.

He believes that a bakla (gay man) behaves the way he does because he has woman for his epitome. Another torso takes off from the term babaeng bakla exemplified by anorexic fashion models who speak and act like gay males in an exaggerated way.

The macho in Araos is aware that he is treading on a delicate subject yet is confident that he has done this dynamic community justice, many of whom are cultural workers like him.

He said of his playfully executed “Tuntungan” and see-saw called “Tutumbaba,” “Creating a useful object takes a degree of artistry. Turning a useful object into something useless takes insanity, and this is said to be art. This argument in favor of fine arts or of functionalism in art harks back to the late ’80s when the concept of sining-gamit came about. Art that is just standing for itself is idle.”

He admitted age and illness have weakened his strokes. What used to take just three strokes of chisel and mallet to achieve an effect on old wood now requires of him 12 strokes.

In between he takes naps or relaxes with an iPad loaded with chess games, crossword and Sudoku puzzles.

He said, “It takes more time to get myself fully awake with one-third cup of coffee before breakfast. Today as long as I am able to eat, I’m good.”

Asked if he mourns the loss of his physical strength and endurance, Araos, a communist rebel and former political prisoner, said, “My old physical endurance—I just hold on to it as a pleasant memory. It’s nice to think that once, I could trek to the Sierra Madre in 48 hours straight carrying supplies and firearms. The meaning of all that has been lost with time. We’re back to the former system that has become worse. Politics-wise, it’s as if nothing had happened.”

He cleared his throat, then added, “For me the only thing I did that lasted positively was my art and my marriage to Melen.”

Despite the laughter of grandchildren that fills his house on weekends, he is aware that his time is limited. “I seem to be going back to my childhood in terms of old age because of my diminishing usefulness and increasing dependence on others. I have accepted that.”

In Antipolo, he still has a garden where he can spend time just musing. Writer-singer Alex Dacanay, who sang “If I Were a Rich Man” at the recent exhibition reception, said he was singing the song with irony because as far as Araos stands with his friends, he is hardly a poor man.