The new breed of TOWNS awardees ‘thinks out of the box and walks the extra mile’ | Lifestyle.INQ ❮ ❯ 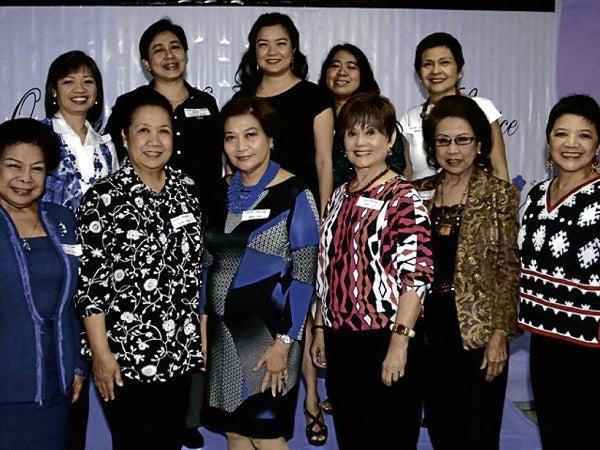 Of five oceanographers based in the Philippines, Laura David became the first Filipino in that field, and earned The Outstanding Women in the Nation’s Service (TOWNS) award in 2010 for her studies.

The 44-year-old professor at the University of the Philippines College of Marine Science explained about her job, “We get consulted if you have to build near the coast or if you need to know where the water is going; where to build, and the incremental effect. Offshore, we look at climate.”

She cited a recent study that the sea level in the Philippines is rising at an alarming rate compared to the global trend.  “Looking at the satellite data in the past 30 years, we compared the global rate, which is 3.5. Ours is 7 to 10.”

Recommendations were made to the Department of Environment and Natural Resources on best practices for future developments, such as moving away from coastal developments, or building structures that could withstand high floods.

“We have to examine our development. As a nation, we like to be near any body of water. If you ask any Filipino child to draw their dream house, it’s by the water. As the sea level continues to rise, we need to start developing away from the coastal areas. Leave them as open lands. Cultivate mangroves, coral reefs and sea grasses, so there’s protection from future storms.”

David, who got her doctorate in oceanography from the University of South Carolina, represents the new breed of TOWNS awardees. In the past, the awardees were high-profile or recognizable names in traditional disciplines such as former Sen. Leticia Shahani for foreign service, columnist Rina David for women’s rights advocacy, broadcast journalist Cheche Lazaro, advertising executive Yoly Ong, Evelyn Singson for finance, Ces Drilon for media, ballerina Lisa Macuja for the arts, champion bowler Bong Coo for sports, Mona Valisno for education, and Lilia de Lima for law, to name a few.

Not in the limelight

Recently, the awardees have been women in the sciences or male-dominated fields.  “The direction is to spread the award to cover more people who are not usually recognized in their fields,” said Lorna Kapunan, secretary of the TOWNS Foundation Inc. “We are trying to recognize them because they are not in the limelight. We want to give them the limelight now. They deserve it.”

Kapunan won the TOWNS award in 1995 for law. Although a corporate lawyer, Kapunan has handled pro bono cases, especially of battered women, written a primer on women’s rights, and dispensed advice on broadcast shows. She also sits on the board of the Red Cross, World Wildlife Fund, Ballet Philippines, Zonta Club, International Crescent for Red Cross, and People for the Ethical Treatment of Animals.

Kapunan has been in the spotlight for cases such as former President Arroyo’s plunder case, and for such clients as Aleli Morales-Arroyo and Rhian Ramos.

Asked about her good-looking clients such as athlete James Yap, endorser-entrepreneur Hayden Kho and actor Derek Ramsay, she remarked, “Hazards of the trade.”

The recent awardee for alternative lawyering, solon Arlene Bag-Ao, was honored for championing grassroots organizations. She gained international exposure as the lead counsel of 1,700 Sumilao farmers fighting for their farmland in Bukidnon, against a large corporation.  This year she was the only female member of the prosecution team in the impeachment trial against Chief Justice Renato Corona.

Kapunan described the TOWNS awardee as “passionately crazy.” “The typical TOWNS awardee thinks out of the box and walks the extra mile.”

In the past, the screening committee and judges have rejected nominees who, despite their media exposure, lacked a body of achievements with an impact on the society.

The candidate must be between the ages 21 and 45. After 45, one has already been well-established in society, said Kapunan.

In the last batch, Kara Constantino-David was probably the only high-profile awardee, who was voted by her peers for her reportage and documentaries.

The expansion of the fields beyond the mainstream discipline acknowledges the women’s entrepreneurial spirit. Recent winners have been trailblazers.

Jo Enrica Enriquez, executive director for Coalition Against Trafficking in Women (Asia-Pacific), advocated the passage of the anti-trafficking law.

At 25, Therese Fernandez, president of Rags2Riches, became the youngest TOWNS awardee. Her company recycled over 700 tons of scraps into fashionable lifestyle items which are sold overseas.

Agriculture researcher Marissa Romero did a study on Rice for the Health Conscious, which addressed the need to improve the quality of rice and processing of fruits and vegetables for better nutrition.

Another research specialist, Regina Alampay, made a study on Filipino work economics and how to make our culture work for the company and make it globally competitive.

Carmela Lapitan, the first female urologic surgeon to be admitted as diplomate in the Philippine Board of Urology, advocated quality care for Filipinos suffering from urinary incontinence.

Myla Villanueva, CEO of Novare Technologies and president of Global Telecom Women’s Network, not only pioneered in the information and communication technology, but also mentored other women to become leaders in this field.

The launch of the search for TOWNS awardees also coincided with the inauguration of the collection of Burmese puppets and African dolls at the Museo Pambata, headed by Nina Yuson, another TOWNS awardee.

“It is important to perform peace functions, represent, negotiate and protect interests if you understand the culture of country where one is assigned,” she said.

Tirona bought the Burmese puppets to support their makers. Posted in Burma from 1990 to 1993, she recalled:   “I arrived before Aung San Suu Kyi was put under house arrest. I was the only ambassador in the world to be assigned then. They teased who was more dangerous—the lady outside or the lady under house arrest?”

Tirona was tasked by President Corazon Aquino to hand-carry a note to the chair of the State Law and Restoration Council. Aquino requested that the chair grant Aung San’s husband, Michael Aris, and the sons, Kim and Alex, visiting rights.  She also urged the council to appoint a civilian in the military cabinet and to convene a constitutional convention to pave the way in returning democracy.

“We accomplished the request to appoint a civilian in the cabinet who became the Minister of Foreign Affairs,” said Tirona.

Looking at the puppets behind the glass showcase, she said: “The puppets were public servant puppets.  In the military regime, there is no freedom of expression. In the play at the theater, they were relaying a message that there should be a democratic institution that must observe elements of good governance, such as transparency, accountability and honesty.”

The African dolls were mementos from her last posting in Nairob, Kenya. “I can see an affinity with the people of the world, although our looks are different. There is our belief in the freedom of every individual, regardless of color, religion and status enshrined in the UN’s Universal Declaration of Human Rights. The lesson there is that progress and development won’t be achieved unless we understand each other. With this, I’ve learned from TOWNS—how to be resilient and how to do my best.”