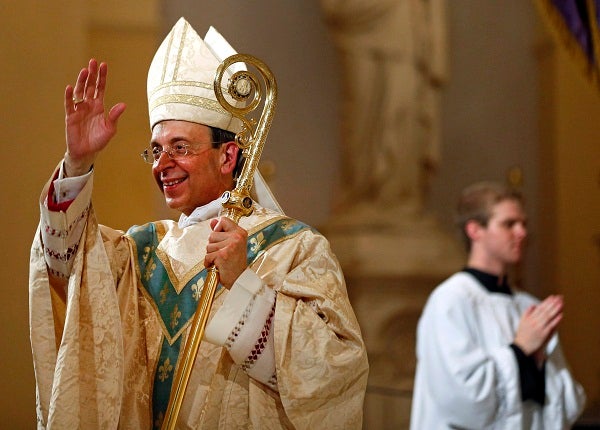 Baltimore Archbishop William Lori of Baltimore in September 2012 hosted a meeting of same-sex marriage opponents to mobilize for the campaign's home stretch. "The union of man and woman is not only a good for the couple, but for the entire community of believers and for humanity," Lori told the gathering. AP/Patrick Semansky

VATICAN CITY — The Vatican is digging in after gay marriage initiatives scored big wins this week in the U.S. and Europe, vowing to never stop insisting that marriage can only be between a man and a woman.

In a front-page article in Saturday’s Vatican newspaper L’Osservatore Romano, the Holy See sought to frame itself as the lone voice of courage in opposing initiatives to give same-sex couples legal recognition. In a separate Vatican Radio editorial, the pope’s spokesman asked sarcastically why gay marriage proponents don’t now push for legal recognition for polygamous couples as well.

Catholic teaching holds that homosexuals should be respected and treated with dignity but that homosexual acts are “intrinsically disordered.” The Vatican also opposes same-sex marriage, insisting on the sanctity of marriage between a man and woman as the foundation for society.

The Vatican’s anti-gay marriage media blitz came after three U.S. states approved same-sex marriage by popular vote in the election that returned Barack Obama to the U.S. presidency, Spain upheld its gay marriage law, and France pushed ahead with legislation that could see gay marriage legalized early next year.

“One might say the church, at least on this front, has been defeated,” L’Osservatore Romano wrote. “But that’s not the case.”

The article insisted that Catholics were putting up a valiant fight to uphold church teaching in the face of “politically correct ideologies invading every culture of the world” that are backed by institutions like the United Nations, which last year passed a non-binding resolution condemning anti-gay discrimination.

“The church is called to present itself as the lone critic of modernity, the only check … to the breakup of the anthropological structures on which human society was founded,” it said.

Vatican spokesman the Rev. Federico Lombardi, for his part, said gays can have their rights protected by means other than through legal marital recognition. He stressed that children should have a right to say they have a father and a mother.

“If not, then why not contemplate freely chosen polygamy, and naturally so as to not discriminate, polyandry?” he asked sarcastically. Polyandry is when a woman has two or more husbands.

“As a result, don’t expect the church to stop insisting that society recognizes a specific place for marriage between a man and woman,” he said.

The U.S. election had been closely watched at the Vatican because of the strong divisions that erupted during the campaign between the Obama administration and U.S. bishops over gay marriage, which Obama endorsed in May. The administration and bishops clashed more vehemently over Obama’s health care mandate requiring nearly all U.S. health insurance plans to cover contraception, which the church opposes.

The U.S. Conference of Catholic Bishops said the contraception mandate — which exempts houses of worship but applies to faith-affiliated employers — is a violation of religious freedom.

The Vatican’s reaction to Obama’s re-election was tinged with such lingering criticism, with Pope Benedict XVI congratulating Obama and praying that the ideals of freedom and justice continue to be upheld.

Lombardi went further urging the administration to respect essential values in “promoting a culture of life and religious freedom” — Vatican buzzwords referring to abortion, contraception and the insurance mandate.