A gigantic way to light up the Holidays | Lifestyle.INQ ❮ ❯ 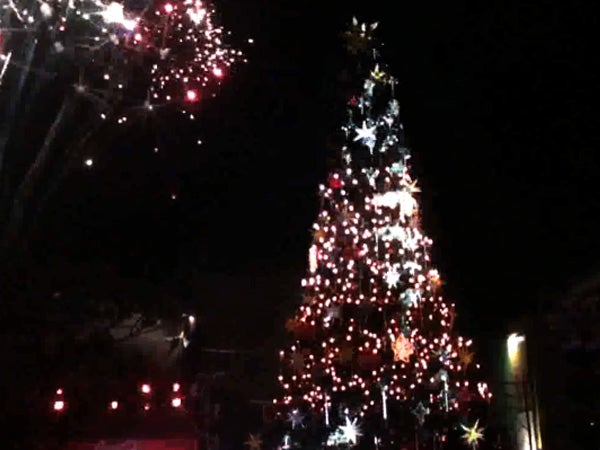 A gigantic way to light up the Holidays

MANILA, Philippines – A giant tree lit up the sky Friday night, adding to the glitter that Filipinos have come to associate with the Christmas season.

“What is unique about the Filipino Christmas is how long it goes on for, people are excited about celebrating as early as September to as late as January,” Anubha Sahasrabuddhe, Marketing Director of the Coca-Cola Company, said in an interview, at the traditional lighting of the tree at the Araneta Center in Cubao, Quezon City.

Guillero Aponte, president and general manager of Coca Cola Philippines, which is celebrating its 100th year anniversary, said that it was a “major, major accomplishment for the company” to have been celebrating Christmas with Filipinos for the last century.

“Once again … I’m here celebrating the longest Christmas in the world, which only happens here in the Philippines,” Aponte said during his remarks before lighting up the tree.

“We have a history of 100 years, imagine today when we will light up this beautiful three, we will be starting officially the 100th Christmas together with Filipinos, and that’s a major, major accomplishment for the company I represent tonight,” he said.

The gigantic tree was lit up to the joy of thousands of Filipinos who were watching. While the tree’s twinkling light bulbs, fireworks illuminated the cool night sky, a shower of confetti danced to the beat of Christmas songs that filled the air.

Aponte praised the Filipinos’ cheerful nature and said that their “warmth and hospitality” are what make Christmas in the Philippines very special and unique in the world.

Aside from the gigantic star atop of the Christmas tree, stars from rival networks GMA and ABS-CBN added glitter to the event: Louise Delos Reyes, Alden Richards, Jeric Gonzales, and Thea Tolentino from GMA and Joseph Marco, Matteo Guidicelli, Jessy Mediola, and Enrique Gil from ABS-CBN.