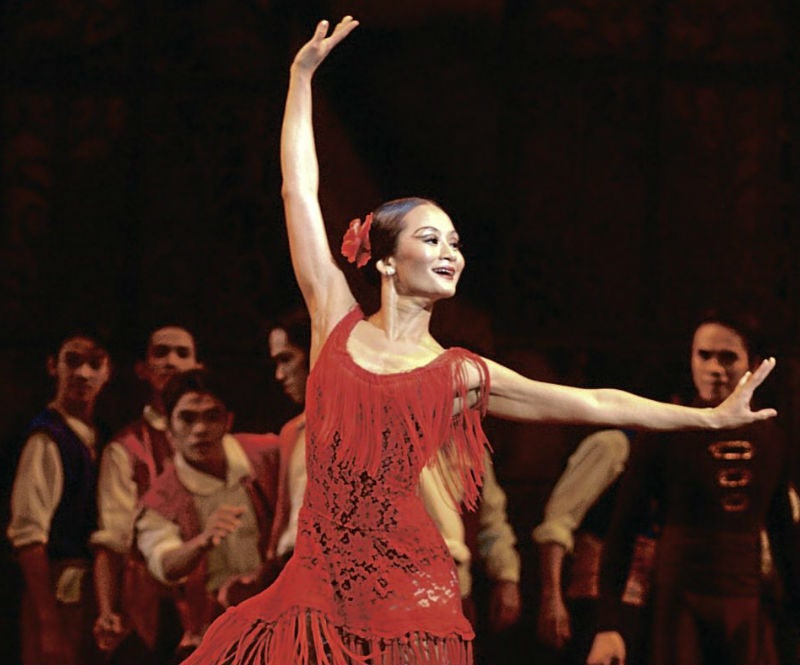 It is hard to believe that in a span of three weekends last October, prima ballerina Lisa Macuja-Elizalde bade farewell to three of her favorite roles: Kitri in “Don Quixote,” Giselle and Carmen.

As she so candidly declared at the close of her last performance of Carmen on Oct. 27, “How could I be retiring all these roles when I’ve never felt so better?” Indeed, how could she?

As she had said in countless interviews in the past, age and the numerous injuries she sustained through the years are finally taking their toll. At 48, Macuja is the country’s senior ballerina; all her colleagues have retired long ago, and none of the younger dancers can match her prowess.

She has managed to keep dancing her favorite roles by judiciously spacing out performances, mounting productions when she is fit. It also pays that she runs Ballet Manila, her own dance company.

But she knows when it is time to quit. Even before her legs and feet give up, she has already marked a three-year plan to retire all her dance roles. This year’s Swan Song Series is the second in this program. Last year, she let go of Odette and Odile in “Swan Lake” and Juliet in “Romeo and Juliet.”

Next year, the last year in the series, she will say goodbye to Medora in “Le Corsaire,” Nikiya in “La Bayadere” and the Sugarplum Fairy in “The Nutcracker.”

It must have been with much regret that Macuja danced her last Kitri. During the curtain call of her last performance on Oct. 7, she broke into tears onstage—and part of the audience wept with her, too. When will ballet enthusiasts in the Philippines see another captivating Kitri?

(It wasn’t her last “Don Quixote,” though. The next weekend, she danced the role for one last time for a student matinee. Talk about a change of heart.)

Kitri highlights Macuja’s strengths as a dancer: fast turns and speed. No one could match her entrance as she kicked her legs up in the air with abandon. And in the final pas de deux, her fouettés were simply impeccable. Despite surgery on her feet last year, she lost herself in her 32 turns, much to the crowd’s delight.

There is no need to intellectualize Kitri because, as she herself described it, “it is a shallow role.” What matters is how high you kick your feet; how fast you spin; and how quickly you circle the stage.

If you could accomplish all three perfectly with a steady smile on your face, then you pretty much have the role on the palm of your hand. And for a ballerina who has danced Kitri well into her 28th season as a dancer, that’s saying pretty much.

If her Kitri was pure energy, Macuja’s Giselle was pure drama. The pantomime in the first act draws out the actress in any ballerina who tackles the role, and she always delivered. It was always a pleasure to see her Giselle lose her mind; you know that Macuja the actress is taking over the role.

But all that acting is just preparation for the dancing in the second act. She always brought together the actress and the ballerina in her assumption of this lovelorn peasant girl who is transformed into a spirit.

Whereas Kitri was pure bubbling energy, Giselle must be a ghost on stage. The face is mostly bereft of expression, and the body is willed to float, glide and fly in the air. All those leaps and jumps are hard for any ballerina.

Macuja described the effort of dancing Giselle as comparable to running three marathons. But the effort never showed. Her wilis was like a feather that hovered from one leaf to another in the forest, that rolls like a tumbleweed with the breath of the wind. She evoked the image of gossamer, an apparition that vanished with the blink of an eye.

The ballerina broke down in tears at her final “Giselle” on Oct. 21. The audience cried with her, too. Again, when will they see another comparable peasant girl?

In both productions, Russian danseur Mikhail Martyniuk, principal of the Kremlin Ballet, partnered Macuja. Hailed as one of the most charismatic dancers in classical ballet today, he was a dancer worthy of the ballerina’s talents.

We were treated not only to a skillful display of dancing but also a mesmerizing presence that had you holding your breath with his each entrance. It was sacrilegious to suggest that he stole the show as Basilio from Macuja’s Kitri, but that’s how it felt like. His every move on stage seemed to be pregnant with action. He was suave and virile as the barber and a consummate dance athlete.

In “Giselle,” his Albrecht was no cipher to the ladies on stage. He came into his own in the second act, where he was dashing as he danced with Giselle and the wilis. In a ballet where the women reign supreme, he held his own and caught our attention. All in all, his presence in “Don Quixote” and “Giselle” lent allure to Macuja’s final performances in these two ballets.

Carmen, on the other hand, is not a technically demanding role. But Macuja felt she should give up the role while she could still muster the beauty and sensuality of the Gypsy cigarera.

The ballet, especially created by the late Eric V. Cruz for the ballerina, is a wonderful reduction of Bizet’s opera. It has all the elements of the grand ballet—power, sensuality and drama—all in just 40 minutes. It is perfect for a twin bill of short ballets.

There really was no reason for her to say goodbye to this role. Macuja still has it on the palm of her hand. She was sexy and vixenish in her seduction of Don José, terrifying in her feud with a fellow cigarera, and brave in the face of death. All those varying emotions played out on stage in under an hour, and the ballerina could command the nuances of the role without any difficulty.

For her final “Carmen,” she danced with the Don José of Rudy de Dios, BM principal danseur. Since Osias Barroso retired from the stage as Macuja’s dancing partner, she had danced with countless danseurs from her company. It was with De Dios that she found a worthy partner.

In Don Jose, he brought out the obsession and anguish Carmen brought to his character. In the final scene when he stabbed her after spurning his entreaties, you knew exactly how miserable Don José felt at that exact moment. His was a Don José worthy of Macuja’s Carmen.

This year’s Swan Song Series coincided with the introduction of live orchestral music in BM performances. An orchestra pit was built inside the Aliw Theater to accommodate a full-size orchestra.

The Manila Symphony Orchestra, under the leadership of guest conductor Alexander Vikulov, provided live music during the performances of “Don Quixote” and “Giselle.”

The Ballet Manila shows now offer a new opportunity for some of the country’s best musicians to further hone their talent. Their performances no longer focus on just the orchestral repertoire; this break in performing ballet music live will surely enrich their craft.

While Macuja might be saying farewell to some of her signature dance roles, she isn’t giving up dancing yet. Next up for her is a new production of “Sinderela” with choreography by Hazel Sabas-Gower. This will be BM’s holiday offering this December. Using the music of Prokofiev, the fairy-tale has been contemporized to reflect the public’s ongoing fascination with reality-based shows.

How will ballet fare when Lisa Macuja-Elizalde has finally hung up her pointe shoes? The ballerina intends to focus on guiding BM dancers in future productions of the classics, as well as bringing in foreign dance talents to give local theatergoers an opportunity to watch them live.

And while she might have retired her favorite roles, Macuja promises to dance in some shows, although her participation will be minimal, mostly on popular divertissements during special shows.

The future isn’t that bleak for dance in the Philippines.