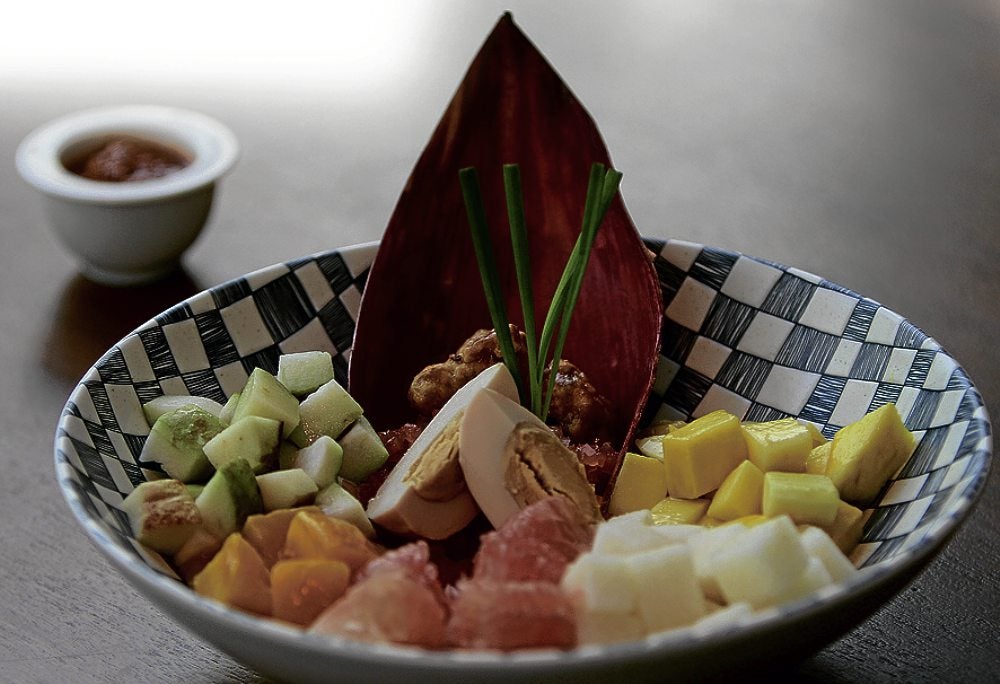 M Café now has a ‘Kabila’ of reinvented Filipino specialties

When it closed for renovations a couple of months ago, Museum Café at the Ayala Museum complex was due for an update. The owners, Raintree Restaurants, had a good thing going there, but they felt it was time to offer something new.

That something is a Filipino restaurant serving its take on traditional Pinoy food.

Dubbed Kabila, the restaurant shares precious retail space with the café, an arrangement the group first tried out with Stella and Rocket Room when they opened the two restaurants earlier this year at Bonifacio High Street Central in Taguig.

Now, guests can choose to be seated on either the right (Museum Café) or the left side of the room (Kabila). They can also cross-order from either menu.

A cheese plate featuring different cheeses from Davao’s Malagos Farm or a platter of thinly sliced Excelente ham and toast rounds might not seem Filipino at all, but these can be found on the new menu.

“Instead of labeling our dishes as ‘authentic Filipino,’ we decided to come up with items that were Filipino in origin but were our interpretations of them,” Martin Wisniewski, vice president of Raintree Restaurants, said.

To this end, he and chef Kalel Chan went on a culinary road trip of Luzon armed only with an open mind and the book “Linamnam” by husband-and-wife authors Claude and Mary Ann Q. Tayag.

“We already had a few dishes in mind, including my grandmother’s lengua and beef sinigang, but we wanted to augment this with other items like pork bagnet, dinuguan and Bicol Express,” Wisniewski said.

He narrated how he was surprised to see bagnet and empanada fried using cooking oil that had turned dark because of repeated use.

“In Vigan, we decided to forego our empanada and come back the following day because we thought the manang would use fresh oil. The next day, the oil was still black; maybe that was their secret ingredient,” Wisniewski quipped.

Instead of trying to replicate the crispness of Vigan empanada, Chan used a flaky pastry with fluted edges,  filled with shredded papaya, salted egg and homemade chorizo.

Other “adaptations” include fresh lumpia with the usual ingredients (coco heart, shrimp and minced pork) but with a lattice-like egg roll wrapper; Kare-Kare made from scratch; and a colorful salad that combines chopped ripe and green mango, guava, pomelo and jicama.

After giving the menu a once-over, one might notice that the items are not exactly one of a kind. In fact, many of them can be found, in one form or another, in the many restaurants and eateries offering Filipino food.

What then sets the menu at Kabila apart from the competition?

“Eventually, we will introduce new items but since this is new for us, we didn’t want to scare off people with exotic dishes. In fact, our Kaldereta which uses New Zealand lamb is one of our slow movers, because Filipinos are still not big fans of lamb,” Wisniewski said.

Despite the wary start, they could be doing something right—their dinuguan is  one of their bestsellers.

“It took us over 20 versions before we came up with a dinuguan that everyone liked. Every time [Chan] presented a new variant, somebody always found fault in it. It was either too dry, too soupy, too sour, too salty or too fatty,” Wisniewski said.

Now, the dinuguan at Kabila is deliciously described as “a spicy ginger and lemongrass pork blood stew topped with crispy pig’s ear and served with puto.”

Maybe in the next few months, guests will be treated to a selection of new dishes not found in every other Filipino restaurant.