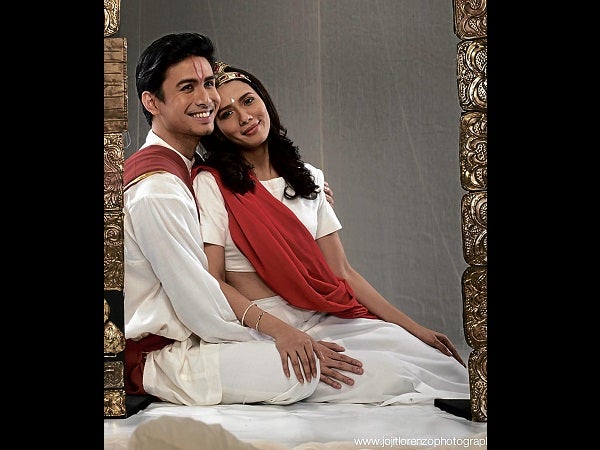 ‘Rama, Hari’ all set to dazzle us again–this time with Karylle and Christian Bautista

I was a young child when I watched “Rama, Hari,” Ballet Philippines’ popular ballet musical, decades ago. It was my first time to go to the CCP and I remember the jaw-dropping experience of seeing its giant fountain all lit up, the seemingly mile-long circular drive, the astounding, larger-than-life HR Ocampo mural.

But even more vividly, I remember the dance and the songs. They were dazzling, otherworldly, almost mystical. Certainly, it was the stuff of legend.

“Rama, Hari” happens in the Kingdom of Mithila. Prince Rama, the epic hero, falls in love with the beauteous Princess Sita and, after many tests of worthiness, wins her hand. But not all is well. Rama, scion of King Dasaratha, is cheated out of his throne by his father’s scheming third wife, Kaikeyi.

Banished from the kingdom, Rama and Sita, accompanied by Rama’s brother, Lakshamana, take to the woods. But Sita is captured by the evil demon Ravana and his vengeful sister, Soorpanakha. Hanuman, the monkey king, leaps to her defense—and to this day, I can still picture his resplendent red and gold costume and the many soaring leaps of his bowlegged, sidestepping dance.

It’s not every day that one can watch an epic story played out in song and dance. But from Nov. 30 to Dec. 9, all the stars will align and the brightest, most talented and some of the most recognized names in Philippine arts and culture will collaborate with much pomp and pageantry to restage “Rama, Hari.”

Reprising the roles originally sung by Basil Valdez and Kuh Ledesma are Christian Bautista and Karylle, as Rama and Sita in this restaging.  And what music they will regale us with! The libretto was written by no less than National Artist for Literature Bienvenido Lumbera, and is set to music by pop icon and chart-topping Ryan Cayabyab.

I can still remember Kuh Ledesma as Sita, lissome and gorgeous as she sang the heart wrenching “Magbalik Ka Na, Mahal,” one of “Rama, Hari’s” hallmark songs, which went on to top the pop charts and has since been recorded by other artists.

Imagine this and the other Lumbera-Cayabyab songs sung live by Christian and Karylle, as well as OJ Mariano, Kalila Aguilos and other singers of note, backed up by the full orchestration of the Manila Symphony Orchestra. That’s one magical evening to look forward to.

And the dance! No less than Alice Reyes, the multi-awarded founder of Ballet Philippines, comes back for this restaging.  Jean Marc Cordero, recipient of a special jury award in the 2012 Helsinki International Ballet competition, alternates as Rama with Richardson Yadao.

But even more than the big names, the flourish and its proven pop heritage, “Rama, Hari” is a completely Asian-Filipino offering. Its story is of epic proportions, and each step and note throbs with the legends of our forefathers. It is the quintessential battle of good versus evil where the hero stands tall, resilient, fearless, unbowed.

Decades ago, I was starstruck and dance-struck as well. I was so enamored by “Rama, Hari” that I enrolled in ballet class under Tita Radaic right after. Now, decades after, I will be bringing my sons Manuel and Gabriel who, until now, have only read of epics in Literature class and can’t wait to see one unravel right before their eyes.

Decades after, the child in me remembers, and the woman I have become is prepared to be starstruck and swept away all over again by “Rama, Hari.”

“Rama, Hari” will have 11 shows from Nov. 30 to Dec. 9 at the CCP Main Theater with the Manila Symphony Orchestra playing live. For tickets and inquiries, call Ballet Philippines at 551-1003 or Ticketworld at 891-9999. Visit www.ballet.ph or www.facebook.com/balletphilippines.