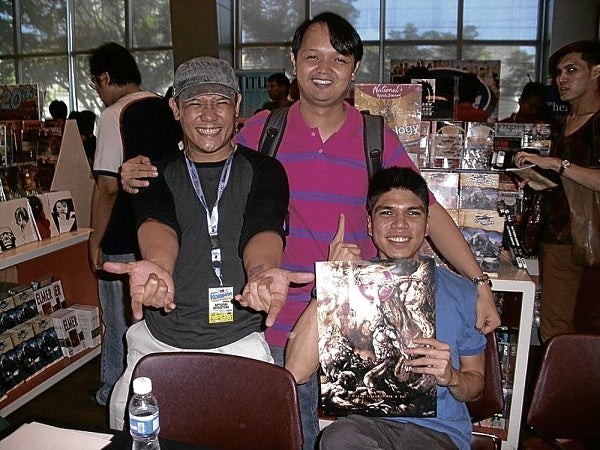 Who says Pinoy ‘komiks’ are dead?

Last Oct. 27, the eighth Philippine Comics Convention or Komikon was held at the Bayanihan Center in Pasig. Eighth, you say? You bet! But isn’t Pinoy komiks dead? Breaking news, son: it never died!

Let me take you back some two decades to 1993. The once giant Philippine comics industry was on the wane, with decades-old komiks companies closing their doors one by one.

But at the same time, something strange was happening. Without any venues to showcase their work, talented young comic book fans started creating their own comic books. They photocopied the page, stapled them together, and sold the comics themselves. Some even went further by actually going to the printing press and have multiple copies printed.

Where did they get the money? Most likely some of them had jobs, some of them probably saved up for it, and some probably borrowed money from their parents. Whatever the case, what resulted was the birth of a unique Filipino independent comics industry driven by young people who created, distributed and sold their own comic books.

Even as early as 1994, comics shows were already beginning to be held, starting with a mini convention at the Robinson’s Galleria where enthusiastic comics creators like Budjette Tan, Arnold Arre, David

There were quite a few shows that followed there and at other malls, each event growing bigger than the last. The year 2003 saw the very first San Pablo City Comics Festival organized by the Komikero Artists Group, which signaled the growth of such events outside of Metro Manila.

Along the way, remarkable self-published comic books started to appear,

In 2004,  a group of particularly dedicated comic book fans and creators called The Artists’ Den decided to organize the first Komikon and hold it at the University of the Philippines, Bahay ng Alumni. Within a few years, the venue had become too small to accommodate the growing number of comics creators and fans. The event moved several times from Star Mall in Mandaluyong, to the Megatrade Hall in Megamall, and eventually to their current home, the Bayanihan Center in Pasig.

Komikon is now held twice a year, once in the summer called Summer Komikon, and the main Komikon held around the end of the year.

That the growth of Komikon and that of the independent comics industry go hand in hand is worth considering.  Most of these creators create, sell and distribute their own comics. With no huge distribution arm at their disposal, they sell their comics at every place they are capable of reaching.

They can sell at the various comic book stores across Manila, including Comic Odyssey, which has always been supportive of local comics, and of course, they take full advantage of the local comic book conventions, wherever and whenever they are held.

Big publishers have noted the success of this growing industry, and have taken it upon themselves to select some of the more popular and successful titles and publish them, affording the comic books a larger audience than what they would normally achieve.

Adarna has taken on Arnold Arre’s works and have published “After Eden,” Visprint has published both Budjette Tan and Kajo Baldisimo’s “Trese” as well as Carlo Vergara’s collected edition of “ZsaZsa Zaturnnah,” and National Bookstore has published “Skyworld” by Mervin Ignacio and Ian Sta. Maria, as well as “Elmer,” 2nd Edition by yours truly.

With the big publishers getting into the act, it necessited a third spin-off convention of the Komikon called the “Indieket,” which emphasizes and showcases the very roots of the independent comics industry, the self-published comic book makers who photocopy and print their own comics.

That the Komikon has held such a spin-off event shows how they staunchly want to stay true to their roots, at the same time being open to growth and maturity.  While these small groups are still a very big part of the main conventions, I think that it’s only fitting and right that they have a show all their own.

At the Komikon last October, more new and better comic books were released by an even younger generation of creators as the venue struggled to accommodate the sheer number of people in attendance.

Across the country, even more comics conventions are being held. There have been conventions in Baguio, Bicol, Cebu, San Pablo City, Los Baños, and this year sees the very first Iloilo Comics Convention in December. In January, next year there’s possibly another one in General Santos City.

Pinoy komiks is dead? You must be crazy!