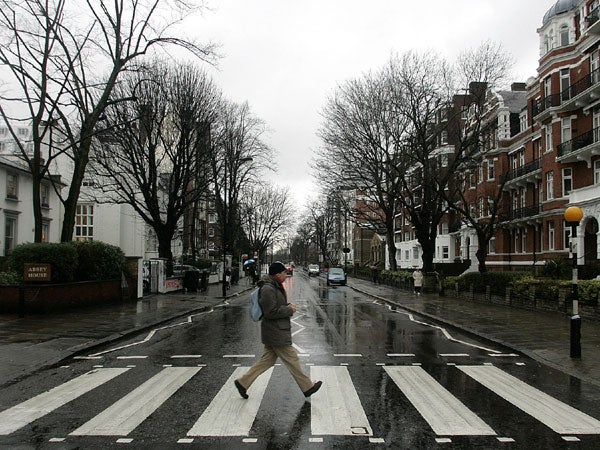 A man walks on the zebra crossing made famous from the album cover of The Beatles' "Abbey Road" in front of Abbey Road Studios, seen at left, in London. London counts at least 11 Abbey Roads, with potential tourist pitfalls in neighborhoods such as Barking or Bexleyheath, both of which are on the outer edges of central London. In the British capital, as elsewhere, the common street name harkens back to the medieval priories that once dotted the area. (AP Photo/Akira Suemori, File)

More than nine miles (14 kilometers) from the striped crosswalk made famous by the Beatles album “Abbey Road,” this drab transit station in east London keeps drawing confused fans of the Fab Four into unwanted jaunts through a gritty, industrial area just south of London’s Olympic Stadium.

Abbey Road Station has no relation to the Beatles’ Abbey Road Studios, the birthplace of the eponymous album and a London tourist landmark. The glass-and-metal station is wedged among a train depot, warehouses, and gloomy public housing projects, a world away from the leafy, suburban street pictured on the album’s cover.

It didn’t take long for American visitor Christie Johnson, 22, to figure out she was in the wrong place.

“It didn’t look right,” the Denver resident said. She and her embarrassed host — English student Melody Vettraino — wanted to see the iconic crosswalk on a whim.

At the nearby Star Newsagents, 36-year-old Paramjeet Kaur said her convenience store saw an average of a dozen Beatles fans a day.

Outside, 19-year-old Nathan Johnson said he was constantly seeing visitors stride across the small, uneven intersection outside the station to recreate the pose struck by Paul McCartney, John Lennon, Ringo Starr and George Harrison on the 1969 album cover — even if the newcomers have come to the wrong place.

“All the time,” Johnson said, smiling.

London counts at least 11 Abbey Roads, with potential tourist pitfalls in neighborhoods such as Barking or Bexleyheath, both of which are on the outer edges of central London. In the British capital as elsewhere the common street name harkens back to the medieval priories that once dotted the area.

But Abbey Road Station, which opened last year, is the only one in London to bear the name. Given the Beatles connection, some have urged the capital’s transit authority to modify its maps.

Transport for London officials said Tuesday there are no plans to change the station’s name.

Spokesman Allan Ramsey said in a statement that it is unfortunate that some visitors get confused but that the problem could be remedied if visitors just did their homework.

Christie Johnson, a semi-professional soccer player, said she wasn’t too disappointed to have gone to the wrong Abbey Road, explaining that she wasn’t that big of a Beatles fan anyway.

She said she mostly just wanted a picture of herself on the famous crosswalk to show her friends. Now, she’ll have a different story to tell.

At the London Beatles Store, which sells Fab Four memorabilia, owner Howard Cohen said the mix-up over the location of the studio is not new — because there are so many Abbey Roads in London — but that the mishaps have been exacerbated by the new Abbey Road Station in a distant part of the capital.

“We get so many people coming in looking for the studios that we have maps printed up with directions, free, as a service,” he said. “It’s a bit confusing.”

Even worse, he said, are the hapless tourists who arrive at Liverpool Street Station in central London and believe they, in fact, are in Liverpool, the Beatles’ hometown.

“They ask how to get to Penny Lane and Strawberry Fields,” he said, referring to places in Liverpool made famous by Lennon-McCartney songs.

How to get to the Beatles’ Abbey Road: From central London, take the Jubilee Line north to St. John’s Wood Station. Then walk west for three blocks on Grove End Road. Abbey Road will be on your right.