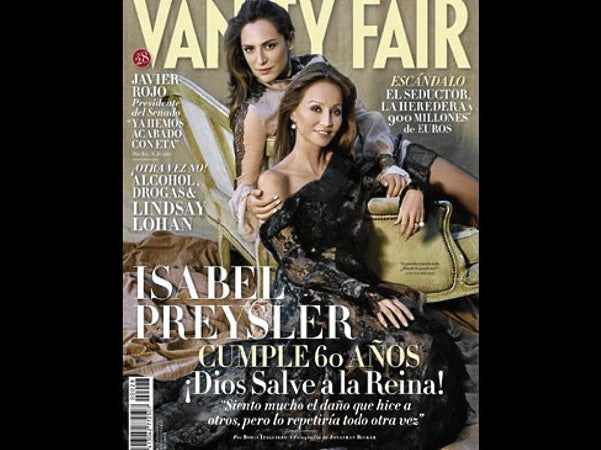 Isabel Preysler back in Manila

One of the most beautiful and glamorous ladies is coming for a four-day visit. Isabel Preysler or “La Preysler,” as she is called by the Spanish press, will be in town to attend the launch of the Porcelanosa showroom at Bonifacio Global City (BGC) on Nov. 29.

It’s been close to five years since her last visit, when she graced the Inno Sotto fashion show. She will be accompanied by one of her daughters, the beautiful Tamara Falco, and the handsome bullfighter Cayetano Rivera.

About two months ago, I was invited by luxury watch brand Jaeger-LeCoultre to the 69th Venice Film Festival and to interview one of the brand’s spokespersons, debonaire British actor Clive Owen.

He is best known for his films “Elizabeth: The Golden Age,” “Sin City” and “Closer,” where he won a Golden Globe award. The interview was at the Bauer Palladio Hotel and Spa, and it was a glorious afternoon when I met the charming actor.

He was funny and down-to-earth, which made the interview such a treat. We spoke about various topics, from his movies, the London Olympics, his charities and his family to his dream to be on Broadway.

When I asked him what’s the hardest part of being a successful actor, he readily answered, “I’m very fortunate, I’ve been very blessed in life. The toughest thing about what I do is the travel and being away from home. It’s hard being away from my family, but we’ve been very privileged in other aspects.”

Owen is married to British actress Sarah-Jane Fenton (whom he met at the Royal Academy of Dramatic Art while doing “Romeo and Juliet”) and they have two daughters. (For the full interview, read the Philippine Tatler, November 2012 issue.)

This week was a whirl of events and it isn’t December yet, I need to stock up on some Berocca to make it through! I attended the opening of Ben Chan’s newest baby, the Italian furniture store Cappellini at BGC.

The store is known for its collaboration with design superstars Tom Dixon, Jasper Morrison and Marc Newson, to name a few. Another feather in the cap of the King of Retail! Congratulations, Ben!

I also went to a birthday dinner for one of the most dynamic and amazing women I know, Doris Ho, who was cited as the Global Filipino executive of the year at the Asia CEO awards. The dinner was held in the beautiful home of Chris and Nanette Po and was wonderfully planned with good friends Ricco and Tina Ocampo, Lizzie Zobel, Monique Villonco, Joji Yujuico and her family.

There were two events  I was not going to miss. The first was the launch of Don Jaime Zobel’s book, “The Creativity of Jaime Zobel,” and the 35th anniversary of Josie Natori, both at the Ayala Museum. Both individuals have brought so much honor and pride to the country for their life, contributions and  pursuits!

Last night was the 11th Philippine Tatler Ball held at Makati Shangri-La. I can’t believe I have been the editor of this magazine for 12 years. It’s been a great journey filled with learning curves, triumphs and fulfillment. I am grateful to all the friends who attended and have supported us all these years. Here’s looking forward to more exciting years ahead!