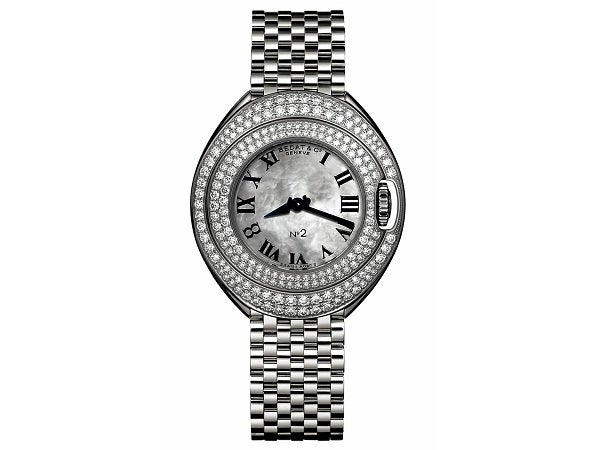 WHEN IT comes to ladies’ watches, the Philippines is considered by leading watchmakers as a mature and sophisticated market compared to the rest of Asia, excluding Japan. Heavily influenced by Europe and the US, Filipino women are more into streamlined watches with rectangular cases.

In contrast, more women in Singapore, Hong Kong and China prefer watches with round cases, as the Chinese consider the shape lucky. In Japan, more women prefer smaller watches, while their Middle Eastern counterparts are more drawn to bigger ones.

With David Keel, Bedat & Co.’s head of business development, the couple met with lifestyle journalists over lunch to talk about latest developments concerning the brand.

Rustan’s exclusively distributes Bedat, a Swiss watch brand established in 1996 by the late Swiss watchmaker Simone Bedat, in the Philippines. Except for two styles, the rest of Bedat’s numbered collection are all geared to women.

“In lieu of words, Bedat uses numbers to distinguish each item in its collection,” said Low. “The universal language is not French, English or Chinese, but numbers.”

Numbers 3 and 8, both round watches, are popular in Asia, except the Philippines, while numbers 7 and 1, because of their rectangular shape, sell well in Europe. Most Japanese women go for number 3, while Middle Eastern women prefer a bigger version of the same number.

Low introduced Bedat in the Philippines, sold with other watch brands at Rustan’s.

This time, he and his wife are opening Bedat’s first store in Manila. Low declined to reveal how much money his company, Luxury Concepts, invested to acquire the brand.

When PPR Gucci Group, the company behind Bedat, finally decided to sell the brand, including its operations in Geneva, Switzerland, one of the first people they asked was Low.

Before that, Low was content selling watches for them. But after investing so much in Bedat, including opening a huge flagship store in Kuala Lumpur, he couldn’t bear to see the brand go through an uncertain future.

“In 2008, we opened a big Bedat boutique in KL with the king and queen of Malaysia cutting the ribbon,” he said. “In less than a year, board members of PPR Gucci had a meeting in Europe and came to the agreement that the watch business was too small and too insignificant for them.”

Apart from not wanting to lose face in Malaysia, Low and his team at Luxury Concepts really believed in the brand. It has pedigree, heritage and artistry, three elements in Low’s book that set Bedat apart from most watch brands.

“At the end of our discussion, the guy at PPR Gucci noticed how convinced we were with the brand,” said Low. “He came up with the idea of selling the brand to us, including its operations. That was how we ended up with the brand.”

But Low knew the importance of maintaining the brand’s pedigree by keeping production in Switzerland. He likened Bedat’s unique position to a number of global luxury brands, which originated in Europe, but are now owned by companies based mostly in Asia.

“Bedat may be Malaysian-owned, but it remains very much a European brand,” he said. “Actually, it’s not an issue to us. I just want to clarify and share the information with the public.”

His company also ended up hiring the brand’s experienced designers and craftsmen, many of whom are sons, grandsons and even great grandsons of experienced Swiss watchmakers, to ensure that they stay true to the brand’s DNA.

When friends first heard of Low’s decision to acquire the brand, they thought he was crazy, because making watches in Switzerland can be very expensive.
“They suggested that we just make them in China where it’s cheaper and better. I told them that it’s not about being cheaper and better. It’s about remaining pure and honest. We’re just custodians of a fine Swiss-made watch brand, and we intend to keep it that way,” he said.

Both the watch’s cases and movements aren’t mass-produced goods. Instead, they are made in Switzerland based on skills and knowledge passed on from one generation to the next.

“It was a promise we made to Madame Bedat, and we intend to honor our promise,” he said. “The Swiss have turned watchmaking into an art form. There’s no room for compromises by having parts made and assembled elsewhere. The process can be done only in Switzerland.”

For one, he said, a good number of Bedat’s cases have plenty of curves that can be done only by hand. Not even the most sophisticated machines can reach rounded corners that need polishing.

Even from an engineer’s point of view, it’s quite hard to piece together a Bedat watch by machine. Almost everything needs to be done by hand. Such a process requires time, dedication and experience.

“If you want a watch that doubles as heirloom piece you could pass on to the next generation, you go for a Swiss-made watch with a reputation for quality,” said Low. “Our watches may look attractive and stylish, but they’re more than just fashion items. They’re for keeps.”