Kevin Tan: ‘Dad knows how to motivate, to spot what you want’ | Inquirer Lifestyle ❮ ❯ 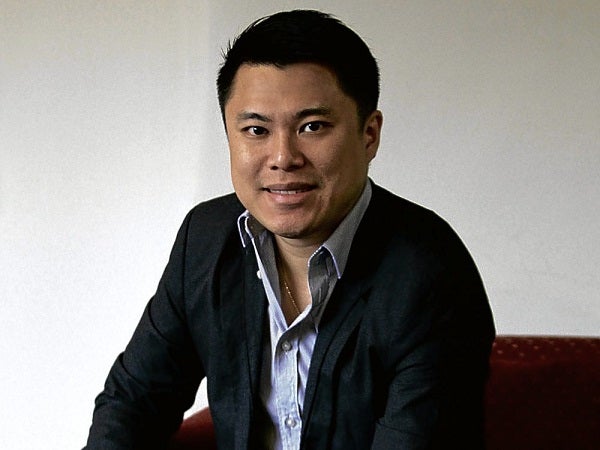 Kevin Tan: ‘Dad knows how to motivate, to spot what you want’

When Kevin Tan was eight years old, he was sent by his parents Andrew and Katherine to Hong Kong to spend his grade school there at the Chinese International School.

“It’s a new country to me, with many ‘expats,’ Korean, Brits. I learned. My mom didn’t want me spoiled. They wanted me to experience what it was like to be on my own, practically.”

This, at age eight, when other boys Kevin’s age were literally tied to their mom’s or yaya’s apron strings.

Taipan Andrew Tan must know something some parents don’t: how to spot your child’s potential strength and to let go, to make him develop it himself.

“Dad knows how to motivate, to spot what you want, and he just steers you in that direction,” Kevin says on hindsight.

Among his four children (three boys and one girl), Tan must have noticed that it is Kevin who is the most extroverted, and such outgoing character saw Kevin through his early school years away from home and onward to his role in Megaworld, the public-listed conglomerate founded in 1989 by Kevin’s father, Andrew, the self-made billionaire.

After a degree in Business Administration, with Management major, at the University of Asia and the Pacific, Kevin was selling residential condominiums and doing commercial leasing for Megaworld when his father tapped him to develop Eastwood into a lifestyle mall. “He must have thought I would get bored selling condos. He knew I was more of a ‘lifestyle person,’ always going out, because he never saw me at home anyway,” says Kevin with candor.

Looking back, Kevin believes that his development of the lifestyle mall in Eastwood City in Quezon City became a turning point in his career. It was there where, in a manner of speaking, he earned his spurs. It was also there where he showed his interests and strengths—lifestyle—just as his father predicted.

“There were birth pains and learnings—the slow start. There was a previous management of the mall,” Kevin recalls the seminal years. “We had to do changes. We took time to understand what the market was looking for. At the onset, the Eastwood market has been always young. The youth is dynamic, but could it sustain the retail and restaurants?”

Kevin and his team thought it better to turn the mall into a family-oriented lifestyle mall. “It was uncharted territory,” he recalls. “Not even my father could guide me in designing the mall, in the tenant mix. When I’d look for validation, for a market study…nobody could really tell me.”

It was at this point that Kevin fell back on his observations from his travels, especially in the region. “The design and tenant mix was very important, to turn it into a community center.”

Not only did the reinvented Eastwood lifestyle mall succeed, it was also named the Shopping Center of the Year in 2010 by the Philippine Retailers Association.

It was also around this time that I noted how Kevin became more self-confident, more at ease with his business decisions—and definitely more dapper. Not only is Kevin wired to the lifestyle scene, he is also a natty dresser, easily one of the best-dressed bachelors around. You could see he knows his brands.

Loving lifestyle and fashion certainly helps when you have to develop a mall; it’s hard to fake interest in that. He certainly brings such passion into his handling of the leasing, marketing and operations of the Megaworld Lifestyle Malls that came after Eastwood, such as the McKinley Hill and Burgos Circle at Forbes Town Center at the Global City at the Fort, the Corinthian Hills in Quezon City, Newport Mall at Resorts World Manila in Pasay, and the latest, the Lucky Chinatown in Binondo, Manila.

These days he’s excited about the construction of the Venice Grand Canal at McKinley Hill. It will be a 30-minute gondola ride from end to end of the plaza there. “Sadly, the Philippines is not into riverside development, unlike Singapore or Thailand,” he says to explain the concept of this manmade wonder.

Clearly his mind now is on the development of the Megaworld properties at the Global City, after the successful McKinley Hill and the Burgos Circle. Their properties consist of 54 ha. of McKinley Hill, 5 ha. of the Burgos Circle and Forbes Town, 16.5 ha. of Uptown, 34.5 ha. of the old Jusmag and 34.5 ha. of McKinley West. All these comprise the largest land bank at the Fort in Taguig. Then there’s also the 25 ha. of Resorts World in Pasay.

“I’m very excited, not stressed at all,” he says about the big projects. “I genuinely love what I do. I’m very eager to complete the vision. Creativity is a never-ending process.”

But in the same breath, he talks about the humble beginnings of his father. His father was born in Quanzhou, China, but was raised in Hong Kong. He migrated to the Philippines in the ’60s and went to college at the University of the East. “He used to live in half of this room,” Kevin put in graphic terms how his father started from scratch.

What precisely did he learn from the struggles of his father?

“A sense of responsibility and discipline,” he says without a blink. “Every summer, we did errands for him. I helped out in his liquor business. He was very strict with deadlines. He’s always on time.”

After his grade school in HK, at 13, he was sent to Brent School in Pasig, where he learned again to mingle with students of different nationalities. After his college, he traveled and got to love New York. His travels always enrich him, he says. Not only is he a fashion plate, he’s also a foodie.

Kevin is also into photography—landscapes and weird objects.

He is engaged to a former banker and is planning his wedding next year.

He is undaunted by competition, be it in real estate or property or mall development. “One learns from competition. One looks at it as a challenge,” he says.