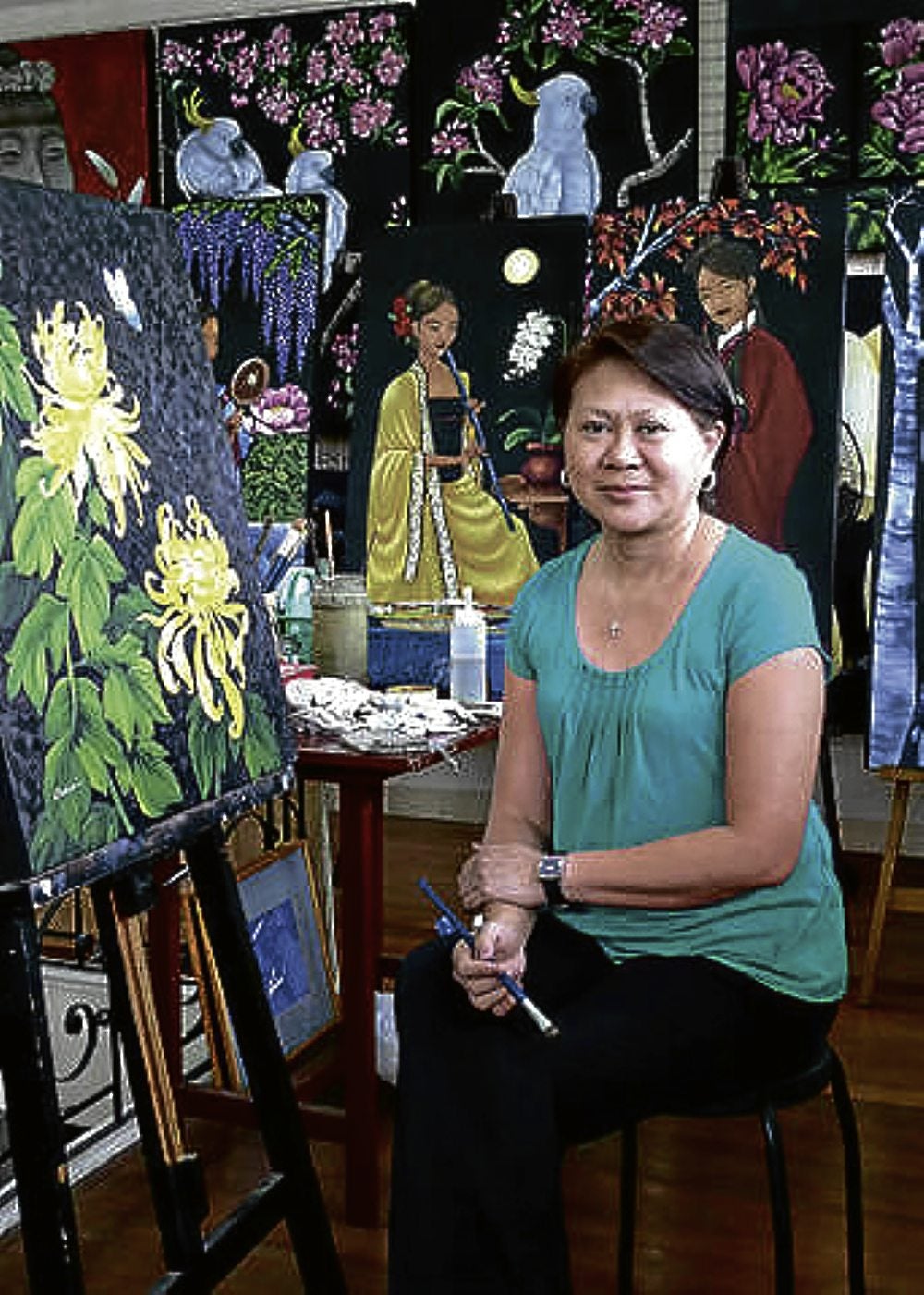 THE ARTIST in her studio

The show was significant for a couple of reasons: It was the 10th anniversary of Arte Pintura, an association of several artists, all of individual persuasions but bound primarily by a common love for painting which has fostered a meaningful friendship among its members.

The other reason was more personal: The show was a homage to the artist’s Chinese ancestry. Addie’s mother is pure Filipino, while her father, a Sycip, is Chinese. She is also married to Fil-Chinese physician Alexander Cukingnan.

By 2007, Addie had had seven solo shows and participated in numerous group exhibitions of Arte Pintura. (More impressively, as an entrepreneur, she had all these years been managing a successful Japanese fast-food chain, Kitaro. With the recent sale, however, of Kitaro to another business group, Addie can now attend to her painting with even more concentration.)

With her show “Heritage,” Addie—for that is how the artist signs her works—deepens her connection with the tradition of Chinese painting. To be sure, these works were not executed in the classic and traditional style, using brush-and-ink, rendered on silk or paper. Addie, who is adept in oil, paints in the Western style, with Western techniques, but subscribes to the lessons of classic Chinese painting.

Pure Oriental mystery and elegance radiate from Addie’s ladies depicting The Four Seasons, a subject unfolding the different climes and moods which the changing weather brings. In elaborate costume and feminine accoutrements, each woman is dolled up to maximum allure, though their wily attraction is reinforced by a sense of emotional distance. Addie relishes the flourish of each portrait’s rendition, from the flowery headdress to the flowing drapery of robes.

The theme of “The Four Seasons” is a classic format in Chinese painting which has been celebrated by ancient sayings that describe them: “The strokes grow with the grass on sandy banks and their lines join with the water and clouds (spring); “The land lies always in the shade and the air is coolest along the bank (summer). “I look afar at a desolate city and the flat woodland is still dark green” (autumn);” The brush moves ahead where the road fades away; the ink is heavy where the pond is cold (winter).

Addie’s ladies, however, personifies each a season. They are reflections of ancient Chinese painter Chou Fang’s “Beautiful Women” whom the scholar-artist Kao Lien lavishly praised. “They have an indefinable beauty, shown in their generous bodies, coy charm and decorous expression. They are not of the overpainted, lithesome type arousing lascivious thoughts in the viewer. The pupils of the eyes are like lacquer, and give a lifelike expression.”

In admiring Addie’s series titled “Full Moon and Misty Gorges,” the viewer can well imagine the artist, accompanied by her husband Alexander, when she went on a cruise tour of Yangtze River. The largest river in China, the Yangtze affords the visitors what travel brochures tout as “the thrill of a lifetime. Tourists enjoy the stunning scenery of the Three Gorges while exploring the ancient cultural sites along the river.”

Transforming the river into sheer reverie, Addie created dreamlike visions of massive towering mountains shrouded by banks of mist, the still winds stirred by the flight of white-feathered birds. Indeed, one construes the clouds crossing mountains for gentle sprays of waves.

Long ago, the Chinese painter Shih-T’ao surmised such a happenstance: “Its surf rises like hill crests and its ebb resembles mountain ranges.”

Recalling a 15th-century painting, Mu-chi’s “Bird on a Branch,” are Addie’s works titled “Cockatoo and Spring Blossoms” and “In Bloom.” Luxuriously detailed in the rendition of their plumage, their chromatic exuberance is by turns startling and exhilarating. They seem charged with a decorative incandescence. Preening with their glorious feathers, these avian creatures sweep the viewer’s aesthetic appreciation.

Chinoiserie is the spirit that breathes through Addie’s still lifes of blue-and-white porcelain vessels garnished with peonies, magnolias, geraniums and narcissus. Essentially a Western theme, harking back to ancient Greek and Roman times, the still life evolved from depictions of fruits and food items to objects such as skulls, mirrors and hourglass that allude to man’s mortality.

Addie’s still lifes are distinguished by the superb sheen of reflected light on the porcelain’s glassy surface, which depicts dragons, birds, flowers and leaves. Against a background of darkly intense black and blue, these objects appear to float in contemplative space.

The Chinese artist Kao Lien remarked: “Charm in objects relates to forms and shapes. One should look for spiritual likeness beyond material likeness, seek for life within its forms.”

Undoubtedly, Addie Cukingnan’s recent works do justice to her Chinese heritage. These paintings establish the artist as one who responds sensitively both to nature and the spirit that issue directly from one’s racial ancestry.