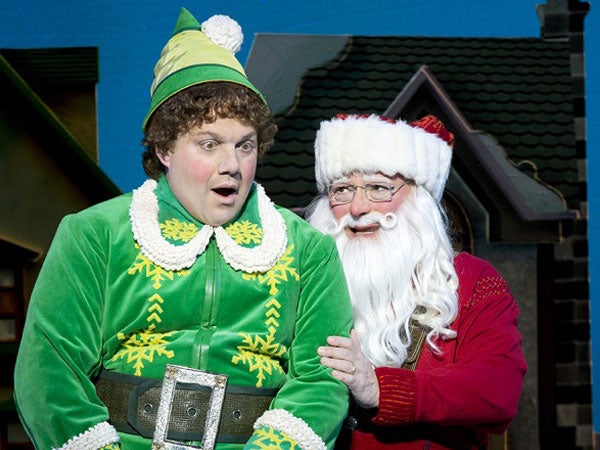 NEW YORK— Two years after Buddy the Elf made Broadway audiences believe in an unlikely theatrical adaptation of a Will Ferrell movie — an adaptation without Ferrell — “Elf” the musical is back with yet another lead actor and all the joy we’ve come to expect from the industrious toy-maker in green tights.

The splashy holiday musical opened Sunday at the Al Hirschfeld Theatre with a new opening number and fresh faces in a few principal roles.

It’s also worth noting what hasn’t changed, the core members of a stellar creative team that made this show a welcome addition to the holiday season when it premiered in 2010 for a brief run at the same theater.

The book, adapted by Tony Award winners Thomas Meehan (“The Producers,” ”Hairspray”) and Bob Martin (“The Drowsy Chaperone”), preserves many of the familiar punch lines you’ll remember from Ferrell’s hilarious 2003 film. Yet somehow this production doesn’t have the feel of a show that was plucked from the screen and retrofitted for the stage.

Rather it plays like a faithful but fresh revival of a golden-age Broadway musical, with its artfully towering sets, large company and lush arrangements of traditionally jazzy songs by Matthew Sklar (music) and Chad Beguelin (lyrics).

Jordan Gelber (“Avenue Q,” ”All My Sons”) spreads a wealth of good cheer as the always-grinning, irresistibly likable Buddy, who as an infant, crawled unnoticed into Santa’s sack and stowed away to the North Pole, where he was raised as one of the “big guy’s” little helpers.

All grown up now, the not-so-little Buddy leaves the workshop on a quest to find his “human” family in New York, where Christmas spirit is in such short supply that the whole city has been naughty-listed. (Gasp!)

Gelber embodies the arresting appeal of Buddy’s childlike innocence and charm, as he adjusts awkwardly and comically to life in the big city.

Striding into his dad’s office, his first day in “human work clothes,” he greets co-workers with his own brand of cheerful professionalism. “Good morning, Sarah. That’s a nice purple dress,” he says earnestly. “Very purplie.”

Gelber follows Sebastian Arcelus, who was the first to adapt the role Ferrell made famous.

There’s also a new Santa Claus. Two years ago, the role was played by “Cheers” star George Wendt. The current production deviates from the Norm, but maintains the sitcom flavor in casting a new man to fill the big red suit — Wayne Knight of “Seinfeld” fame.

The most important returning member of the 2010 production is its director Casey Nicholaw (Tony winner for “The Book of Mormon”), who also choreographs this slickly attractive spectacular.

Nicholaw teams with a who’s-who of creative talent that includes the set design of David Rockwell (“Hairspray,” ”Catch Me if You Can”), costumes by Gregg Barnes (“Follies,” ”The Drowsy Chaperone”) and lighting by Natasha Katz (“Once,” ”The Coast of Utopia”).

The result is a stocking-stuffing array of eye candy, fluid motion and vibrant color (with strong leanings toward red and green, of course).

Those expecting to laugh as much as they did at the movie won’t be disappointed. What might come as a surprise is just how polished these songs and arrangements are, particularly the larger-than-life opening number at Santa’s workshop and several scenes in a very strong second act.

Buddy clicks with an ensemble of supercool Santa impersonators on the bluesy, brassy “Nobody Cares About Santa Claus,” a raucously fun song-and-dance in a Chinese restaurant.

In the role of the Buddy’s stepmother, Beth Leavel shares one of the show’s most rousing numbers in the wordy, breathless “There Is a Santa Claus,” an upbeat duet with the elf’s 12-year-old brother, played by impressive star-on-the-rise Mitchell Sink.

Leslie Kritzer (“Sondheim on Sondheim,” ”A Catered Affair”) is lovely as Jovie, Buddy’s romantic interest, an attractive but sulky grinch of a girl who refuses to sing despite Buddy’s prodding. Luckily for us, he ultimately succeeds when Krtizer reveals her stunning voice on the catchy swing tune “Never Fall In Love,” which she sings under the stars and an enchanting elm tree illuminated in lights and hanging lanterns.

The return of “Elf,” which is at the Hirschfeld through Jan. 6, is just the thing for the Christmas list of any kid or grown-up. There’s no telling when we’ll see Buddy again in New York, but one can only hope it’s the beginning of a holiday tradition.