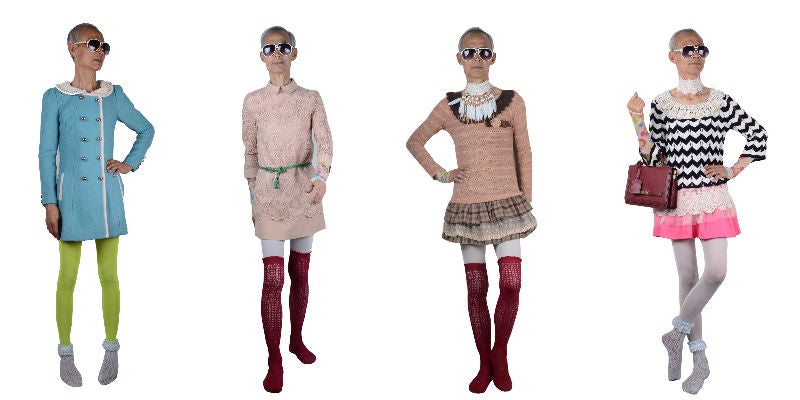 This undated photograph provided by Yecoo on November 21, 2012 shows Liu Xianping who is a 72 year old grandfather modeling for his granddaughters online fashion company "Yecoo" in Guangzhou, south China's Guangdong province. Grandpa Liu who has become an internet sensation in China spent most of his life as a poor farmer in remote Hunan Province. AFP PHOTO / Yecoo / Lu Tin

BEIJING–A 72-year-old Chinese man who became an Internet sensation after his granddaughter used him as a cross-dressing model to promote her clothing store was delighted at his new-found fame, she said.

The images of Liu Xianping have since gone viral and seen him branded the “world’s coolest” grandfather by Internet users for his slender legs and modelling poise. They have also boosted his granddaughter’s bottom line.

“Since the pictures came out, we’ve had a huge number of website visitors, and are selling five times as many clothes as before,” Lu told AFP.

“Previously, we sometimes sold less than 10 items a day, and were feeling depressed about the business.”

Lu said her grandfather was “surprised” by the reaction to the photos and at least three other stores had asked him to pose for them, but he was unlikely to accept.

“He doesn’t see modelling as a way of making money, it’s just about having fun with his relatives,” she said, adding she hopes to use his services again.

Liu “had a young heart”, she said, and enjoys visits to parks and zoos, as well as playing games on his mobile phone. “He thinks bringing people’s attention to the elderly is great, so he’s been very happy recently.”

The Offbeat China website, which tracks Internet developments in the country, said Liu’s modelling illustrates the transformation it has undergone.

“It is stories like this when one can get a sense of what a diversified society China has changed into in the past 40 years, especially for someone like Liu who has lived through one of the most rigid times in China’s history,” said a post on the site.

Liu, who has worked as a teacher and a farmer, did not need prompting to take up modelling, Lu said.

“My grandfather saw some new stock one day and thought some of the colors were pretty… he wasn’t embarrassed to model because we’re all very close to him,” she said, adding that his favorite item was a red women’s coat.