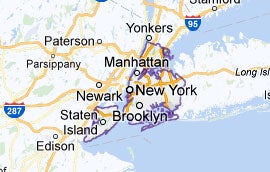 NEW YORK—Forget the traditional Thanksgiving holiday dinner. Many in the US chose to get an even earlier jump on Christmas shopping, even if that meant sleeping on the sidewalk outside stores.

The early morning shopping chaos that has become a day-after-Thanksgiving tradition crept back this year to eat into Thanksgiving Day itself. What was known as Black Friday—the day when stores traditionally turn a profit for the year—started on Thursday evening in many places.

When Macy’s opened its doors in New York City at midnight, 11,000 shoppers showed up. Target Corp. opened its doors at 9 p.m. on Thursday, three hours earlier than last year. Sears, which didn’t open on Thanksgiving last year, opened at 8 p.m.

Overall, it’s estimated that sales on Black Friday will be up 3.8 percent to $11.4 billion this year.

But it wasn’t holiday mood everywhere.

On a fog-bound Texas interstate highway 25 kilometers west of Beaumont, two people were killed and up to 100 injured in a high-speed pileup of up to 150 vehicles.

“We have 18-wheelers on top of cars, we have cars on top of cars. It’s just catastrophic,” deputy Rod Carroll of the county sheriff’s office said. Two bodies were found underneath a tractor-trailer.

The highway had been crowded with motorists traveling over the Thanksgiving holiday.

Elsewhere in the US, Michael Prothero, 19, and Kenny Fullenlove, 20, were among the early shoppers, missing Thanksgiving dinner altogether. They started camping out on Monday night outside a Best Buy store in Ohio.

Still, many Americans have grown more comfortable shopping online, which has put pressure on stores—which can make up to 40 percent of their annual revenue during the two-month holiday shopping season—to compete.

The National Retail Federation estimates overall sales in November and December will rise 4.1 percent this year to $586.1 billion, or about flat with last year’s growth. But the online part of that is expected to rise 15 percent to $68.4 billion, according to Forrester Research.

Some workers were expected to protest the Thanksgiving hours. A union-backed group of retail workers, called Retail Action Project, planned protests in front of several stores, including Forever 21 and others that were opening at midnight on Black Friday and earlier.

“It shows the companies are not valuing their workers. They’re looking to their workers to squeeze out more profits,” said Carrie Gleason of Retail Action Project.

Wal-Mart Stores Inc., the world’s largest retailer, has been one of the biggest targets of protests against holiday hours. Many of the company’s stores are open 24 hours but the company was offering early bird specials that once were reserved for Black Friday at 8 p.m. on Thanksgiving instead.

A union-backed group called OUR Walmart was staging demonstrations and walkouts at hundreds of stores on Black Friday.

But retailers said they are giving shoppers what they want. A Wal-Mart spokesperson said the discounter learned from shoppers that they want to start shopping right after Thanksgiving dinner. Then, they want time to sleep before they head back to the stores.

Many shoppers welcomed the chance to shop before midnight or in the wee hours of the morning.

“I think it’s better earlier. People are crazier later at midnight. And I get tired at midnight,” Renee Ruhl, 52, a hotel worker, said at a Target in Florida, where she was already heading back to her car with an air hockey game loaded in her shopping cart at 9:30 p.m., or two and a half hours before the chain opened last year.

Wal-Mart’s discount stores, which have been open on Thanksgiving Day since 1988, offered some Black Friday deals at 8 p.m. and special deals on some electronics, like Apple Inc. iPads, at 10 p.m. Toys R Us opened at 8 p.m.

The earlier hours attracted customers who had not previously considered braving the crowds on Black Friday. Warm weather was also likely helping to bring out the crowds.

Big ticket electronics were not the only hot sellers.

At Macy’s in Herald Square, the line at the Estée Lauder counter was four deep shortly after its midnight opening.

And at the Target on Chicago’s Northwest side, the $25 Dirt Devil vacuum that normally goes for $39.99 was gone, while there were still several large televisions. Items such as $2 towels were selling well, so were blankets, kids’ slippers and pajamas.

Store team leader Lee Crum said it looked like people who were there for the 9 p.m. event were staying longer.

“These are the folks that are Christmas shopping; you can see it’s a family event,” he said.

The stakes are obviously high for US retailers.

Consumers remain worried about high unemployment and possible tax increases and government spending cuts in 2013. Also, the lasting effects of Superstorm “Sandy” could cut into how much shoppers can spend.

According to a Reuters/Ipsos poll, two-thirds of shoppers said they were planning to spend the same amount as last year or were unsure about spending plans, while 21 percent intend to spend less and 11 percent plan to spend more.

Not everybody was happy with Black Friday starting earlier.

A petition asking Target to “save Thanksgiving” had 371,606 supporters as of Thursday afternoon.

Mike Labounty, 34, was shopping on Thursday night for 32-inch Emerson televisions and other items on sale at the Wal-Mart in New Hampshire.

“I think it should go back to Friday,” he said. “It breaks up families. Just look at us—our kids are with their grandparents and they should be with us on Thanksgiving but we’re here getting them a TV.”

Black Friday openings have crept earlier and earlier over the past few years as stores have experimented with ways to compete with online rivals like Amazon.com that can offer holiday shopping deals at any time and on any day.

The earlier hours are an effort by stores to make shopping as convenient as possible for Americans, who they fear won’t spend freely during the holiday season because of economic uncertainty.

“I ate my turkey dinner and came right here,” said Rasheed Ali, a student in New York City, who bought a 50-inch Westinghouse TV for $349 and a Singer sewing machine for $50 at Target. “Then I’m going home and eating more.”