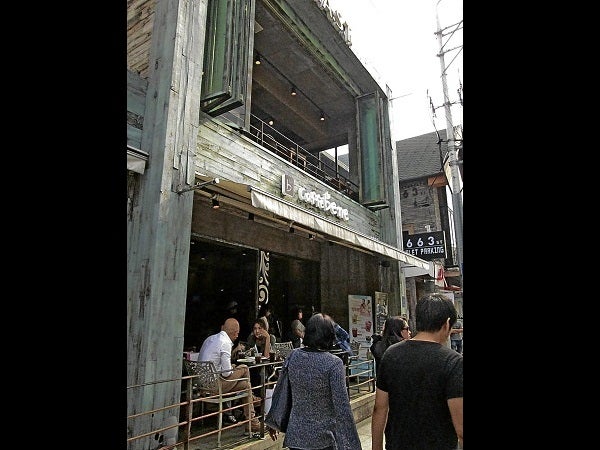 Yeah, it’s everywhere. And by that, we mean everywhere. Those who have been to Seoul have most likely seen a Caffe Bene shop at every corner. Plus, Koreanovela fans might recognize the café from the kilig-inducing “crème kiss” scene in the romance/drama “Secret Garden,” where the male lead kisses the cappuccino foam off his lady love’s lip.

Riding on the coffee shop culture craze in Seoul, Caffe Bene has put up over 800 stores and counting, making it the fastest-growing South Korean coffee shop chain to date.

Good news for Pinoy coffee addicts: Caffe Bene will  open two branches in Manila—on Nov. 29 in Eastwood and at the SMX Convention Center in Pasay.

Super recently went on an “immersion trip” to Seoul, where we got a sneak peek at the phenomenon that’s been popping up like daisies all over South Korea and beyond.

We first paid a visit to the four-story Bene Cup Coffee College at Jongguk-dong in the district of Gwangjin. There we got a behind-the-scenes look at how Korea’s no. 1 coffee franchise came to be. (Yup, it’s already beaten Starbucks in that part of the world.)

We got the chance to brew our own Americano blend from scratch using those huge, high-tech espresso machines; pressing buttons might be easy, but getting the hang of it is actually much harder than it looks. We were told that the barista course they offered consisted of five days of intensive training in the art of coffee brewing and pastry making, Caffe Bene style.

One can also have options for “further studies.” They really do take their coffee seriously in these parts. This was probably where and how the infamous “Psy latte”—a caricature of Psy’s face in a cup of coffee—was made.

After our morning tutorial session, we were taken around the busiest parts of Seoul for some store-hopping. The first branch we visited was in COEX Mall, Seoul’s huge underground shopping complex; this particular branch was one of two outlets with an in-house bakery, offering a wide variety of bread and pastries like the Oriental Foccacia (black bread made with squid ink), dessert bestseller Green Tea Bingsu, and seasonal drinks like the Sweet Potato Latte, which was surprisingly good.

Next, we hied off to the multilevel branch in Gangnam’s swanky Apgujeong neighborhood—the “Beverly Hills” of Seou. Its top floor houses the partner agency iHQ, the film and media arm of entertainment firm SidusHQ (who manages Jay Park). It’s actually one of the best places to people-watch, because you never know which Korean celebrity or K-pop up-and-comer you’ll bump into.

We also checked out the other branch with a bakery in downtown Gangnam; the café was packed on a Saturday night, from young couples sharing huge bingsus to families having dessert post-shopping, to barkadas loading up on caffeine before a night-out.

We got the chance to talk to Caffe Bene’s youthful-looking founder and CEO, Kim Sun Kwon, who told us via an interpreter how the idea came to be.

Inspired by a tiny seaside café he’d discovered while living in Vancouver for three years, he thought of starting his “calming, cozy” coffee brand that would appeal to  local and global markets.

The first cafe opened in 2008.  In addition to the 822 stores in Korea, they’ve also set up shop in Manhattan, Los Angeles and Beijing, with more branches across the US and Asia in the works.

Thanks to the efforts of Citicup Corp. president Desmond Chua, the franchisee of Caffe Bene in the Philippines, Mr. Kim was convinced that the Philippines would be a great market to tap.

Caffe Bene’s curious little mascot, Befy, adds a cutesy touch to the brand; a wide-eyed purple animal that looks like a cross between a duck and a deer with antler-like wings on his head, Befy represents freedom and friendliness.

This “young” franchise has already set itself apart from the hundreds of coffee shop brands in Seoul. It’s easy to see why.

A Caffe Bene shop is a place to see and be seen. Also, the cozy atmosphere actually invites you to relax and stay awhile rather than hurry up and leave, which is why it’s become ideal for study sessions and business meetings.

The European-style interior is in warm earth tones, with wooden furniture and soft yellow lighting. Bookshelves and strategically placed plants or mini-gardens enhance the homey feel; you feel like you’re hanging out in a friend’s place.

Freshly made every day

It prides itself in creating everything fresh, from scratch, from growing its coffee beans to making its pastries. The items don’t come cheap, but as with most hip hangout venues, you also pay for the ambience.

According to Mr. Kim, you can ask any Korean what type of coffee they like, and seven out of 10 will most likely order an Americano. Caffe Bene’s signature blend is the medium-roast espresso, good for those who don’t like the bitter aftertaste of most brews.

Their Italian gelato is surprisingly light but packed with flavor, and their Liège waffle has a chewy, slightly half-baked consistency that’s so addicting, especially when topped with gelato. It comes in Classic or Walnut, which adds great texture.

More than just serving good coffee, Caffe Bene is a prime example of the rapid rise of Korean culture and its influence across continents. With more and more stores set to open in several other countries, this Korean premium coffee franchise seems poised to take on—and take over—the world, one caffeine addict at a time. After all, who can say no to coffee, waffles and gelato?