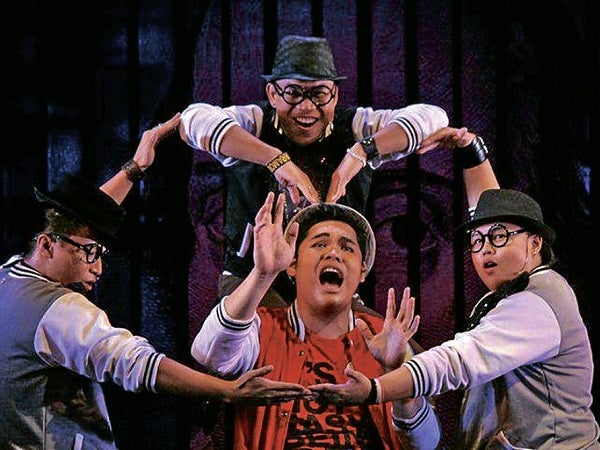 “Stageshow” by Mario O’Hara is first and foremost a Broadway show for the Filipino. Yet, during its initial run last month, it had the misfortune of competing with “The Phantom of the Opera,” which played to packed houses night after night right above it.

How fate bitchily makes use of its metaphors. For had the audience of “Phantom” also paid as much attention to this player at the CCP Little Theater, they would have been treated to a dazzlingly coherent act of acts, a melange of overflowing artistry that all the more made sense as a whole.

Shamaine Buencamino left not a single emotion untapped in her virtuoso turn as Ester (in some distant way, it might as well be her “Sophie’s Choice”), but an even more fiery star burned in husband Nonie Buencamino, who flirted, tap-danced, philandered, and died his way to dizzying actorly heights, culminating in an explosive redefinition of “performance” in “I’m Gonna Live Till I Die.”

“William,” meanwhile, a play that makes adroit use of rap to tackle Shakespeare in the public school classroom, was a charmer from start to finish. In transposing Shakespeare’s stratospheric English to commonplace Filipino, to the tongue of the ordinary Manila pedestrian, the sidewalk hagglers, the manangs who run the market stalls, the play successfully delivered the Bard and his works to the plate of its hormonal teenagers in fresher, less complicated fashion.

The ingenious set: Chairs. They become school lockers, other forms of furniture, even entrance/exit archways. A student enters, the teacher says to him: “Ay wala nang upuan. Sige, pitas ka na lang diyan.” If money can’t grow on trees, at least chairs can.

For these two productions—rerun, please!

The author is an Integrated Liberal Arts and Medicine (Intarmed) student of UP-Manila. This review first appeared in his blog, http://vincengregorii.blogspot.com/.