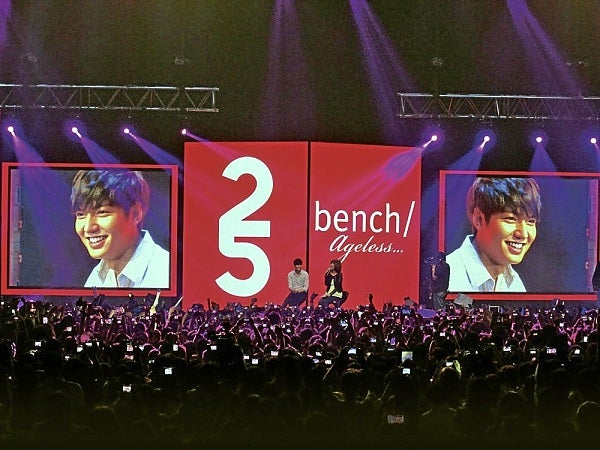 Queueing as early as 5 a.m.–that’s Minho mania in Manila

How far would you go for your idol? For Korean heartthrob Lee Min Ho, many lined up as early as 5 am outside the Smart Araneta Coliseum to nab a spot closest to the stage.

Some came straight from school or work; others made the long trip from the provinces. One doctor snuck out from her night duty and, like the thousands of fans filling the venue, braved Friday night traffic and MRT rush hour just to be under the same roof—and in the same breathing space—as the superstar.

Super even played Santa and gave away tickets to forlorn-looking solo flighters who had spent so much time, effort and money to get Patron invites, only to be told that there were no more tickets left.

We sure hope they were able to get in, because inside the venue, it was complete madness. Giddy teens eagerly posed with the life-size standees near the entrance. Meet-and-greet winners old enough to be mothers of the other winners were crying happy tears before, during and after the show.

Our favorite fan display of the night? A sprightly 75-year-old in a black “I love Minho” shirt squealed like a young girl on live TV at the thought of getting a kiss from the hallyu star.

Yup, that’s Pinoy passion for you. The Korean wave really has hit this country hard.

As Bench’s newest endorser, Lee Min Ho met his fans at the Bench Fun Meet last Nov. 16. For minimum single-receipt requirements from participating Bench and Fix stores, fans got free invites to be exchanged for tickets. Lucky winners got the chance to interact with their idol onstage via a raffle draw before the event.

After a K-pop dance medley by local talents (which—it was baffling—included a Conan the Barbarian-type “Psy” taking off his jacket and gyrating to “Gangnam Style”), the star came out amid stage smoke and deafening squeals.

Clad in polo and jeans, hair in the short, sleek style he’d sported during his “City Hunter” days, he sat down with host and interpreter Sam Oh for a chat. Pinoys got to know a bit more about Minho as he answered a few questions submitted via Twitter.

The handsome superstar looked calm for the most part, but whenever he laughed, his face lit up like a little boy’s, all bedimpled, carefree and utterly charming. Plus, he seems to genuinely care for his fans. At one point, he noticed a small scuffle in the Patron area and interrupted the Q&A to ask the crowd if they were okay, adding “take care” because he didn’t want anyone to get hurt. Oh had to interpret for him, but the concern on his face said it all.

Minho is more popularly known as fearless F4 leader Gu Jun Pyo in “Boys Over Flowers” and the brooding titular character in “City Hunter.” The 25-year-old actor had just finished filming the fantasy drama, “Faith,” where he plays Choi Young, a Goryeo-period warrior who travels through time to find a doctor who can save the queen’s life.

Even before he was approached by Bench, he’d already been getting tweets and messages from Filipino fans asking him to come to Manila. Saying yes to Bench, naturally, was a no-brainer for the star; he said that apart from the fact that the clothes were stylish, it was a good opportunity for him to meet his fans here.

“Bench is the best brand in the Philippines,” he said firmly in Korean, when asked how he’d promote the brand to Koreans back home.

The first thing he does every morning: Feed his dog, a brown mini-pinscher named Choco.

What he likes to do when not working: Stay home and watch movies or play video games, or go for a walk.

Favorite Korean food: Chigae, a type of Korean stew. We hear he loves his mom’s cooking very much.

Favorite Filipino food: Adobo. Or at least, he now likes it. He asked the crowd what Filipino food they’d recommend for him to try and, predictably, everyone shouted adobo. He did have it for dinner after the fan meet, and posted a photo on Twitter looking very much like he’s enjoying it.

Place in the Philippines he wants to visit: Boracay. “Anyone want to join him?” Sam Oh impishly asked the audience. You bet.

Dream roles: The last two characters he’s played (in “City Hunter” and “Faith”) were sad, heavy, “men with a dark past” types, so he’s hoping to play carefree, happy ones for a change.

On being vain: He doesn’t consider himself vain, but confident. He wants to look good for his fans. Plus, he also exercises.

On Pinays: “They’re very passionate, but a little shy,” he observed, but added in all seriousness that he wouldn’t mind having a Filipina girlfriend. In fact, he thinks it’s a very good idea. Cue wild screams.

What he wants to learn how to do: He sheepishly admitted that dancing is one of his frustrations. He even told the crowd how he’d attempted to dance in a previous fan meet, and got laughed at. Awww.

After the Q&A, he joined a few games Bench had cooked up for lucky fans. It included a lookalike contest and an “Act That Scene” challenge, where he got to judge creative video entries of female fans reenacting a pivotal moment from “City Hunter.”

The highlight was the staring contest, where a tiny fan stood her ground against the 6’1” Minho and his megawatt smile, and actually won. We’re surprised she didn’t melt into a puddle at that point.

The event proper lasted an hour. Looking very reluctant to leave the stage, he expressed how “bitin” it was and that he looks forward to coming back and spending more time with the fans. He took his time walking from one end to the other, saying “Thank you” over and over again, and even asked Suyen’s Miguel Pastor to take his picture with the crowd in the background. “Mahal ko kayo,” he said in earnest, and the crowd went nuts for the nth time that night.