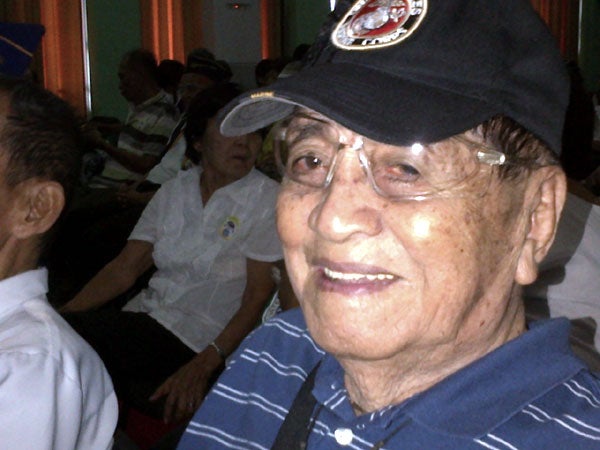 MANILA, Philippines – For his age, war veteran Miguel Perez is healthy and fit. His secret? Walking for a few hours a day.

Perez was referring to SM City North Edsa, located a few blocks from his residence at Project 7 in Quezon City. He walks around the mall daily at 4p.m. and is home by 7p.m.

His memory is still sharp, his strength at 90 is astonishing. He was once a prisoner of war by the Japanese, where he claimed he was held captive for six months.

He was one of the Filipino soldiers placed under the command of the United States Army Forces Far East six months before Japan attacked Pearl Harbor in Hawaii in December 1941.

Perez recalled he was 18 years old at that time when he did Cadre training course after finishing highschool in Calapan, Mindoro.

Perez was one of the survivors from the long trek from Bataan to the prison camp at Camp O’Donnell in Capas, Tarlac, known in history as the Bataan Death March.

The march to Tarlac led to thousands of deaths along the way.

During the incarceration, Perez and his Filipino and American comrades at Camp O’Donnell suffered from several illnesses, where at least 200 men died per day because of lack of food and medical care.

He said most of them experienced several illnesses at the prison camp.

Perez said he did not know how he lived through the ordeal.

Life after the war

The veteran would later develop ulcer, which he attributed to the hunger he suffered during the war. He only had his surgery in 1989, two years after he retired from working.

Perez said his ulcer had gone to worst which prompted the surgery.

He retired in 1987 at the age of 65 as an information clerk at Veterans Memorial Medical Center (VMMC). He quit the military service in 1954 for financial reasons and started out as a security guard a year later at the same hospital.

Perez, now a widower, has seven children. He receives four pensions a month from the Philippine and American government.

At 90, Perez said his only health problem was diabetes, but which he said was under control.

Perez was one of the 300 beneficiaries of Pfizer Philippines’ Prevent Pneumococcal Disease Campaign held at the VMMC early this week.

The participants, which included war veterans and their dependents, were given free medical tests such as BP screening, BMI check, cholesterol and FBS screening.

Adult pulmonologist Dr. Glenda Pereira also gave a lecture on preventive health practices and its importance, such as the need for vaccine.

“Symptoms of some of the most invasive diseases are often ignored, as patients experience common cough or pains. Little do they know, however, pneumococcal disease, including pneumonia, often produce such symptoms,” she said.

Pereira recommended the need for vaccination, especially for seniors, as immune system weakens and becomes more susceptible to infectious diseases such as pneumococcal pneumonia.

The vaccine used the “newest technology” and at the same time will “increase memory cells that will lead to longer protection,” said Joy Tiangco of Pfizer Philippines.

The new vaccine of Pfizer has no need for re-vaccination unlike its predecessor, which is re-vaccinated every five years.

Although still available in doctors, the old vaccine for pneumonia was launched in the 1970s.

“There’s really a need for a new vaccine,” Tiangco added.

“There’s a study that the earlier you give it mas madami memory cells na ma-produce for protection,” she said.

Pfizer’s pneumococcal disease vaccine was granted by the US Food and Drug Administration approval in December 2010 as a single dose for use in adults. It is indicated for adults 50 years old and above for active immunization for the prevention of pneumonia and invasive disease caused by Streptococcus pneumoniae.