Hotel-hopping to ring in the holidays | Inquirer Lifestyle ❮ ❯ 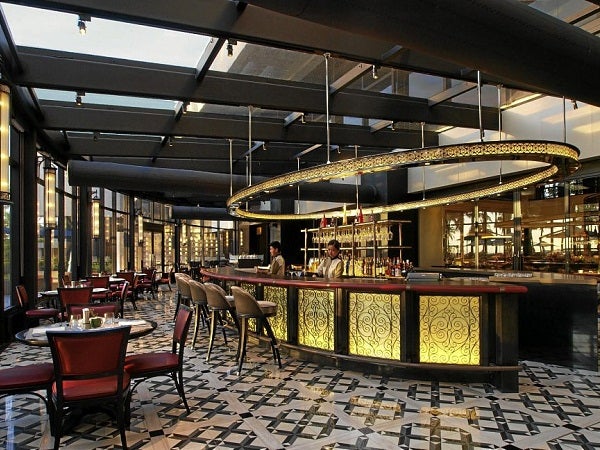 Hotel-hopping to ring in the holidays

The Christmas spirit has finally hit me with so many tree-lighting festivities and charity bazaars in different hotels. After checking out the options for ornaments and color schemes, I have decided to make Paris as the theme of our décor.

With all the delicious French cuisine, having a Parisian-theme party would be wonderful. And after scoping the incredible culinary landscape of the new Spiral at Sofitel Philippine Plaza, I had even more creative ideas.

The reopening of the $11-million dining destination Spiral was witnessed by the crème de la crème of Manila’s society, who were dressed to the nines in their black tie and gowns. The new Spiral has never before been seen in Asia, with 21 dining ateliers that offer a gastronomical journey around the world.

The vision behind it, Sofitel Philippine Plaza general manager Goran Aleks, gave his opening remarks, which concluded with a flash mob of more than 150 dancers bursting out of the audience from different directions while dancing to an upbeat mash-up of jazz and funk.

For the grand reveal of Spiral, the Master Chefs led by executive chef Eric Costille were introduced one by one as silk drapings and sound effects revealed the different exciting dining ateliers.

For a truly magnificent evening, international jazz singing sensation Kevin Lettau was flown in especially for the Spiral opening. She delighted the A-list crowd with her soulful renditions of her most memorable songs including “Sunlight,” “Bridges” and “Sana Maulit Muli.”

The star of the evening, the 21 dining ateliers, was revealed with fireworks at the Spiral sculpture. As each atelier was revealed, the guests were thrilled to discover such an international culinary marvel in the heart of Manila.

Over at another grand hotel, Makati Shangri-La hosted a festive evening for this year’s Christmas Tree Lighting. Shang GM Reto Klauser welcomed guests into a lobby that was all decked out with fully adorned Christmas trees and life-size golden angels.

I made sure to be present at the tree-lighting ceremony, which also set a donation for Haribon Foundation. Since angels were the theme’s event, I entered with my own gigantic pearly white metal wings.

Still at another splendid hotel, Dusit Thani Manila aims to make another memorable and meaningful Christmas celebration this year with its third Christmas Tree Contest. This year’s theme is “A Hundred Voices. Ten Hopes. One Christmas Story,” by which the hotel defines its Christmas spirit through the creative hearts and minds of children.

Participating schools represented by their grade school students and members of the faculty provided their very own symbolic Christmas tree. These trees are now on display at the hotel lobby until Dec. 28. All of them are quite unique, having used recyclable materials.

The winning entry gets a donation to the school, and I am rooting for Puno ng Pangarap Tree by Divine Healer Academy, Cabid-an, Sorsogon. Made of bamboo poles and stars fashioned from bamboo branches, the symbolic tree was done in Sorsogon with the assistance of Fr. Gerard Deveza.

Please support any one of the trees. Check out details on the Dusit Thani Manila Facebook page or www.dusit.com and vote for your favorite tree.

The grandest tree lighting of them all is the Coca-Cola Tree Lighting Event at the Araneta Center. This annual gathering of fun and celebration was in line with Coca-Cola’s vision of turning ordinary occasions into magical moments of happiness.

Capping off Coke’s 100th-year celebration in the country, a Grand Christmas Salu-Salo was prepared with a pre-Noche Buena food fiesta spread. Coke and Araneta Center officials joined a roster of Kapuso and Kapamilya stars in enjoying yummy treats.

Cecile Alcantara, president of Coca-Cola Foundation Philippines, shared the news about its elementary school project in Negros Oriental, while Coke president Guillermo Aponte also gave an inspiring message that highlighted the value of spreading happiness throughout the year.

The Christmas season would not be complete without shopping in charity bazaars and looking for assorted gifts and food items. The ongoing Noel Bazaar at World Trade Center has numerous booths carrying lots of gift ideas.

Speaking of gift ideas, I found premium bags and accessories for travel and business at the second branch of Tumi in Bonifacio High Street. Tumi’s first branch is at Greenbelt 5.

The opening of the Tumi Store was also the perfect occasion for the launch of the Fall 2012 collection. The fashion show highlight was the Dror collection made up of hardside cases and soft travel and business bags. Most notable was the International Expandable Carry-On, Tumi’s first foray into making an expandable zipper-less hardside case.

The night’s festivities continued long after with Manny O Wines and ambient music. The Primer Group of Companies, Asia’s next retail giant, is the exclusive distributor of Tumi in the country.

Greenbelt 5 houses so many shops with great gift options to complete your Christmas list. Swatch is my all-time favorite Christmas stocking stuffer, especially for those friends who have it all.

Specially made Swatch watches for different schools are on sale now. Part of the proceeds of Assumption Swatch sales went to the Assumption ’81 Foundation. Swatch Queen Virgie Ramos handed me the donation at the “Skyfall”-theme birthday party of Rowell Santiago.

After shopping in Greenbelt 5, I checked out the Main Gallery for the annual exhibit of the graduating students of Slim’s Fashion & Arts School. Get a glimpse of the fashion industry’s future players until Nov. 27.

Slim’s has always focused on technical skills that empower students to develop their own styles. This method has produced thousands of graduates over five decades who’ve moved on to open shops of their own or work for other establishments. The school’s track record is well-known, with Cesar Gaupo, Joey Samson, Michael Cinco and Ezra Santos on the long list of prominent alumni.