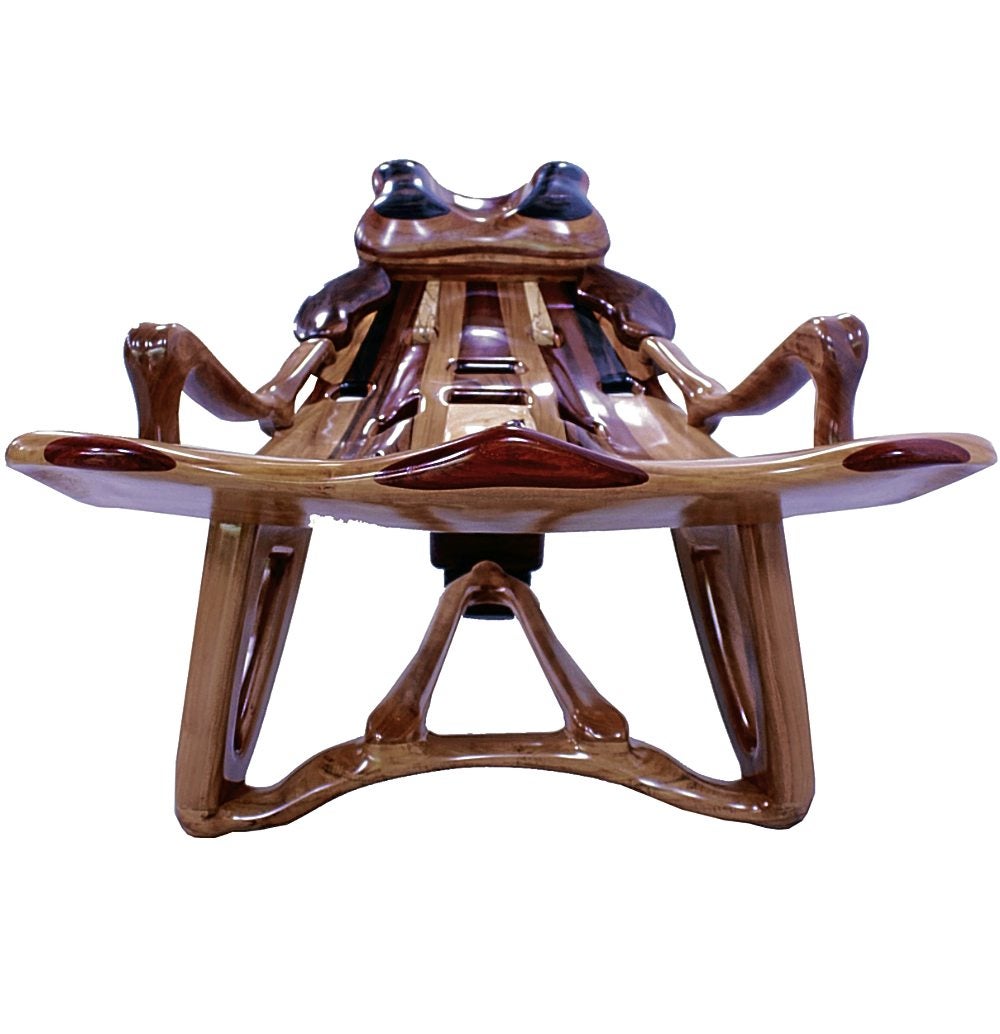 All that the Dormouse ever said about eating was “Pass the butter.” But he could as well have advised Alice, “Feed your head,” meaning her to turn on.

Because Lewis Carroll was a suspected lotus-eater (laudanum, absinthe, tincture of opium, lysergide, whatever). And his “Alice’s Adventures in Wonderland” and its sequel, “Through the Looking-Glass, and What Alice Found There,” merely confirm the connection between the books’ complex dream atmosphere and the mind-altering drug experience.

Incidents of hookah-smoking, mushroom-eating and bottle-drinking that crop up in those children’s books can’t be anything but sly references to that hallucinogenic vision.

Those who seek a natural high through art could turn on to Niccolo José’s “Wonderland,” 23 sculptural pieces in wood ranging from furniture to wall décor to free-standing sculptures, until Dec. 1, at Altro Mondo, L/3, Greenbelt 5, Ayala Center, Makati City.

This is José’s first exhibit in an art gallery, positioning him as an artist, from being merely a highly skilled furniture-maker. Here he leads viewers into the rabbit-hole, opens the door of perception, and floods the gallery with the abundance of his imagination.

The collection references the “Alice” books, which the 26-year-old artist says were his favorite when he was a child. But this isn’t simply a whimsical evocation of childhood, because there’s enough gravitas here to lift the roomful of furniture to the status of art that lasts.

Because here, as he confides, the artist is exploring themes of “maturity, adaptation to the environment, direction in life”—precisely what Alice has gone through to survive Wonderland.

Which dovetails with José’s manipulation of wood, his use of only reclaimed and recycled wood, his idea of increasing “public awareness for appreciating nature and sustaining our natural resources” by creating environmental and functional art.

“These pieces are examples of the potentials of eco-innovation,” he says. “They emphasize the high-quality carpentry, aesthetics and soulful intimacy of Filipino craftsmanship… My works reflect my personal growth in artistic skills and craftsmanship. They are about dreams, curiosity, playfulness and fun.”

Though mostly functional, the pieces look so whimsical and polished one would feel more comfortable putting them on display than actually sitting on them. The highly allusive furniture, especially, appear quite rarefied.

The fantastical imagery is based on the original John Tenniel woodblock engravings and the Disney animation. At first glance they look like distorted furniture, until one recalls elements, distinguishing marks, details from incidents and characters in the books. The pieces thrill, amuse, sometimes scare the child in us.

Each piece is traditionally made and handcrafted. Pieces of wood are kiln-dried, shaped by special machines, and put together only with dowels, pegs and glue, to give form to the figments of the artist’s imagination.

José says he spends 60 hours to finish an average piece, excluding the 48 hours it takes for the glue to dry. On a complicated piece like “Jabberwock” he spends a month.

Sanding is the most tedious process, using sandpaper with grit level 100-1,000. He applies as many as 20 layers of lacquer thinner on each piece, the drying of each layer taking an hour. The natural color of each type of wood is highlighted.

There’s a subtle interplay of tones in every piece achieved by blending light-colored and dark wood, such as narig side by side with tiger molave, or dao with makaasim, or sampaloc with mahogany.

“I’m inspired by the possibilities offered by wood and the sculptural quality of its language,” José says. “Wood is universal and unique.”

He had researched on indigenous species at the wood library of the UP Los Baños Department of Forestry, to learn about their history, characteristics, how they warp or dry, how one species reacts when placed side by side with another species.

For his pieces, he uses only native species, salvaged from his father’s trove of vintage hardwoods reclaimed from railroad tracks, street posts, pillars of old houses. A few of these are already extremely endangered, such as the mangkono (dark-toned and hardy, similar to ironwood).

José trained as a visual artist at Lewis & Clark College in Portland, Oregon, where he majored in Environmental Studies and Studio Art. He did carpentry, set design and stage construction.

When Tropical Storm “Ondoy” struck in 2009, he was drawn by a desire to return to his homeland and help rebuild the country by encouraging “sustainable integration of services” through his works.

To expand his repertoire of studio contemporary furniture and wooden accent pieces, he started planning and preparing for this exhibit in May.

“This exhibit showcases the warmth and natural beauty of wood, which work wonders in creating a sense of balance and calm in our surroundings,” José says. “Each piece has a soul of its own, reflected through the emotions expressed by people upon seeing it. They evoke very positive emotions and are therapeutic for the soul… The idea for the collection is to inspire and take people back to their childhood and their purest forms of imagination.”

And that’s how artisan becomes artist: by transforming—through craft and sheer power of the imagination—commonplace objects into enchanted furniture, thereby elevating the merely functional to the realm of the fine arts.